Lisbon's oldest district lies on the hill between the Castle and the river. It survived the devastating earthquake of 1755 relatively unscathed due to the firm bedrock on which it sits. The quarter's labyrinth of meandering narrow streets, alleyways and steep flights of steps retain an ancient street plan. Some of the buildings still stand on foundations dating from the times of the Visigoths. It was the Arabs who founded the hodgepodge layout of the district and awarded it the name "Al-hamma", meaning fountains or baths. When designing a replacement Baixa district following the 1755 earthquake Marques de Pombal based it on a geometric grid system. He is reputed to have said when looking upon the Alfama that Lisbon could really do with a second earthquake.

Today it's the old worldly charm of the Alfama that draws the visitors. The best way to experience this district is to get lost (which isn't too difficult), amongst the narrow cobbled, mainly traffic-free streets. Meander underneath hung washing and small archways, take in the sounds of canaries singing from their cages, marvel at the numerous flower pots which compensate for the lack of greenery. As you wander, you're sure to encounter a small square or a terrace (miradouro) from which to admire the city, a Fado bar from which the mournful music emanates and smells of grilled fish or meat cooking. On a cautionary note, be mindful of your wallet and camera. That said, the Alfama offers a glimpse into the past and an old-world cultural experience. Our sister website MADABOUTLISBON.COM will guide you there and introduce you to the best places to see and top things to do. | www.madaboutlisbon.com 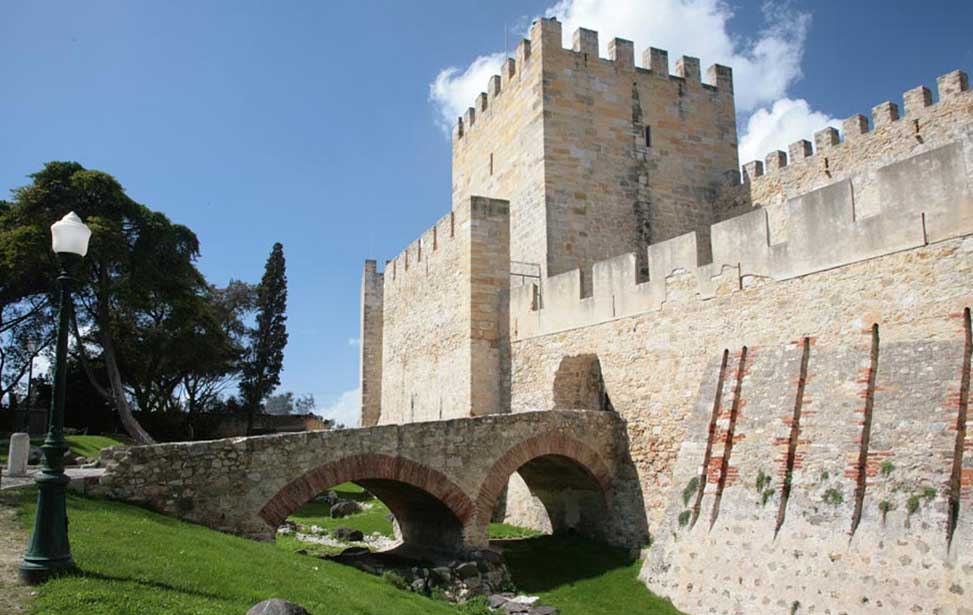 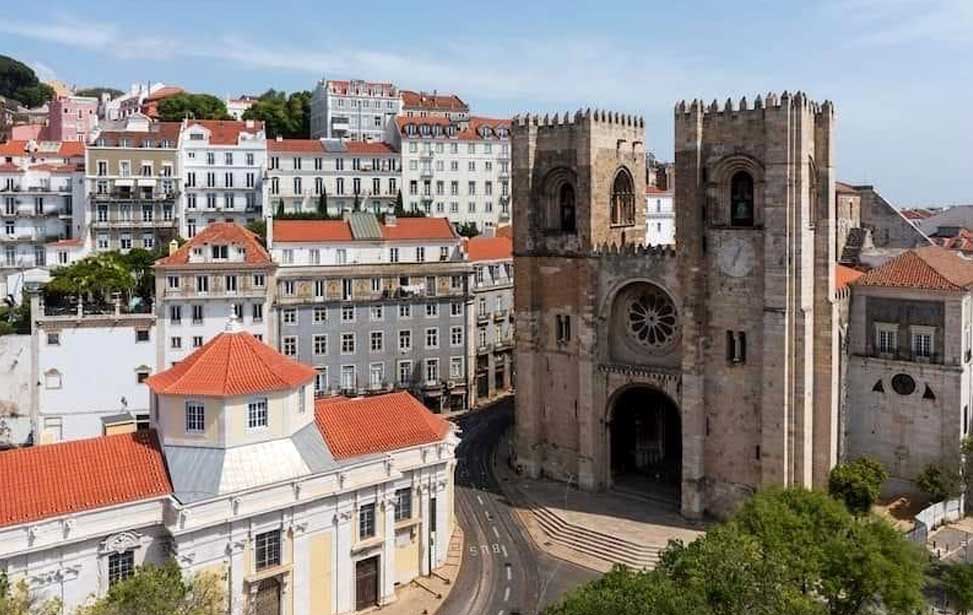 This 12th Century cathedral was built on an even older construction. 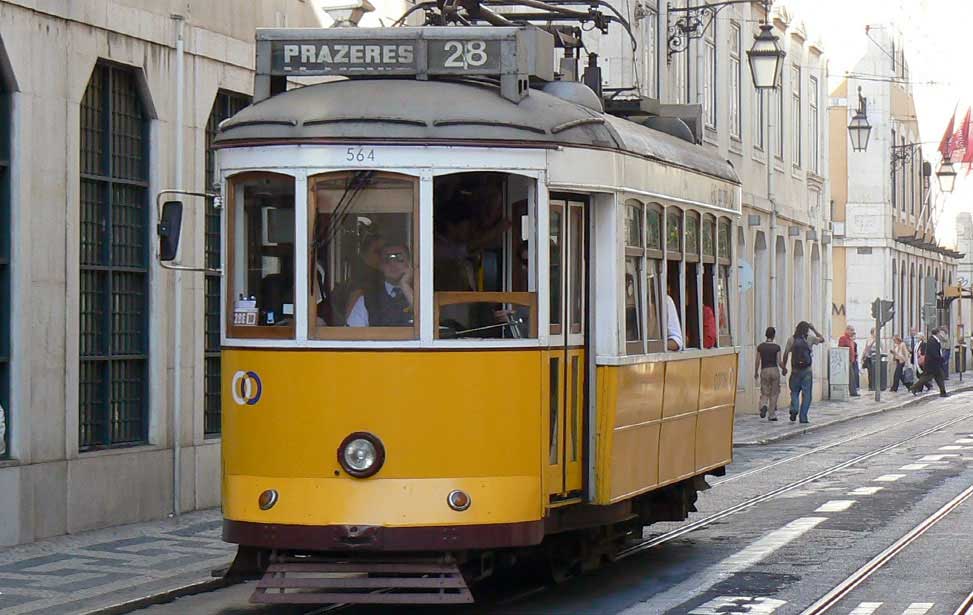 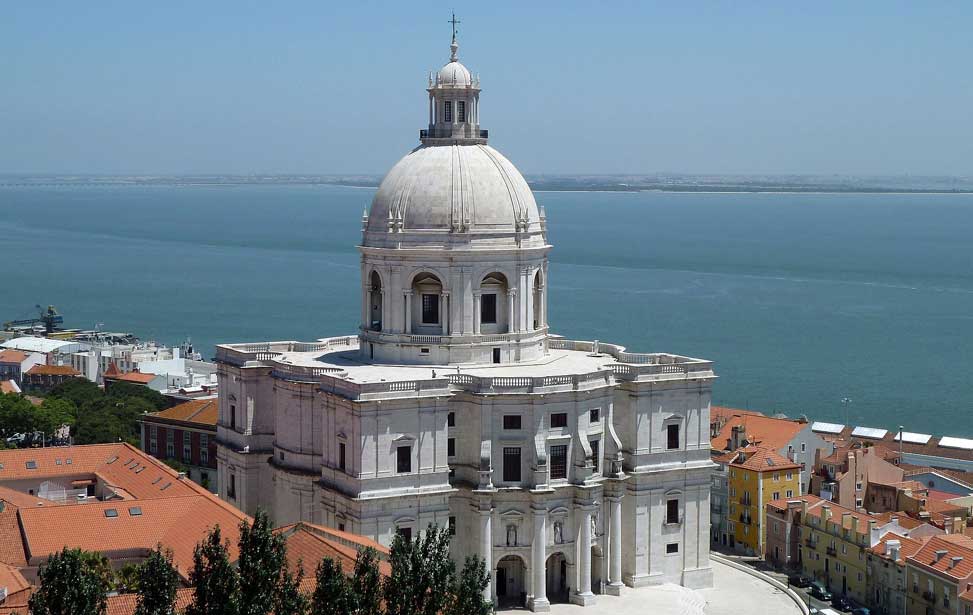 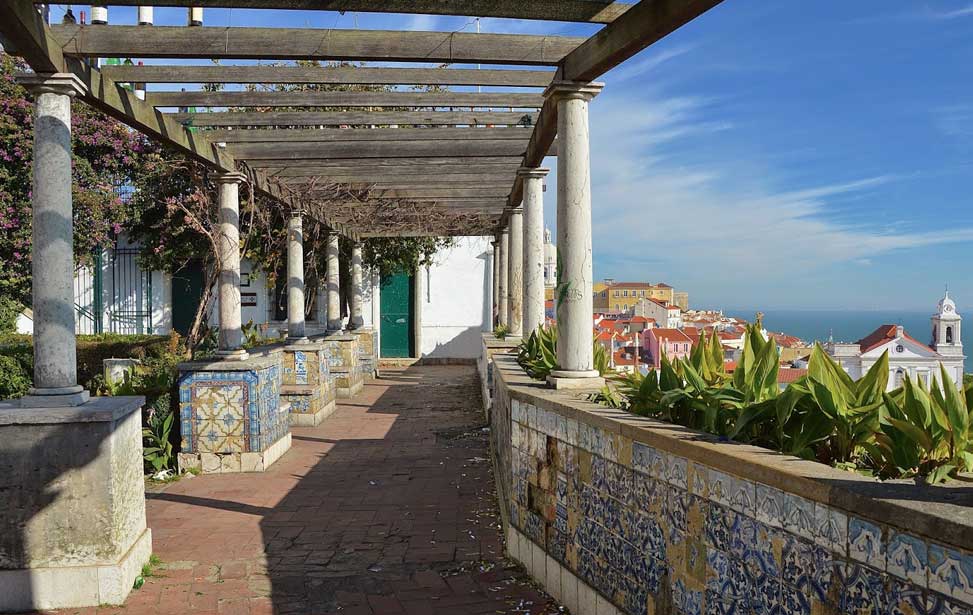 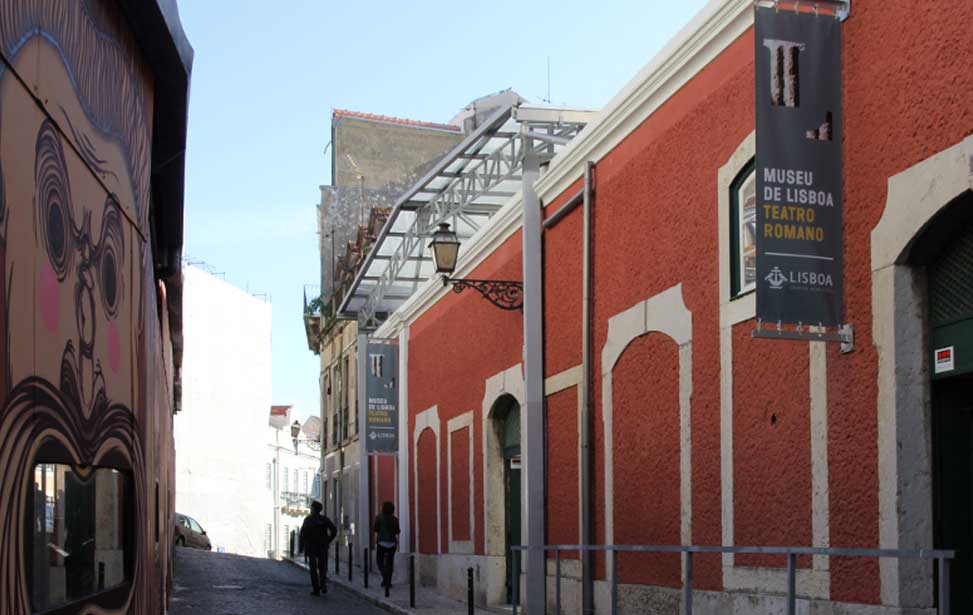 The remains of an 2000 year old ampitheate and it's dedicated museum. 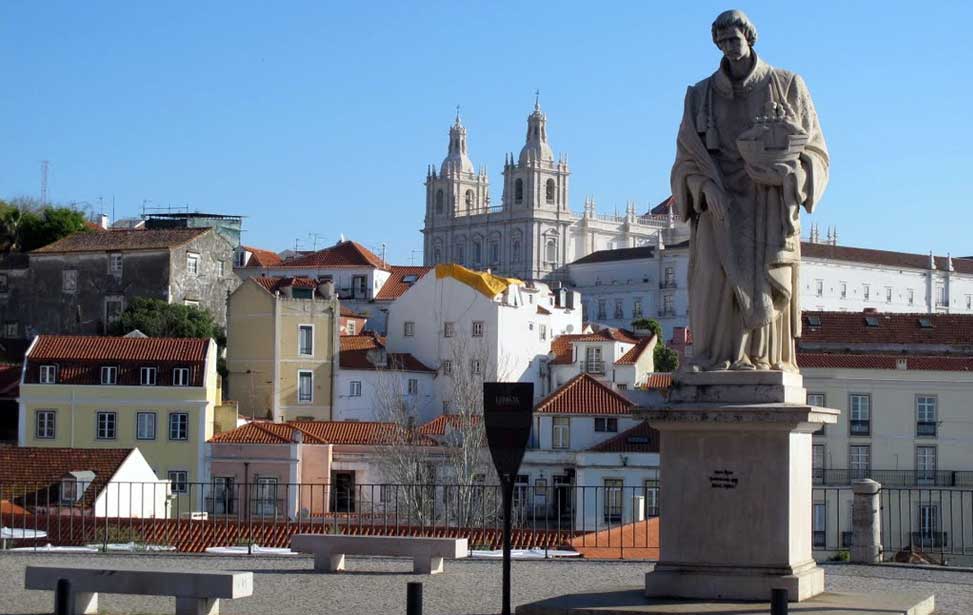 Take in the magnificient views from this vantage point. 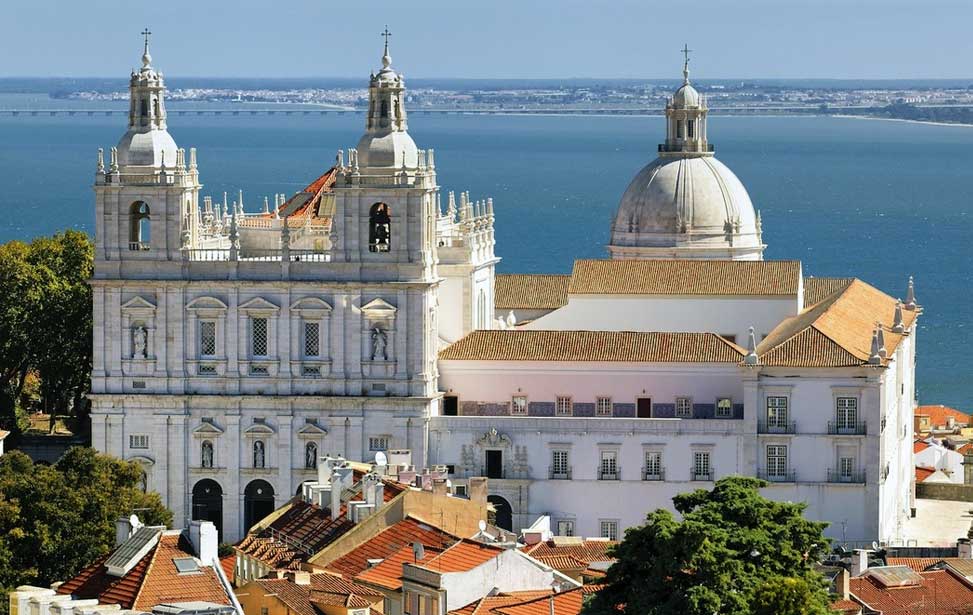 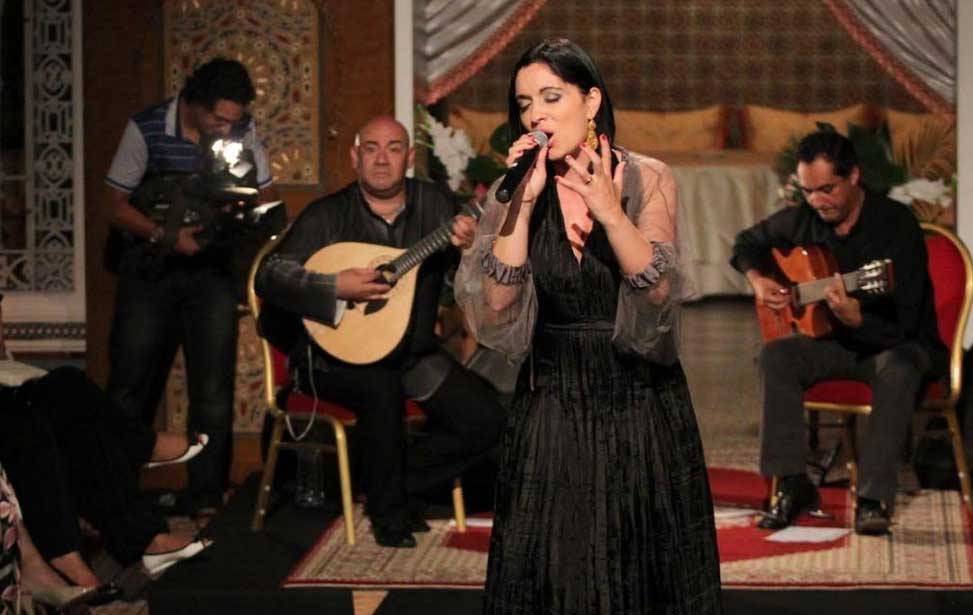 FADO IN THE ALFAMA

Fado's literal meaning "destiny" or "fate" is the embodiment of what the Portuguese called "to Saudade", too long for or to miss. A manifestation of a melancholic nature in the Portuguese psyche. Fado's origins are ambiguous. Some believe that it is descended from a woeful dance of Congolese slaves shipped to Brazil, or as some would have it, the forlorn character of Fado came from Portuguese seafarers who sang about home during their long sea voyages. In any case, Fado has a close association with the sea and grew in popularity in the early 19th century, primarily in the port areas of Lisbon, chiefly the Alfama. The district is still associated with fishermen. Fado is generally sung by a solo singer called a "faddista" and most commonly accompanied by the Portuguese guitar and the classical guitar. Click HERE for a list of Fado Clubs in the Alfama.

The Fado Museum is an indispensable stop for all those interested in discovering more about this form of musical expression so characteristic of Lisbon. The site houses several functional areas. A museum centre has a permanent exhibition, where modern museography and audiovisual recreations introduce the visitor to the history of Fado. There's an insight into how Fado is reproduced, how it is broadcasted on radio, recorded and its appearance in cinema. There are exhibits dedicated to the traditional instruments in the genre. There is an area dedicated to temporary exhibitions; a documentation centre; an auditorium; a theme shop complete with a coffee shop. | 728, 735, 759, 794. [ More About ► ] 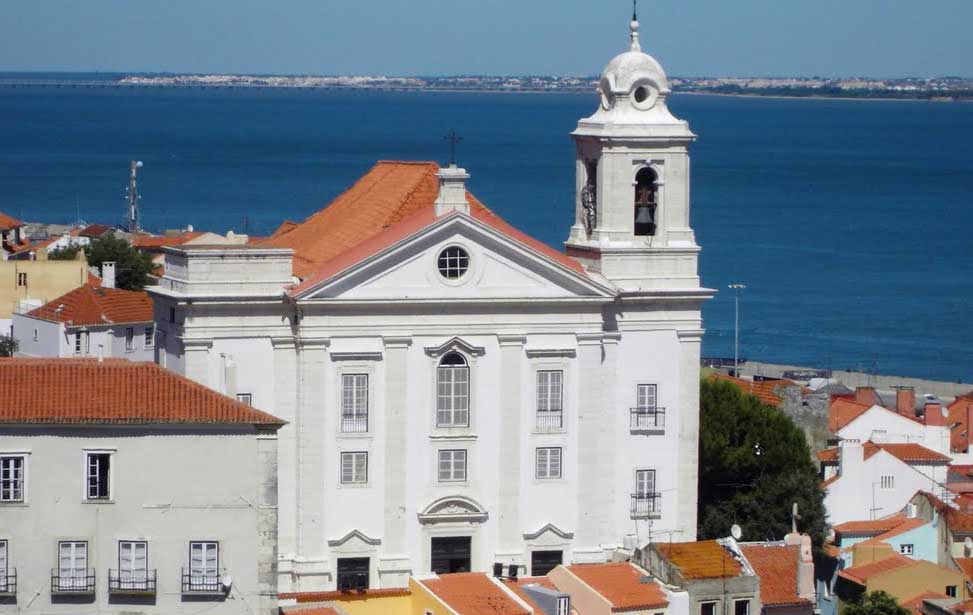 Classified as National Monument in 1918, the present Baroque marble structure was built between 1733 and 1740. It is constructed on the top of a 12th-century original. Rectangular in profile, it was designed by José da Costa Negreiros. Originally it had a pair of bell towers, but sadly one collapsed during the infamous earthquake. The surrounding terrace Largo de Santo Estêvão offers great views over the Alfama. Open for mass.

DOCA DO JARDIM DO TABACO

As the name suggests, this dockland development at the bottom of the Alfama district was Lisbon's main depot for storing tobacco. The warehouses which face the River Tejo have now been converted into restaurants, shops, bars and nightclubs. Its proximity to the Santa Apolonia train station and its riverside location makes Jardim do Tabaco an ideal spot for a sunset drink or meal. 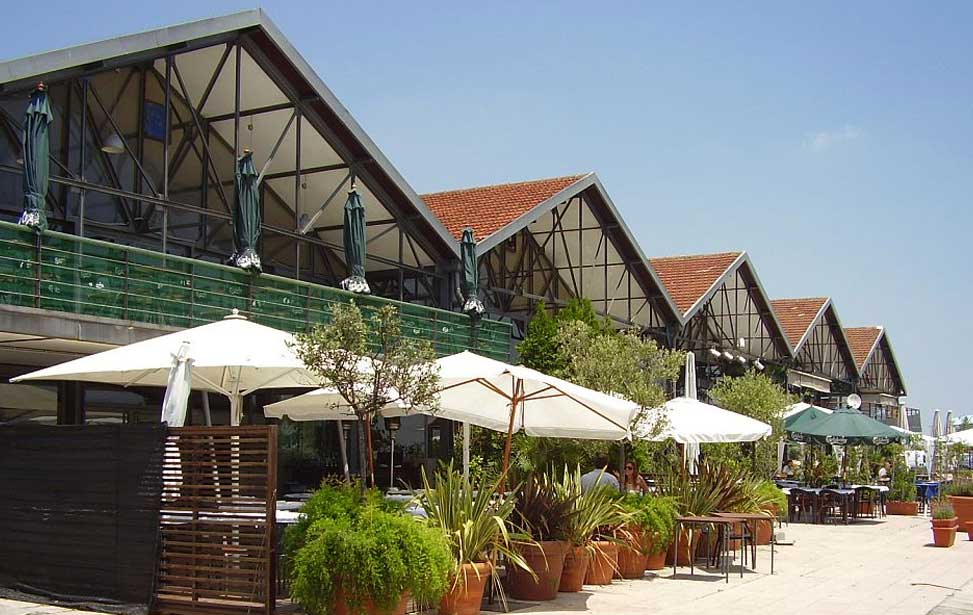 |   Doca do Jardim do Tabaco 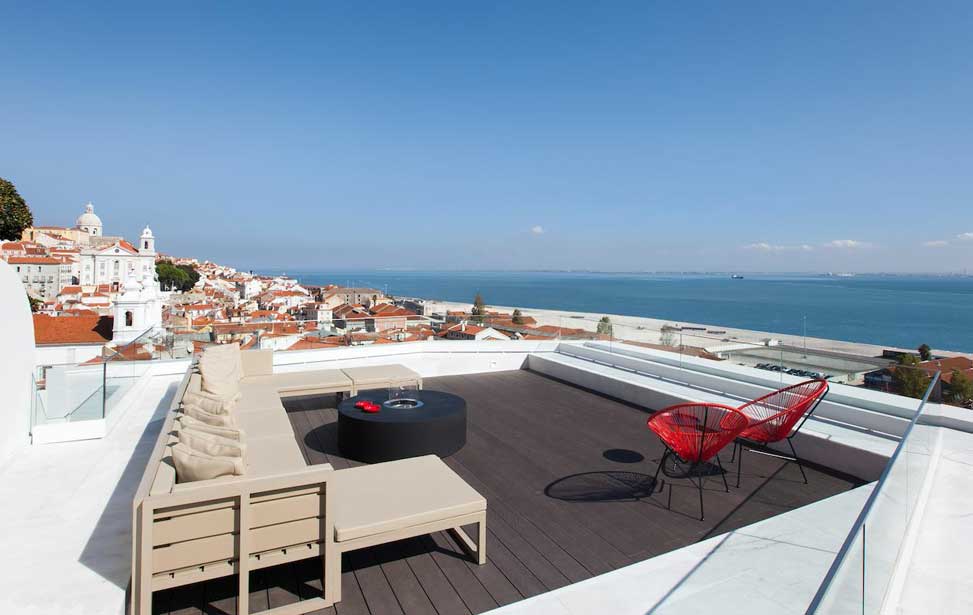 This hidden treasure in the heart of one of Lisbon's most picturesque districts has mastered the art of local integration, offering a truly authentic Lisbon experience with unmatched views of Alfama and Tejo River. 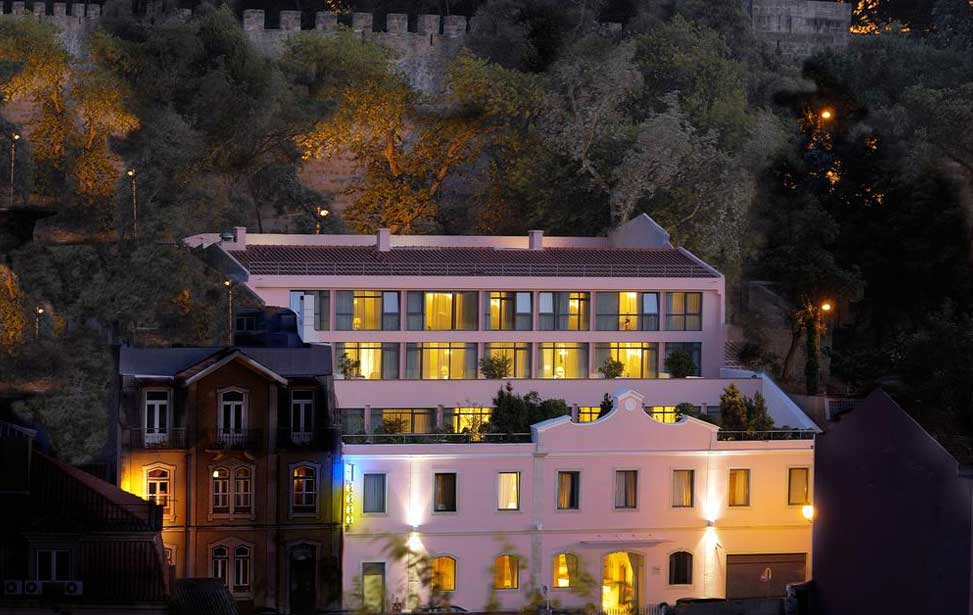 In the heart of Lisbon and ideally located inside the walls of St. George Castle, the Olissippo Castelo Hotel affords one of the most impressive panoramic views of Lisbon. The hotel is located in the famous Bairro do Castelo, between the well known Mouraria and Alfama quarters; it is also the perfect starting place to discover the Patron Saints Festivities which take place every June.

This special hotel combines the familiar atmosphere with modern technology. Above all, luxurious facilities and exceptional service together with the traditional art of Portuguese hospitality. 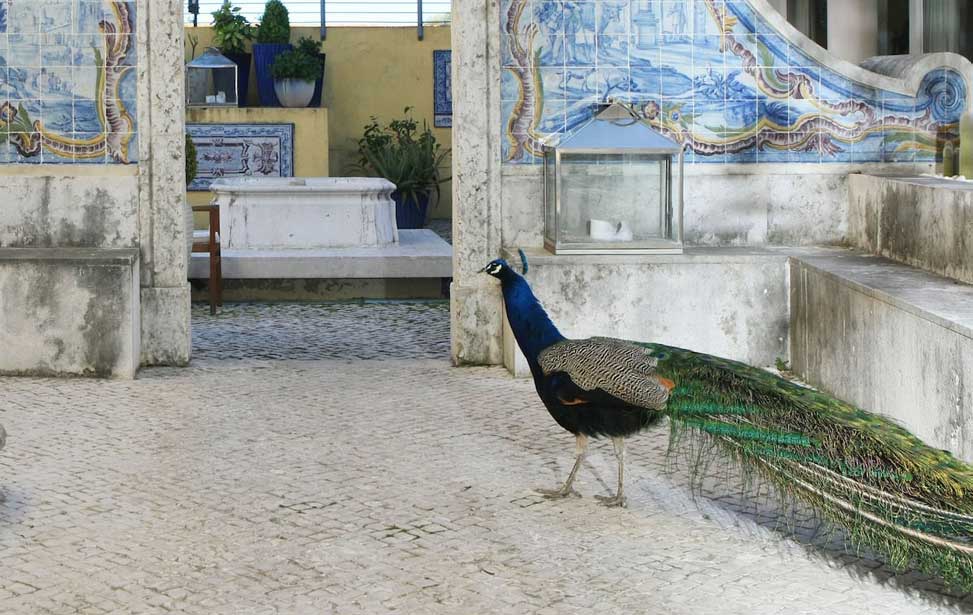 The only hotel within St. George's Castle walls, at the top of Alfama, Solar Do Castelo is a small Mansion built on the site of the former Alcaçova Palace. With two floors and a mansard, an inner courtyard and a garden, most parts of the furniture was specially designed for the hotel in a Medieval Contemporary style. You will find welcoming rooms offering complete modern-day comfort, such as free WiFi access. 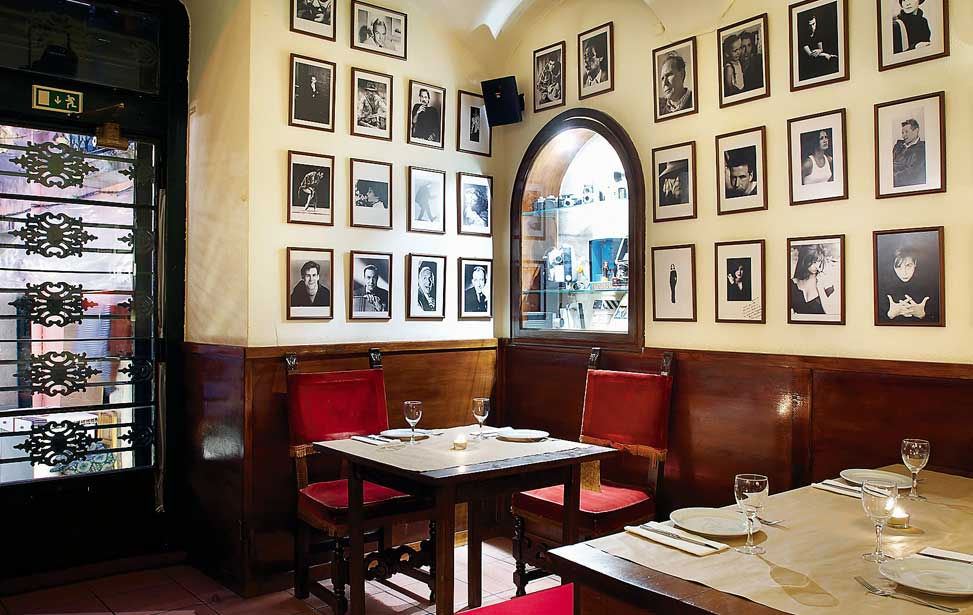 With an outside seating area under a vine arbour and inside the walls are covered with photos of celebrities. Ideally situated within the centre of the Alfama this popular restaurant has a friendly staff and serves traditional Portuguese and Mediterranean food. 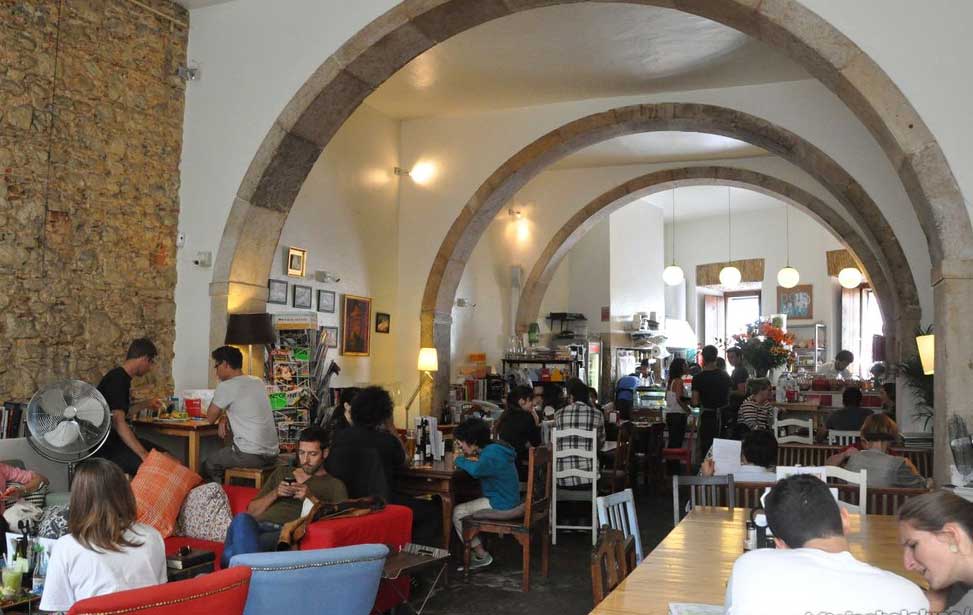 A pleasant bright little eatery in the Alfama with friendly staff and a homely atmosphere with a book exchange scheme. A cosy lunchtime haunt, with a selection of cakes influenced from the Austrian owner's homeland. 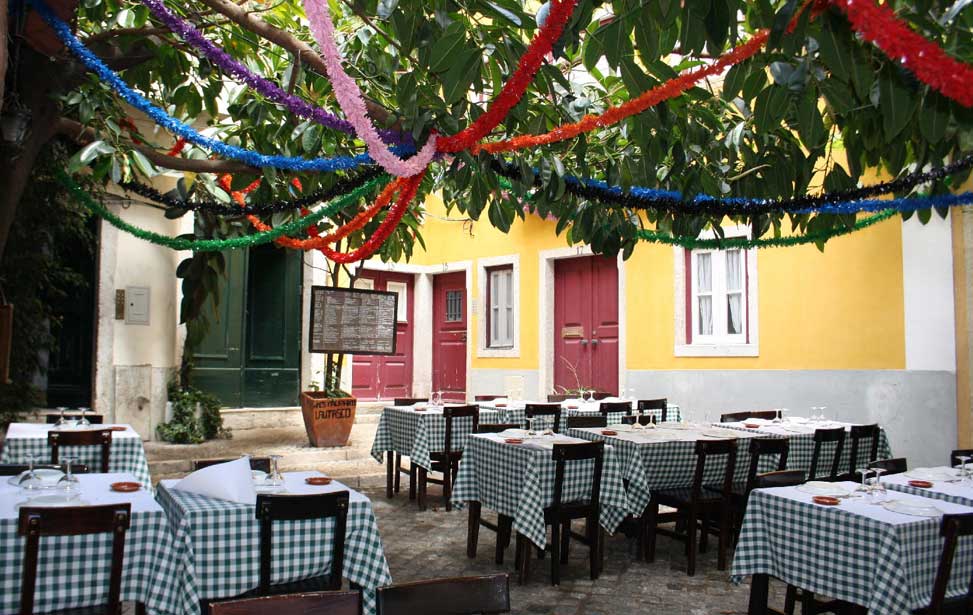 A reasonably priced atmospheric restaurant offers a selection of national specialities. Situated in a romantic courtyard canopied by leafy vines and lanterns. On certain nights there is a Fado show.