Twenty kilometres (12.5 miles) north of Portalegre on the northwest slope of the Serra de São Mameda mountain and nature park is the picturesque Spa Town of Castelo de Vide, which seems frozen in time. It's been described by many as the best-preserved medieval town in Portugal. It retains a carefree lethargic charm. That said, tourism to the village is still low and at comfortable levels, albeit a few Spanish visitors zipping over the border in search of handicrafts. 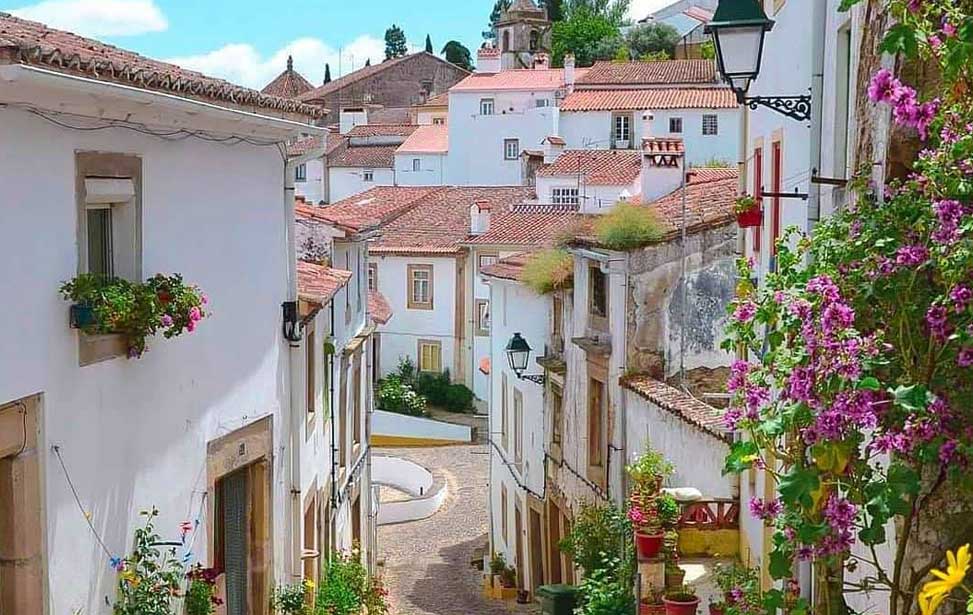 It's not known exactly when the first defensive ramparts surrounding the old town were constructed. The Castle dates from the 13th century during the reign of Afonso IV. A commemorative stone hangs above the main entrance. Additional defensive walls were built in the early 18th century to protect those urban areas that had overspilled the original fortifications. Today these defences still carry the scars of past conflicts done by cannonballs, ballista shots and musket fire.

One of the great pleasures of the medieval area within the walls is traversing the maze of narrow cobbled streets lined by age-old whitewashed houses with their characteristic chimneys and artistically worked gothic doorways and window surrounds. Flowers are popular, with just about every house adorned with window boxes and rows of flowerpots. Numerous small squares make ideal places to enjoy a café and soak up the ambience.

The present structure was completed during the reign of Afonso IV in 1327 AD under the order of his father King Dinis. It stands on the remains of a Moorish castle utilising quartzite and granite blocks. An ingenious ventilation system still survives from this time. Its massive keep has sustained a lot of damage over time. Firstly by an explosion in 1705 during the Spanish occupation, and then once again during the earthquake of 1755.

Successive attempts to repair the keep have occurred since, culminating with a complete rebuild in 1978. Now it's possible to climb to the top and experience the superb views over the town and surrounding countryside. Since 1910 the castle has been protected as a National Monument. Within the castle grounds stands the church of Nossa Senhora da Alegria, in which the interior walls are covered floor to ceiling with 17th-century azulejos.

The most medieval area within the old town is the Judiaria or the Jewish Quarter. It has been here since the 14th century after King Pedro I granted his doctor lands here. Being strategically placed close to the Castle the Jewish Quarter became a thriving commercial area and a social hub, Jewish surnames traced back here suggest trades such as tailors, cobblers and weavers. During the inquisition and the Edict of Expulsion of Jews from Spain, the Portuguese Kings contributed to the enlargement of the Jewish Quarter to harbour refugees. Star of David symbols painted on footpaths guide you to the Judiaria on the eastern side of town and the name of several streets bears witness to Castelo de Vide's Jewish heritage.

Situated on the corner of Rua da Judiaria and Rua da Fonte, with an east-west orientation, this 13th Century synagogue is believed to be Portugal's oldest. The Hebrew name of the Synagogue is Beit-Ha-Midrasch-Sefardin and is now open to the public as a museum. The internal space is one hall divided into two floors. By the entrance to the first floor, there is a little opening containing a Mezuzah parchment. This document contains some words from the Shema, the most important prayer of the Jewish religion. In the hall there is a tabernacle with holes for lamps filled with Sacred Oil, at the right side is support for Holy Scripture with seven balls on the plinth, representing the six days God created the Earth and the Sabeth. 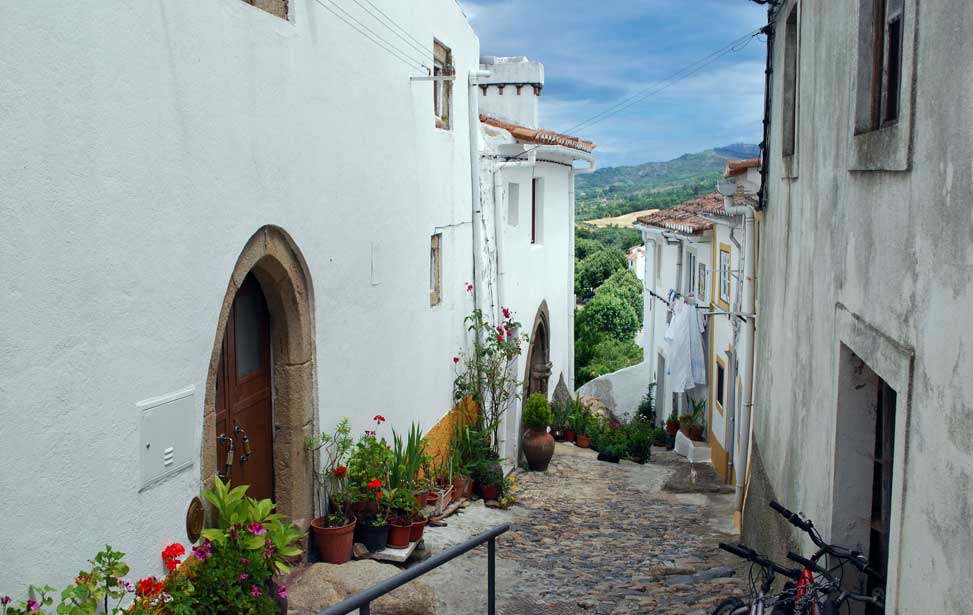 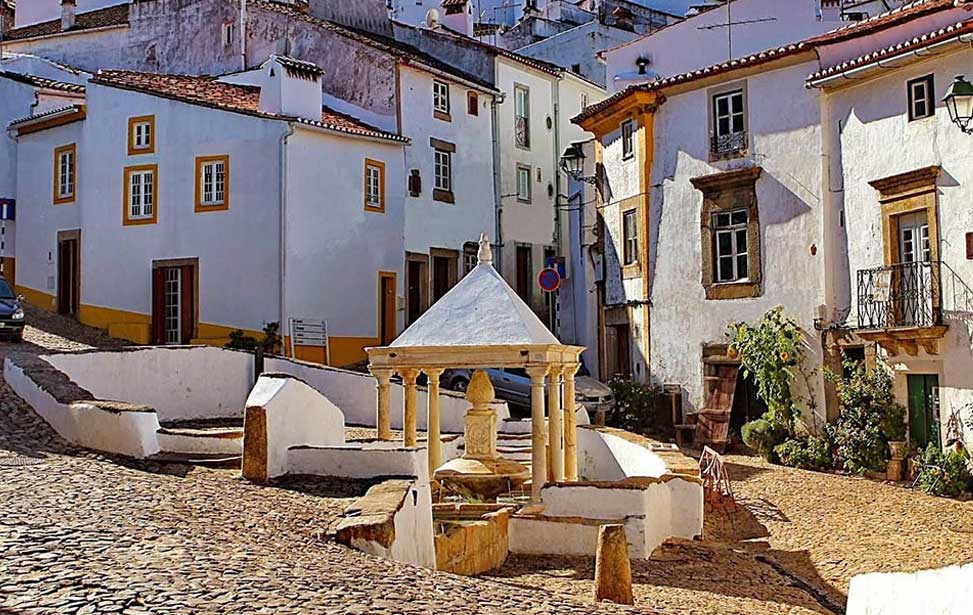 Located close to the Synagogue in Largo Dr. Frederico Laranjo is this curious 16th-century fountain with more ancient origins. It consists of a rectangular basin that is composed of vertical granite stones. Six marble columns support a pyramidal roof topped with a pine cone. Within this structure is a disc-shaped body with four symmetric taps. Mounted on this is a stone plate decorated with the coats of arms of Portugal and Castelo de Vide with figures of two children. This ensemble is also topped with an acanthus flower or a tulip. Next to it is another rectangular basin that served as a trough for donkeys, mules and horses. The fountain is a focal point with this old square which itself is worth much attention. In 1953 it was classified as a national monument. The Romans favoured the towns spring water and it still can be drawn from this fountain today. | 39° 25' 01.7" N | 07° 27' 19.9" W 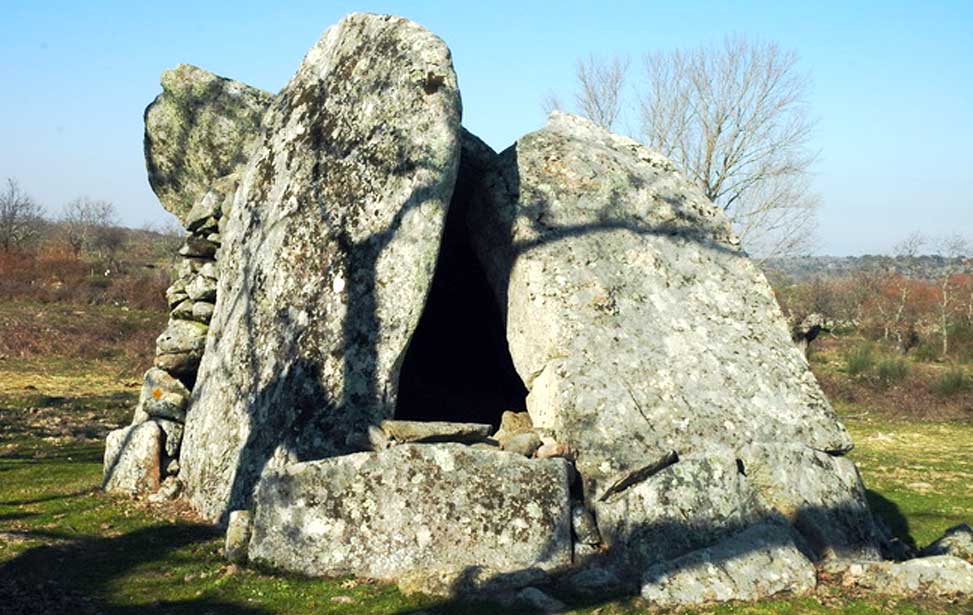 In this area on Rua Nova, there was a tradition of ironworking from craftsmen descended from Jewish families expelled from Spain in the 16th century. This tradition lasted right up to the second half of the 20th century, in fact, in the 1950s there were still five ironworks operating. Among them was the one belonging to the Tapadejo's family, from whom the museum acquired its name. Master Carolino Tapadejo applied his craft here between 1945 and 2001. The museum preserves Master Carolino's memory and those, who throughout the centuries dedicated their lives to working iron. His sons Carolino, Mateus and José Alberto set up a partnership with Junta de Freguesia de S. João Baptista (the local parish) to start a working museum. The family donated all the exhibits, some of which are over 500 years old.
39° 26' 38.6" N | 07° 28' 12.5" W. 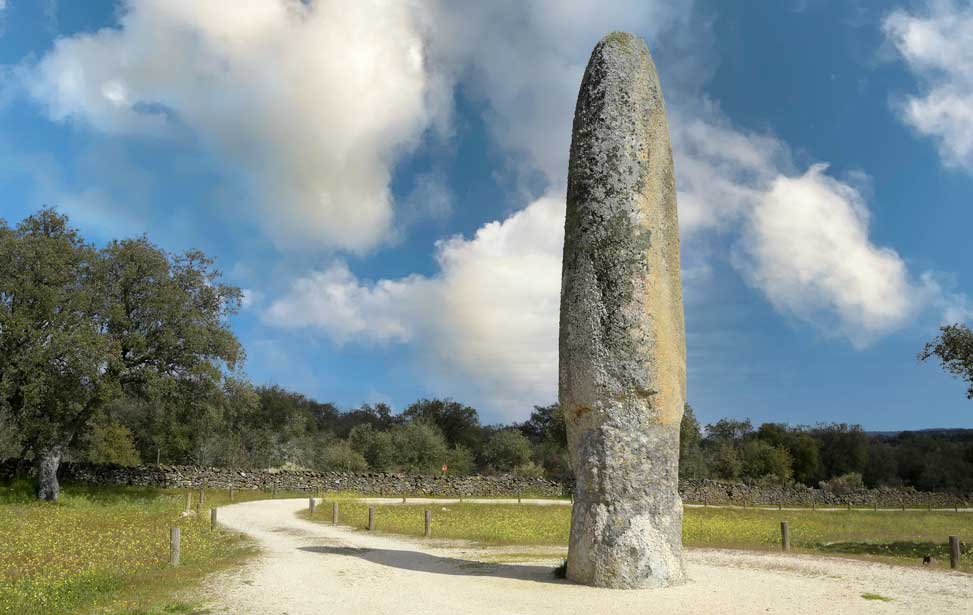 The Coureleiros Megalithic Park, also known as the Megalithic Necropolis of Coureleiros (Necrópole Megalítica dos Coureleiros Anta dos Coureleiros) contains a series of four Burial Chambers or Dolmens, found along a well-signed footpath just under a mile apart. They were built between the 4th and 3rd millenniums BC in the middle Neo-Chalcolithic era in an east-west configuration and are in various stages of preservation. The four Antas (Burial Chambers) have had Public Interest status since 1997 and Anta 2 was classified as National Monument in 1910. 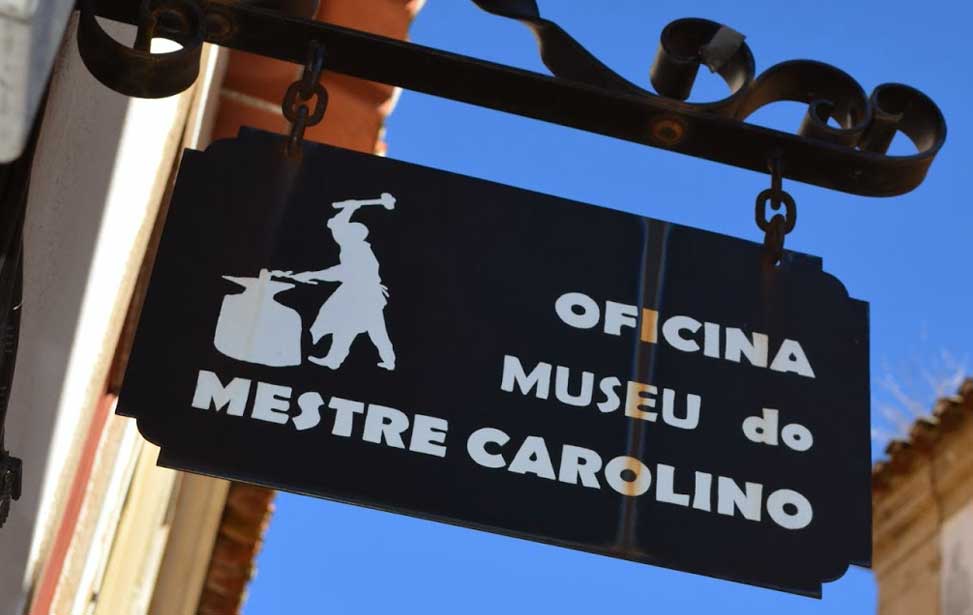 In this area on Rua Nova, there was a tradition of ironworking from craftsmen descended from Jewish families expelled from Spain in the 16th century. This tradition lasted right up to the second half of the 20th century, in fact, in the 1950s there were still five ironworks operating. Among them was the one belonging to the Tapadejo's family, from whom the museum acquired its name. Master Carolino Tapadejo applied his craft here between 1945 and 2001. The museum preserves Master Carolino's memory and those, who throughout the centuries dedicated their lives to working iron. His sons Carolino, Mateus and José Alberto set up a partnership with Junta de Freguesia de S. João Baptista (the local parish) to start a working museum. The family donated all the exhibits, some of which are over 500 years old.
High Season: Daily: 09h00 - 12h00/13h00 - 17h00 | Low Season: Daily: 09h00 - 12h00/13h00 - 16h00

The main building on the Praça D. Pedro V is the impressive Igreja de Santa Maria da Devesa church, whose south-facing facade overlooks the square. Its construction began in 1789 on the remains of a 14th-century shrine. The main portal, approached via a staircase, is in the centre of the facade. Its lintel is formed from granite decorated in the Baroque style. It is topped with a depressed arch, crowned with an angel's head with open wings, upon a small cornice. Framing each side of the portal are two granite bell towers with fluted shafts as long as the lintel, where the columns end with Corinthian capitals. Above the cornice is a door with an iron balustrade.

The nave is rectangular and divided into four areas, separated by painted pilasters. The ceiling is a barrel vault on the top of the cornice extending the nave and the transept, also divided by transverse arches. There is an arched niche in the centre of the altar with an effigy of Jesus. The church is home to the Museum of Religious Art Cónego Albano Vaz Pinto.
Monday - Friday: 09h00 – 18h00, Saturday: 09h00 - 13h00, Sunday: CLOSED | FREE
Igreja Matriz de Santa Maria da Devesa, 7320, Castelo de Vide, Portugal.
39° 24' 52.6" N | 07° 27' 14.6" W 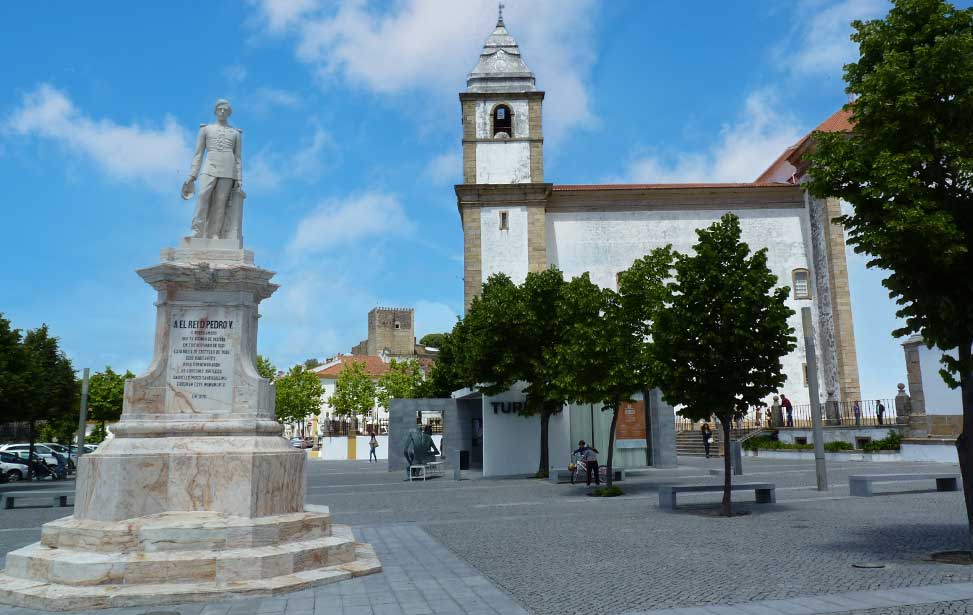 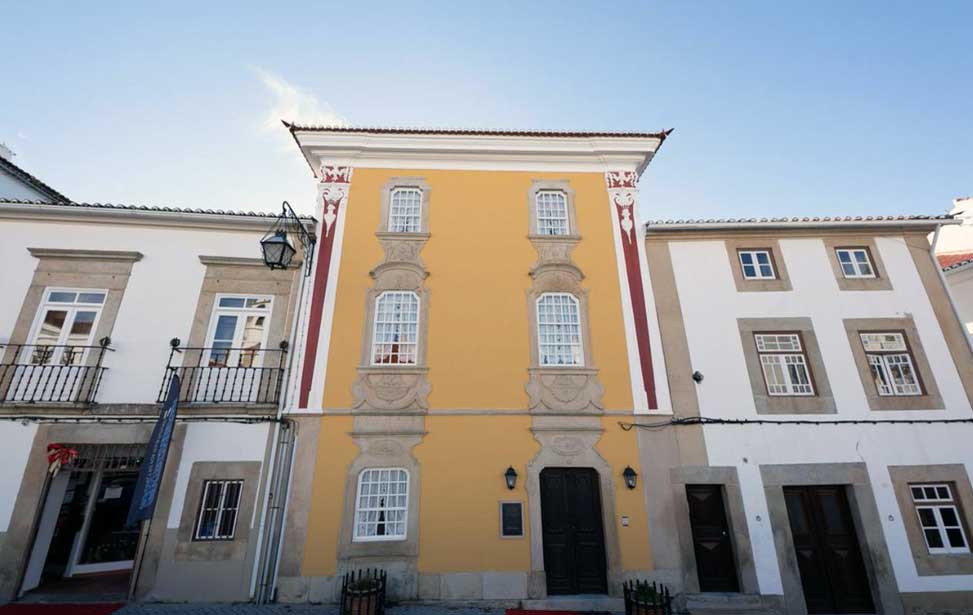 Centrally located on the Praça de Dom Pedro V square opposite the Igreja de Santa Maria da Devesa church and tourist office. It's bright yellow façade is unmissable, hence its name. The hotel itself is a tastefully renovated 17th-century townhouse with plenty of original features, adding charm yet with modern facilities. Although this small hotel only has eight double rooms and two suites, it never feels crowded. The staff will always pay you much attention. Friendly, homely, clean and comfortable.
Praça D. Pedro V 11, 7320 – 111, Castelo de Vide, Portugal.
39º 24" 54.2' N | 07º 27" 21.2' W 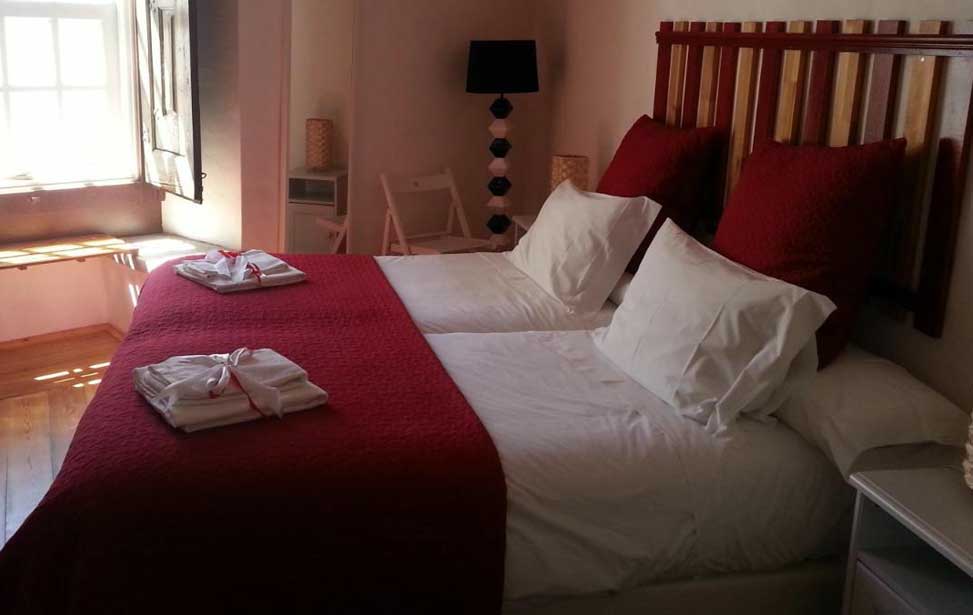 Well situated a short distance from the old town centre, these self-contained apartments are of ample size, tastefully decorated and comfortable. Featuring free WiFi throughout. Rooms include a flat-screen TV. The kitchenettes are fitted out with a fridge, microwave, electric hob, coffee machine, kettle and sink. Some rooms have a seating area for your convenience. Every room is fitted with a private bathroom and a shower. For your comfort, you will find free toiletries and a hairdryer. There is also a cash machine at the property. 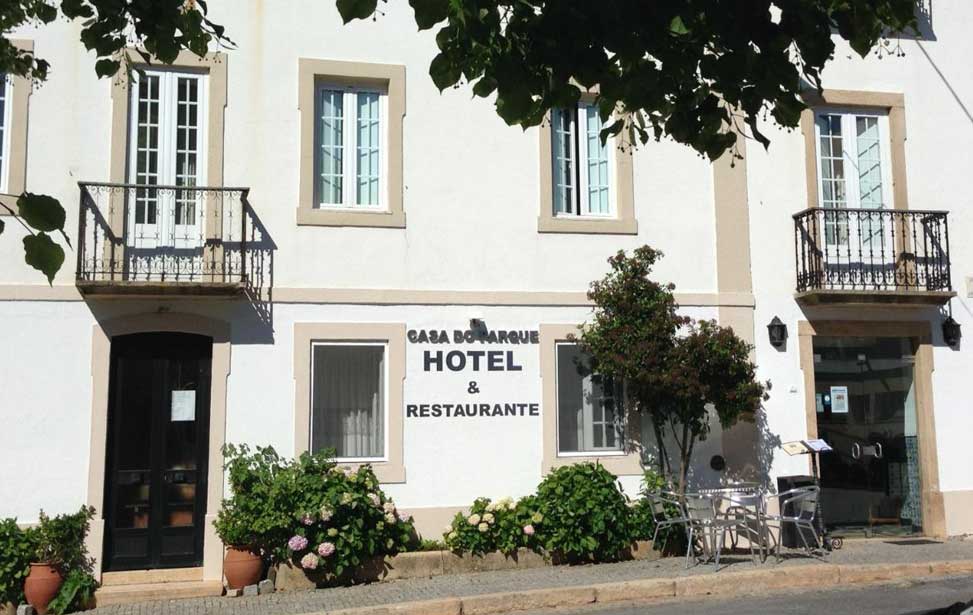 Hotel Casa do Parque boasts a restaurant, bar and free WiFi. Guests can enjoy the on-site restaurant. All rooms are equipped with a TV. Every room comes with a private bathroom. 100m from the town centre and five minutes walking to the castle. 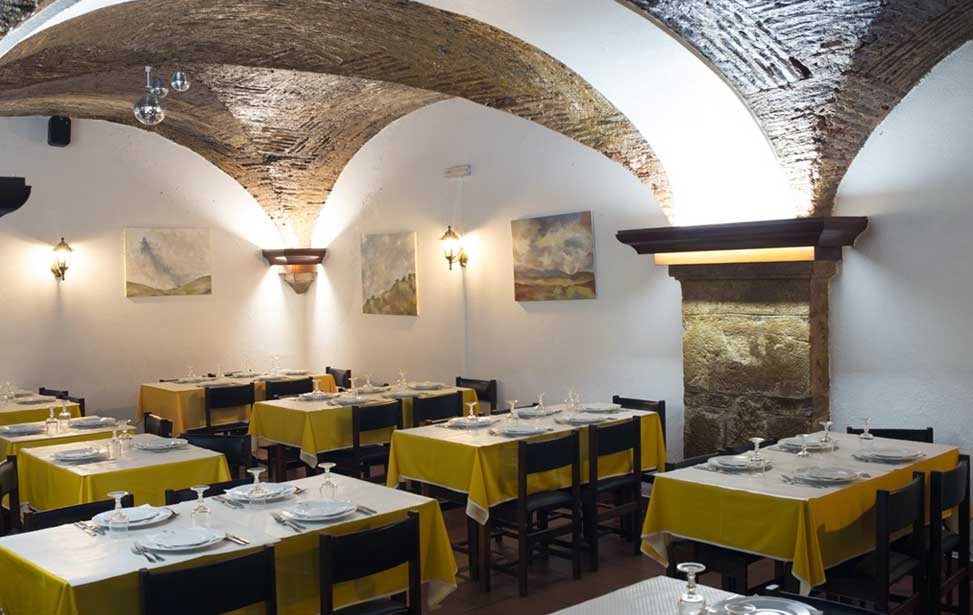 TAn unpretentious bar/restaurant with the dinning area downstairs under a vaulted ceiling. The service is typically warm and friendly and portions generous. On the menu are local delicacies as well as Portuguese classics, at modest prices. 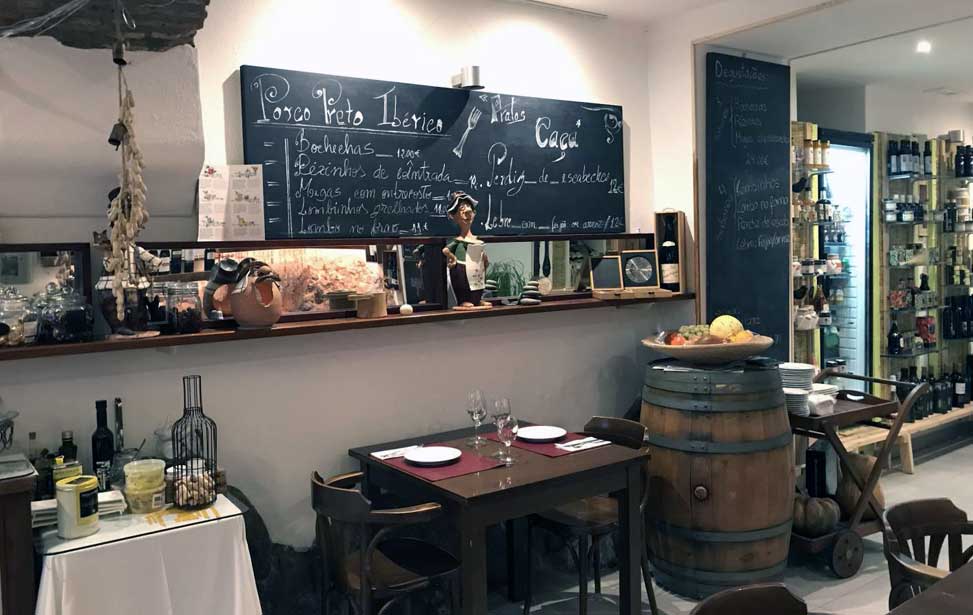 Any time searching for this restaurant is well rewarded. Tucked away in a side street, this local gem first treats your eyes with its interesting decor. The walls are covered with wine bottles and cartoons making fun of the names of Portuguese dishes. The attentive waiting staff will talk you through the dishes on offer. You can order four small "sample" dishes or a full-sized meal. The choice of food changes with the season and dependent on what is available locally. Don't expect to see a printed menu. An altogether different dining experience, dishes are made to your preference. Prices reflect the high quality of food and service. 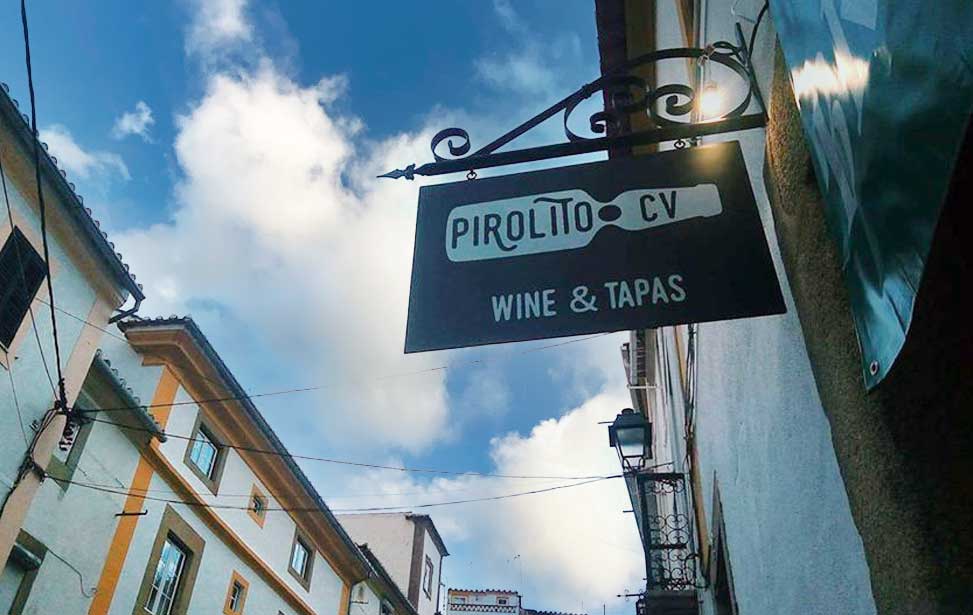 This friendly and unpretentious family-run establishment offers a range of great local petiscos (tapas) at reasonable prices. It's popularity with locals should be seen as a recommendation rather than a hindrance. There's also a great selection of artisan ales and local Alentejo wines available.