SOUTH OF THE RIVER TEJO

As recently as the mid 20th century the South of the river Tejo was under populated and somewhat cut off, reach only by ferry from Lisbon. The "Salazar Bridge" suspension bridge was built in 1966 (renamed the Ponte 25 de Abril after the 1974 Revolution) and opened up bridge opened up the South bank to the growing city, giving access to the Costa da Caparica beyond. If you take the ferry across you're likely to disembark ar Cacilhas, famous for it's seafood restaurants and sunset views.

Further down the peninsular is the fine seaside resort of Sesimbra, the city of Setúbal, Palmela and its medieval castle, the River Sado, Tróia and the beautiful Parque Natural da Arrábida. Our sister website MADABOUTLISBON.COM will guide you there and introduce you to the best places to see and top things to do. | www.madaboutlisbon.com 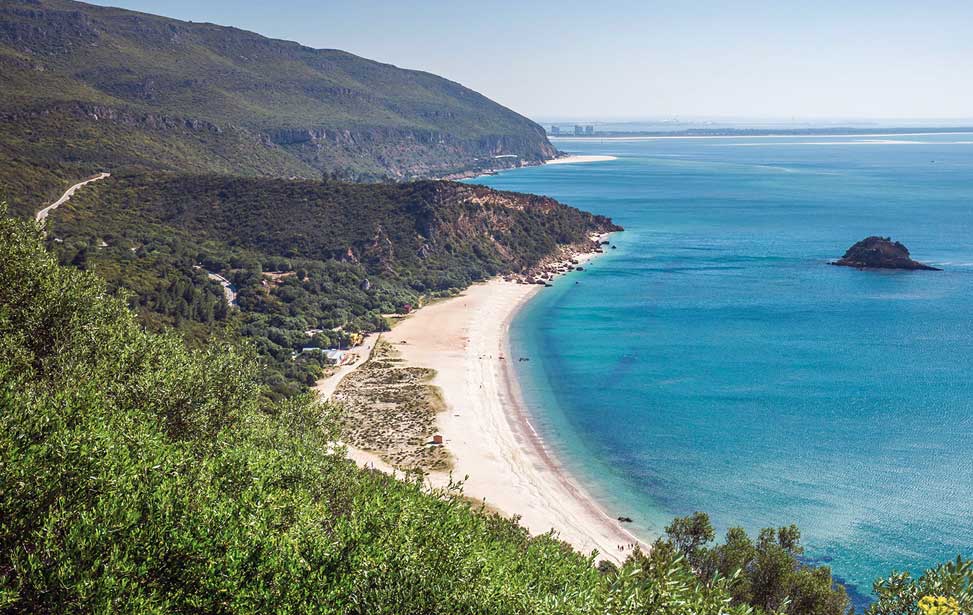 The beautiful coastline of the Arrabida nature park known as the Costa Azul. 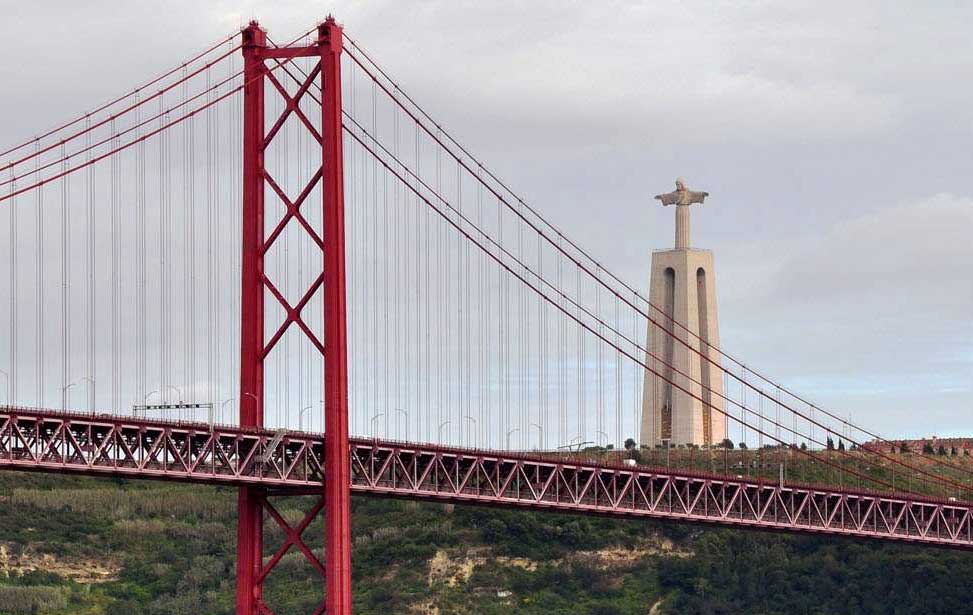 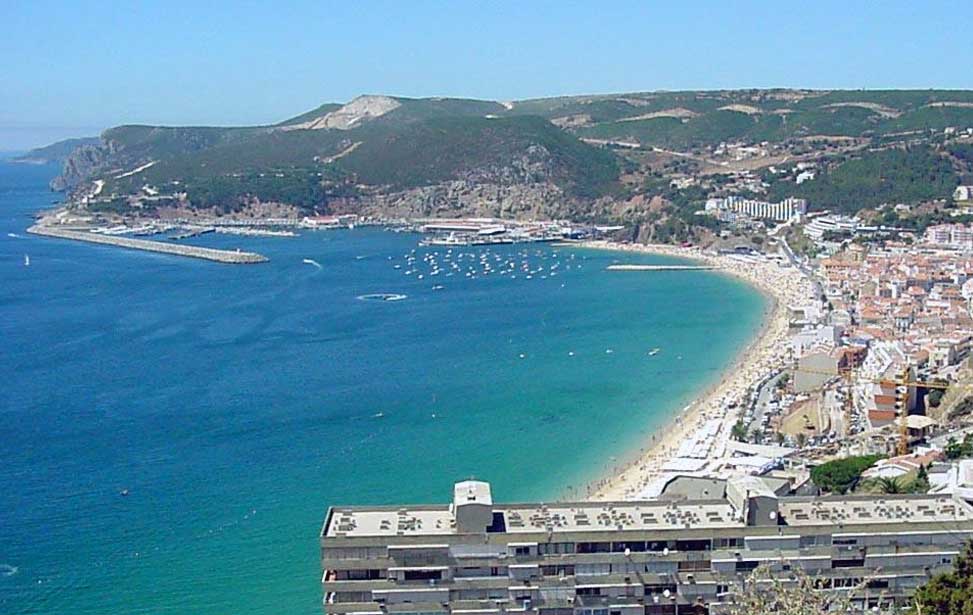 A lively yet small beach resort that is Sesimbra. 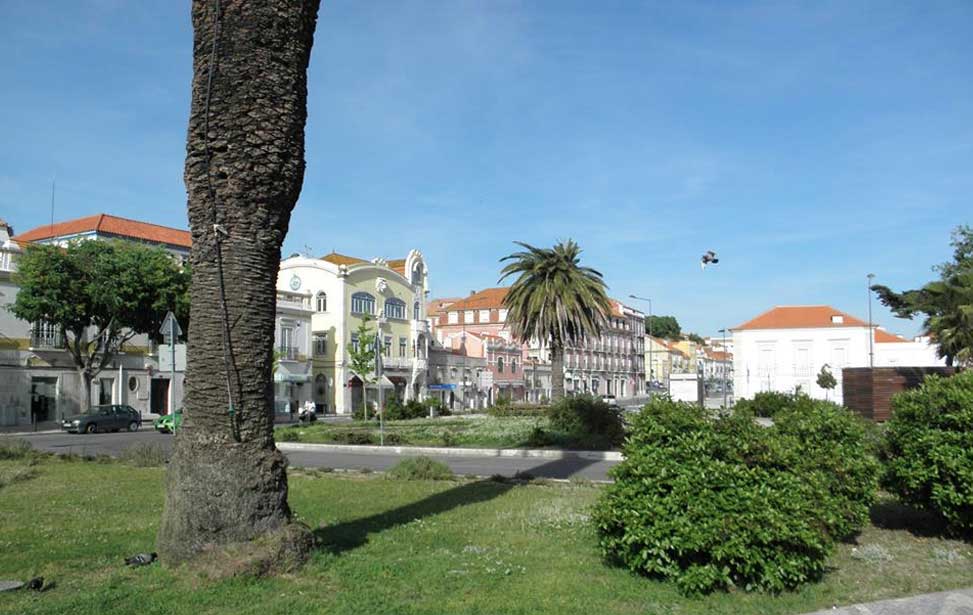 The ideal base camp for exploring the surrounding areas and the Costa Azul.

THE FERRY ACROSS THE TEJO 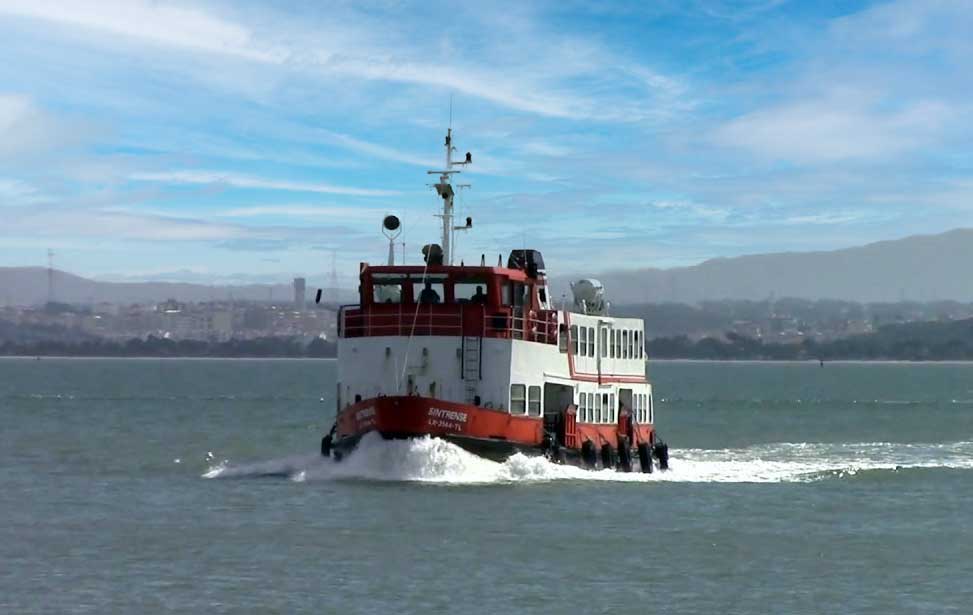 The most adventurous way to cross the mighty Tejo (Tagus) river is by ferry. It leaves the Cais do Sodré Ferry Terminal in Lisbon, ideally located on the green metro line and terminates at Cacilhas. The ferries are regular. The crossing takes about 15 minutes. These white and orange boats are known as Cacilheiros locally.

You may wish to spend lunchtime or an evening at Cacilhas. Take advantage of some of the best fresh fish and seafood restaurants in the region. These restaurants have a huge array of dishes on offer, which will go well with a refreshing pint any time of the day. The cafés and restaurants are located alongside the promenade. Here there are amazing views over the river to Lisbon. The variety of dishes available here is extraordinary, however the dish that stands out is Cataplana, a stew cooked in a copper vessel of the same name.

On the water's edge is the former Lisnave Shipyard and is now a permanent home for the Fragata D. Fernando II e Glória wooden-hulled, 50 gun frigate. It was Portugal's last sailing warship, a lasting legacy of Portugal's maritime history. Built in India, it traversed the oceans between Portugal's Indian colonies and Lisbon, with a crew of 400. Sadly in 1963 it caught fire and lingered unattended until 1993. It was restored to its 19th-century glory in time for the World Expo in 1998. Today, the fully restored ship is a museum and sits in a quay at Cacilhas docks, just a few steps away from the ferry station. The ships neighbour in the dock is the Barracuda submarine. Both vessels are open to the public as part of the Almada Naval Museum. 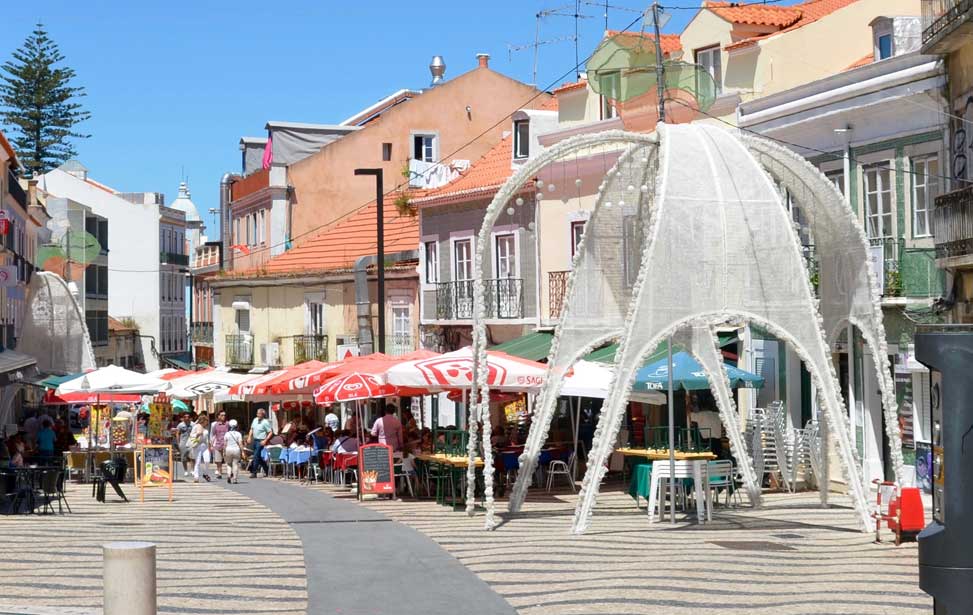 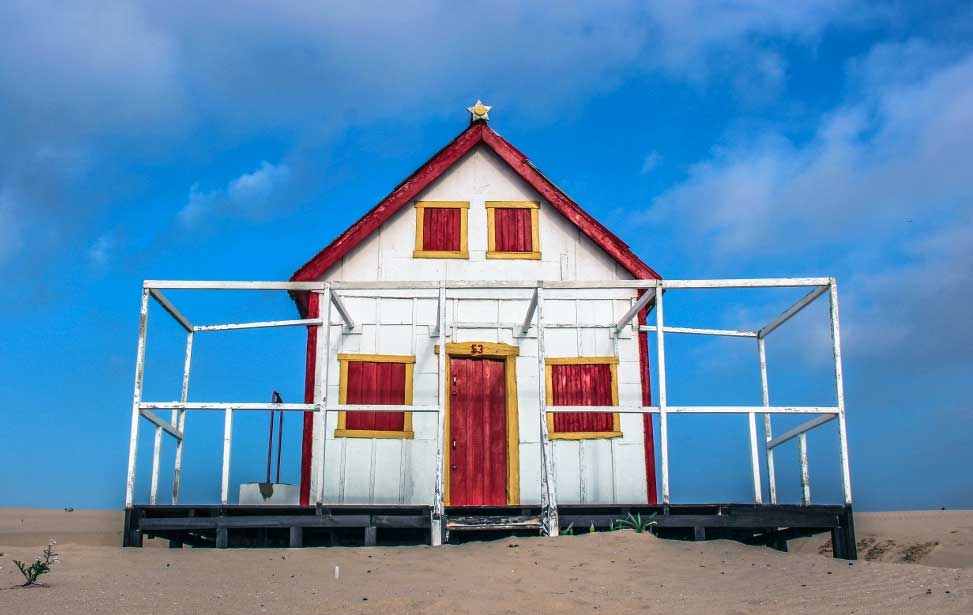 Extending down the west coast South of the River Tejo is the 15 mile stretch of stunning beaches collectively known as the Costa da Caparica. A major draw for locals and their families, it is relatively unknown by foreigners. The majority of the beaches here are family-friendly and are especially busy during school holidays. However, be aware the Praia do Meco at the southern end of the Costa da Caparica beyond the Lagoa de Albufeira is a nudist beach. Also down the southern end is the Arriba Fóssil da Costa nature reserve, where the pristine beaches, along with rare fauna, are protected by law.

It is the northern end that is most built-up. The plethora of beach bars make for a lively night out. That said, the age-old fishing traditions continue here. The daily catch is hauled onto the beaches in colourful traditional small boats and sold directly to the public and local restaurants. The mini-train runs six miles from Costa de Caparica town through less accessible beaches to the small village of Fonte da Telha during the high season. Water sports here are also popular. The waves here offer good conditions for beginner surfers. Regular buses run central Lisbon, starting from Praca do Areeiro (on the Green Metro line) to Costa da Caparica everyday
Timetable | See More [ ► ] 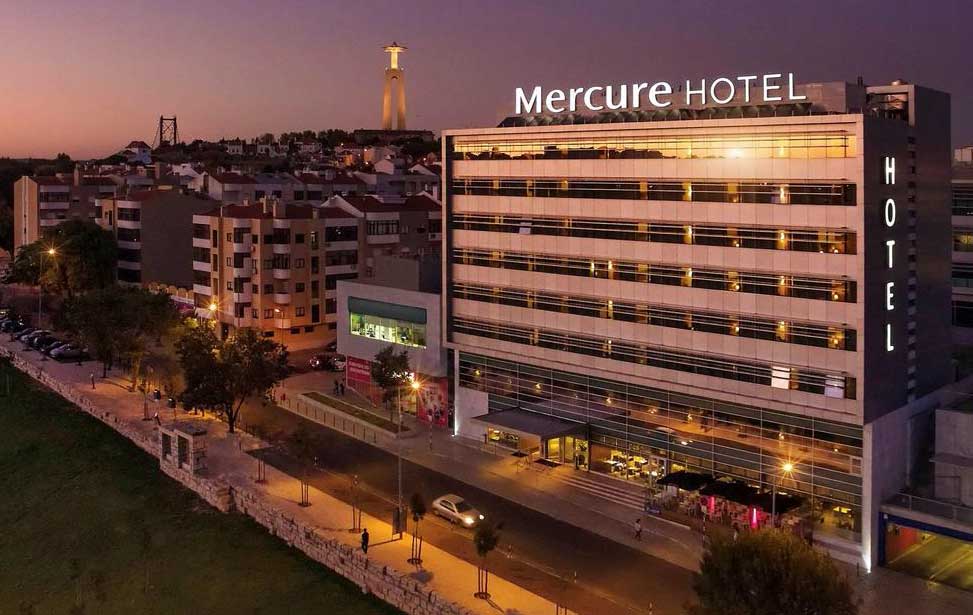 The 4-star Mercure Lisboa Almada is situated a short drive from Costa da Caparica's beaches and 0.9 miles from the iconic Cristo Rei Statue. It offers modern rooms with a picturesque view of Almada. The tastefully decorated rooms at the Mercure Lisboa Almada have cable TV, a work desk and air conditioning.

Free WiFi is available throughout the hotel. Free indoor parking is available for the hotel's guests. The hotel was inaugurated in 2010 and was the 1st four-star hotel in Almada. The hotel offers a restaurant serving international dishes inspired by Portuguese gastronomy. A new lounge concept has a variety of freshly prepared juices, teas and flavoured waters. Also available are refreshing mocktails and other non-alcoholic drinks. 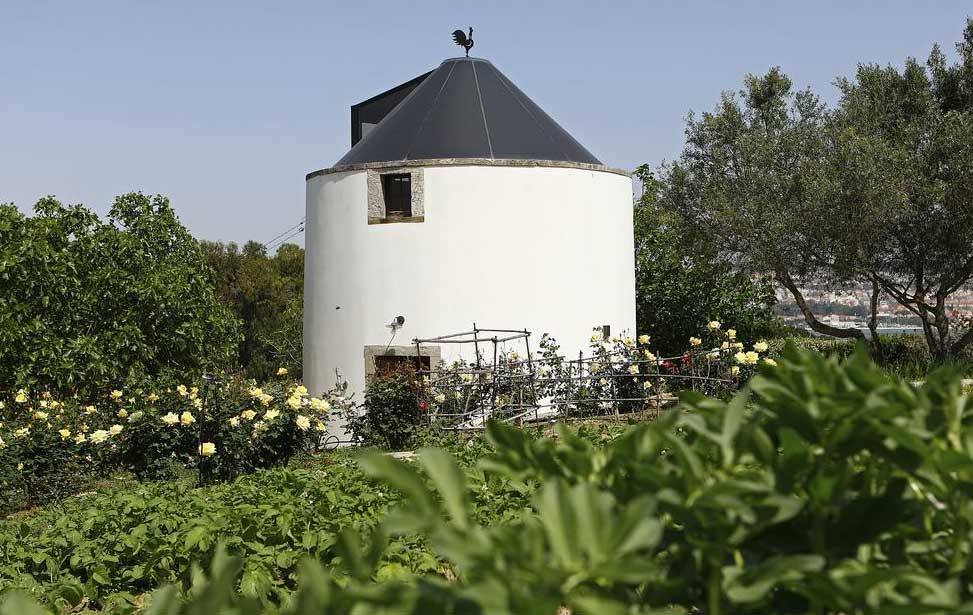 Olá Belém offers something different and unique. Spectacular accommodation in a renovated windmill complete with stunning views of Lisbon across the river in Caparica. Guests benefit from complimentary WiFi and private parking. The bed and breakfast has a patio and river views with one bedroom, a living room, a flat-screen TV, an equipped kitchenette with a fridge and a stovetop, and a bathroom with a shower. For added convenience, the property can provide towels and bed linen for an extra charge. Guests at the bed and breakfast can enjoy a continental breakfast. Guests can swim in the outdoor swimming pool, go cycling, or relax in the garden and use the barbecue facilities. 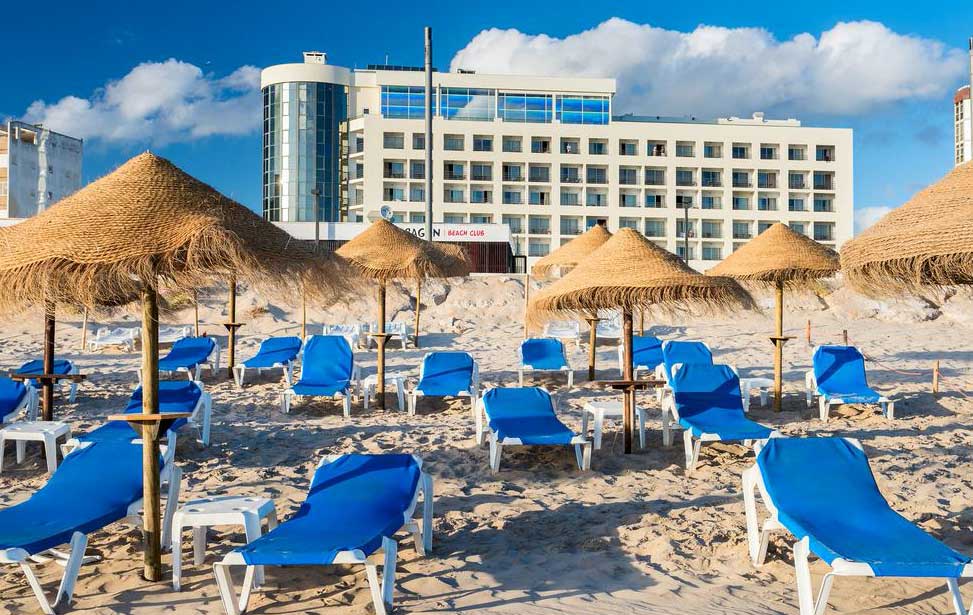 Overlooking the longest beach in the Lisbon area, this hotel provides far-reaching views of the Atlantic Ocean. Tryp Lisboa Caparica Mar features an outdoor pool and 354 rooms spread over seven floors. All guest bedrooms at Tryp Lisboa Caparica Mar feature a private balcony with mountain or ocean views. In addition, every room offers air conditioning, free WiFi, satellite TV, a hairdryer and an en suite bathroom. The two restaurants at the Tryp Lisboa Caparica Mar offer buffet meals and à la carte menus. An on-site bar is available throughout the year. During the summer season, guests can relax at the Lobby Garden Bar and the Red Dragon Beach Club. Aroeira Golf Course is 4.3 miles from the hotel, and there are other five golf courses within 24.9 miles. Bicycles can be rented on site. Guest are welcome to curl up with a book in the library. There are seven conference rooms equipped with the latest sound and image technology. 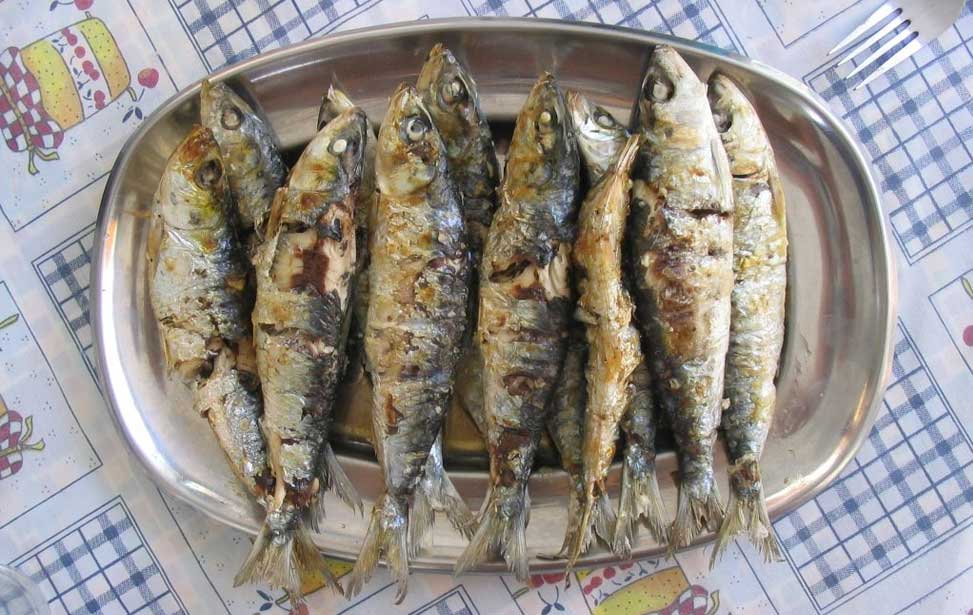 Renowned for its seafood, especially its sardines, this non-pretentious restaurant offers fine fare for a fair price. The staff are friendly and helpful. There's a good choice of wines available to help complete your dining experience. 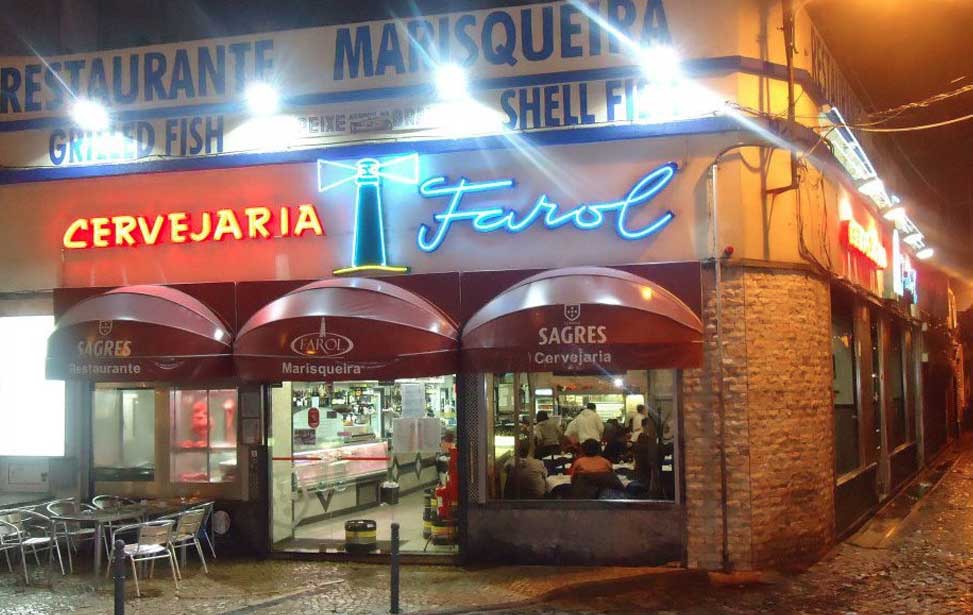 The "Farol" is a century-old restaurant that only serves fresh, locally sourced seasonal fish and chosen from their fish tanks. There's a wide choice of dishes on the menu to suit all budgets. The food is excellent, as is the service. Its popularity can cause it to be a little loud and busy, especially when tour groups arrive. The establishment is open two hours before the kitchen for serving their good choice of beer. 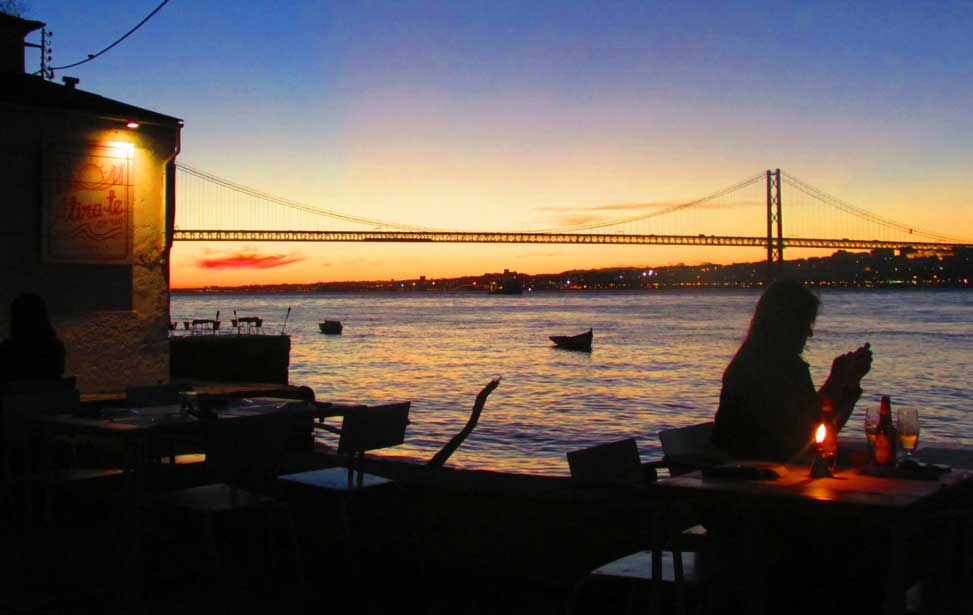 Sittin' in the mornin' sun, I'll be sittin' when the evenin' come.
Watching the ships roll in. And then I watch 'em roll away again…
Sittin' on the dock of the bay facing the Tagus River as it flows out to sea, this charming restaurant is a celebration of all that's is good which comes from the sea. Good food, good music, good service and a firm commitment to source only the freshest local ingredients.