When you arrive at the Parque das Nações from the centre of Lisbon you could be forgiven for thinking you've not only arrived at a different city, but also another century. An impression the parks architects would be proud of. The area is designed to impress, to demonstrate that Portugal is a modern and technological country. Paradoxically certain elements found within the architectural design of the buildings, parks and public art pay homage to Portugal's golden age. The site was built to host the Expo '98 World Exhibition. It involved redeveloping an old industrial and oil sodden land. The exhibition was held between May and September 1998, coinciding with the 500th anniversary of Vasco da Gama's arrival in India and the United Nations's "Year of the Oceans". It seemed fitting then the theme of Expo 98 was "The Oceans: A Heritage for the Future".

In the years since Expo'98 the site has been renamed Parque ads Nações (Park of the Nations), although some still cling on fondly to the name Expo, The district's ideal location by the river has seen it transformed into a place for exhibitions, shows, business, shopping, days and nights out. For affluent Lisboetas the area offers contemporary living and easy travel access to other parts of Portugal. The contrast of how the area looked before Expo'98 could not be more striking. During the early 20th century the area was rapidly transformed from an urban area to an industrial one. It was where transatlantic seaplanes re-fueled and also the location of the country's first oil refinery. The area fell into deterioration during the 1960s, becoming a progressively derelict industrial wasteland.

The idea started to emerge in 1989 to celebrate the 500th anniversary of Vasco da Gama's voyage to India and commemorate Portugal's voyages of discovery during the 15th and 16th centuries. When designing the broad concept for the Expo, it became very important from the outset to make the Lisbon World Exposition stand out compared to other events of the same type that had recently taken place.

The rather ambitious theme broadened from a local historical theme to a global one and incorporated the planet's oceans, their great diversity, and bringing the ecological role they play to the attention of the world. The ecological theme of the Expo complimented well with the rejuvenation of the wasteland it replaced. Celebrated as a great success, the world fair hosted 142 different nations and international organisations. It was the 100th such event since the Great Exhibition of Victorian London and was Europe's largest urban redevelopment at the time. Our sister website MADABOUTLISBON.COM will guide you there and introduce you to the best places to see and top things to do | www.madaboutlisbon.com 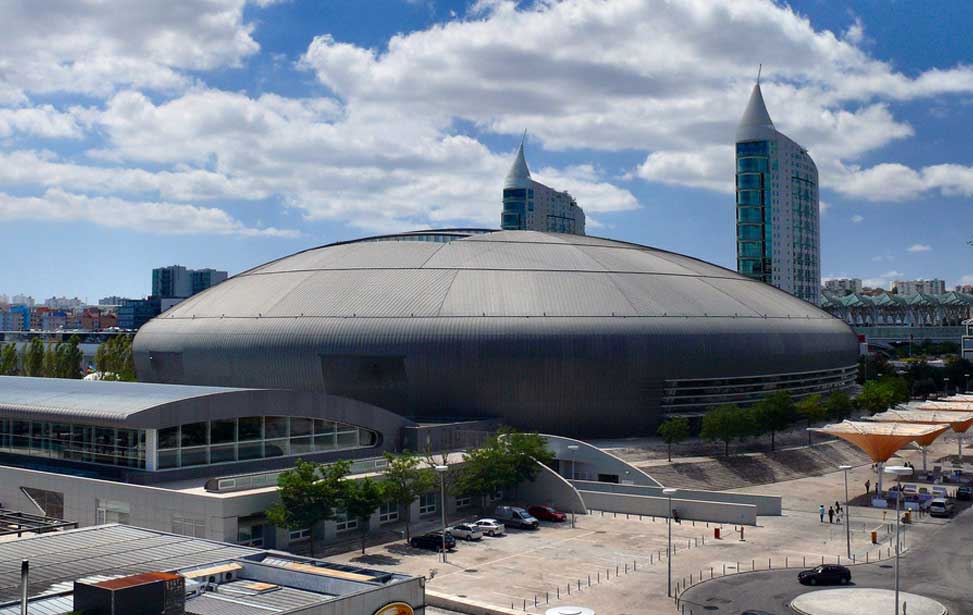 Fformerly Pavilhão Atlántico & MEO Arena. One of the largest in the EU. 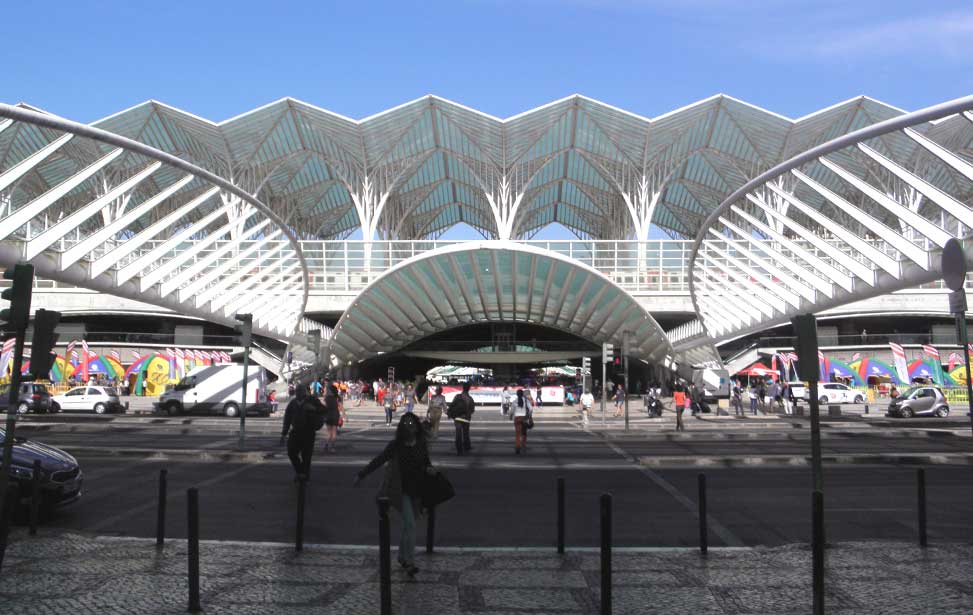 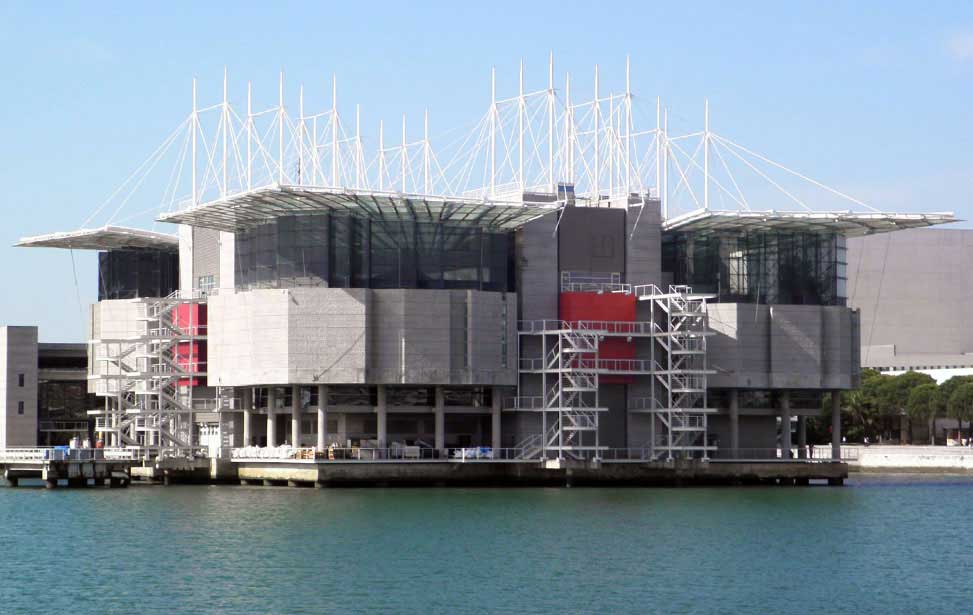 A great way for the whole family to spend the day at Europe's largest aquarium. 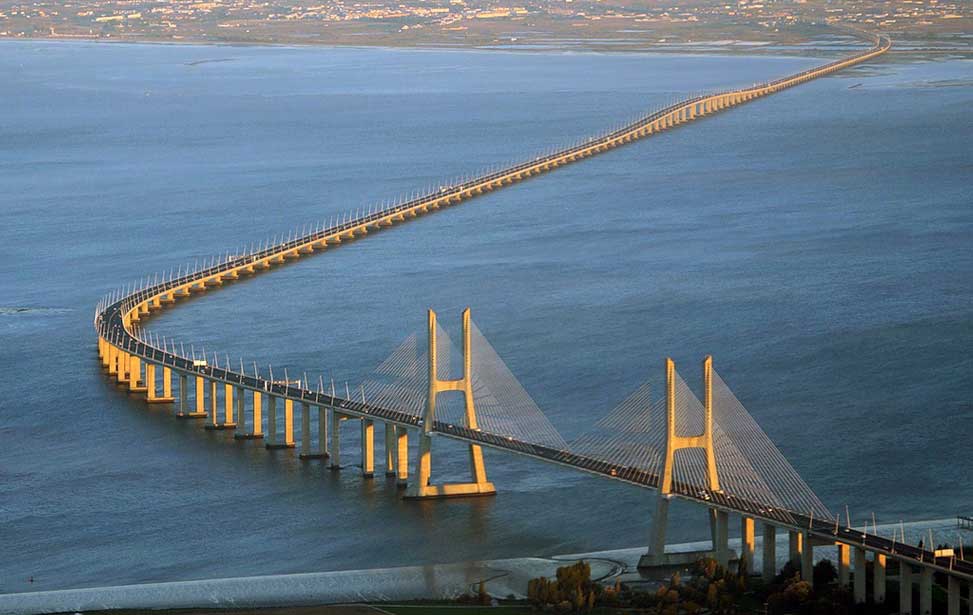 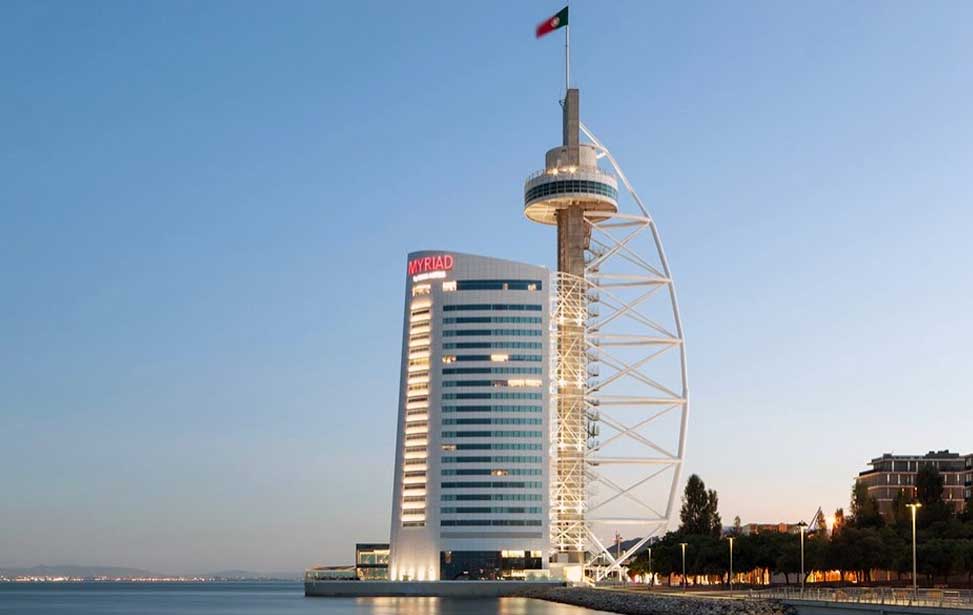 The 500th anniversary of Vasco da Gama's voyage to India was the inspiration of the architects Leonor Janeiro, Nicholas Jacobs and the architectural firm of Skidmore, Owings and Merrill. Its concrete central core representing a ship's mast and the curved lattice steel frame its sail, in the distinctive shape of a caravel, an early design of a trading ship used by the Portuguese. Onto the top of this mighty structure, the tallest in Portugal, where the crows nest would be is an observation deck and a panoramic restaurant which are accessible through three elevators. When the tower first opened for Expo'98 there was a four-story structure that represented the ship's bow which since has been demolished to make way for the new Myriad luxury hotel, the design of which completes the sail shape concept.

After various uses, this building is now part of the University of Lisbon (Universidade de Lisboa) but was originally constructed for Expo 98 as the home of Portugal's representation at the world fair. It was designed by the Portuguese architect Alvaro Siza Vieira. It is renowned for its large pre-stressed concrete roof which joins the two halves of the edifice. It weighs a staggering 400 tonnes and is an award-winning masterpiece of engineering. This design is based on the idea of a sheet of paper placed on two bricks. The university plan to use the building to host initiatives and events with education, scientific research and cultural theme. 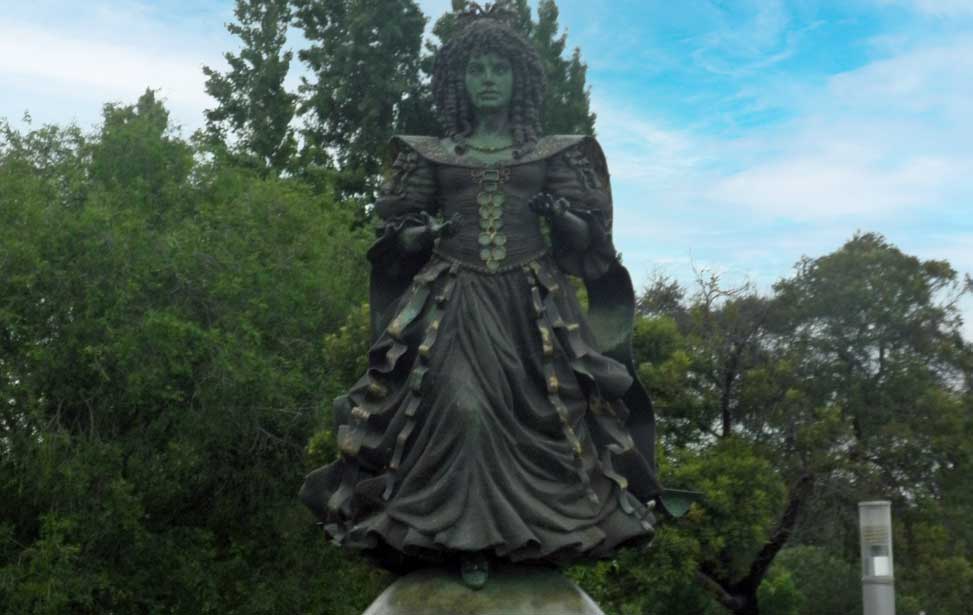 Some of the nicest legacies from the Expo'98 are the gardens, riverfront promenade, various sculptures and urban art. The beautiful landscaped themed gardens and promenade can be found for quite a distance along the riverside, gardens such as the Alameda dos Oceanos, Cabeço das Rolas, Esplanada D.Carlos I, Jardins Garcia d'Orta and Jardim de Água (Water Garden). The latter is latticed with streams, ponds water features and fountains.

Look out for the water volcanoes (although they remind me of giant walnut whips) that spout water from their tops and send waves of water cascading small canals. At the far end of the promenade is the 10-metre tall statue of Catherine of Braganza (as pictured) by the artist Audrey Flack. The spiky looking statue in front of the MEO Arena is called homem-sol by Jorge Vieira.

Characterised by its rare beauty it is an open port facing the Tagus estuary with a capacity of 600 berths. It receives vessels up to 25m in the south basin and cruises or mega-yachts up to 230m in the Ponte Cais. It is the focal centre for marine tourism in the park and the city of Lisbon. There are a handful of bars, restaurants and cafés for your refreshment. The nautical centre offers a range of water activities from river cruises, sailing to canoeing, windsurfing and paddle surf. There are various sailing courses for people of all ages and abilities. 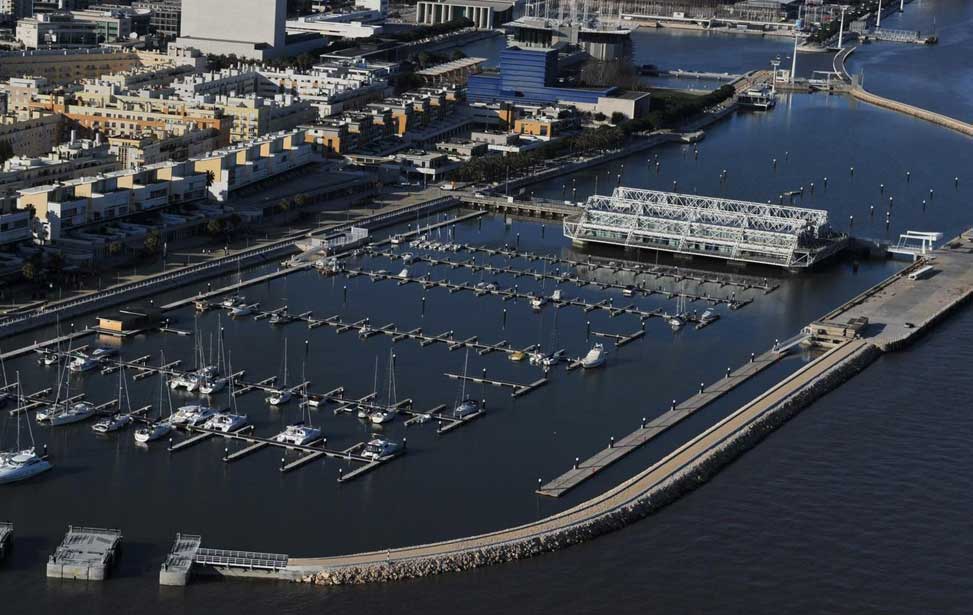 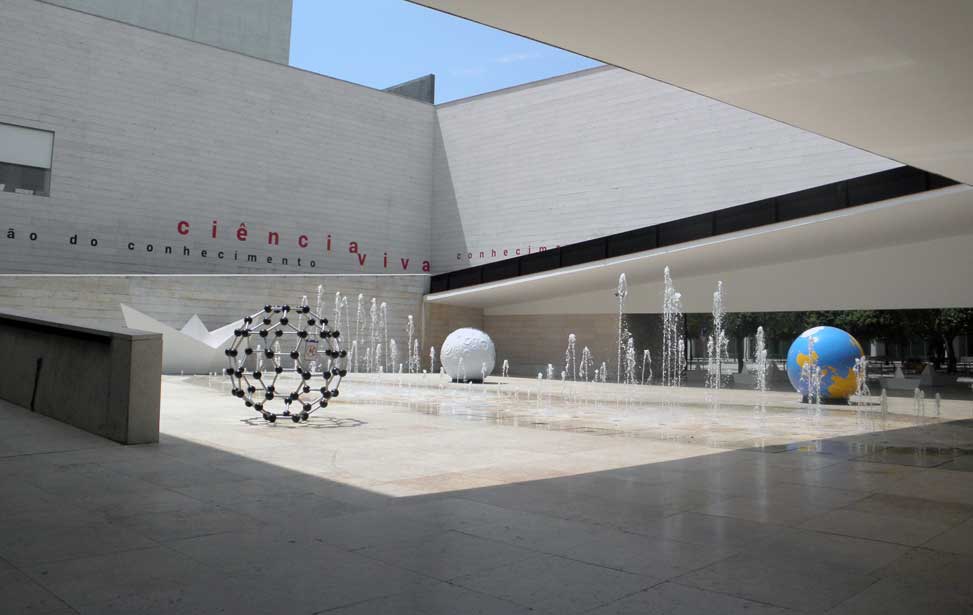 Within the Pavilion of Knowledge an interactive museum of science and technology presenting exhibitions and events in a family orientated and approachable way. There are many hands-on exhibits and experiments which engages the visitor with the topic matter. Permanent exhibits include flight simulators and holograms.
[ More About ► ] 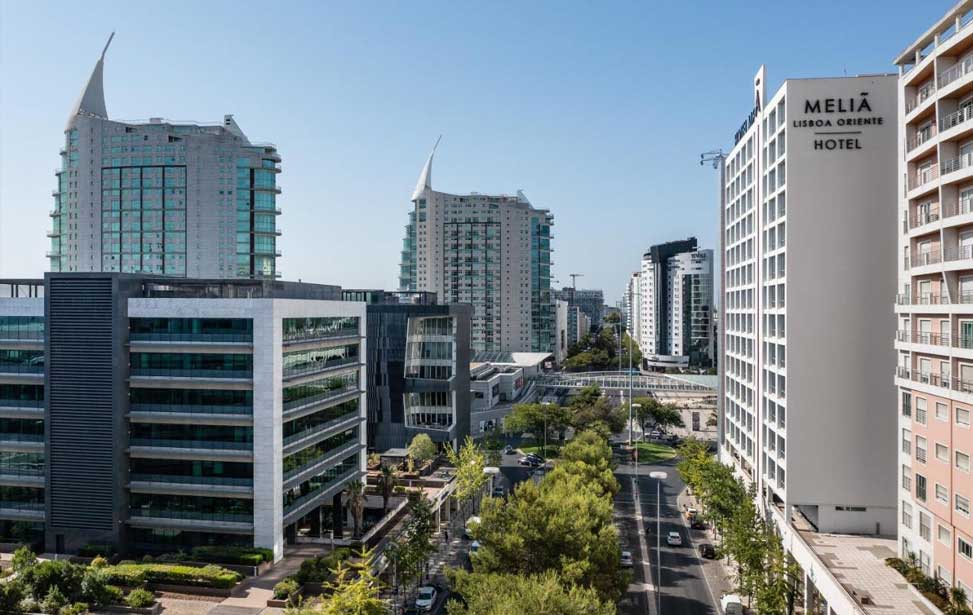 This renovated hotel in the heart of Lisbon’s Parque das Naçoes is surrounded by trendy restaurants. It offers free Wi-Fi, a brand new restaurant and renovated spacious rooms. Rooms at Melia Lisboa Oriente Hotel are bright and airy and have satellite TV, a seating area and a tea/coffee maker. They overlook the former EXPO 98 site and its many innovative buildings. Some rooms also look out over the water. The brand new restaurant serves international breakfasts and offers an à la carte service and a dish of the day, based on the Bistrô & Tapas concept. The famous Oceanarium and the Lisbon Casino are also close by. Lisbon city centre can be reached within 15 minutes using public transport. 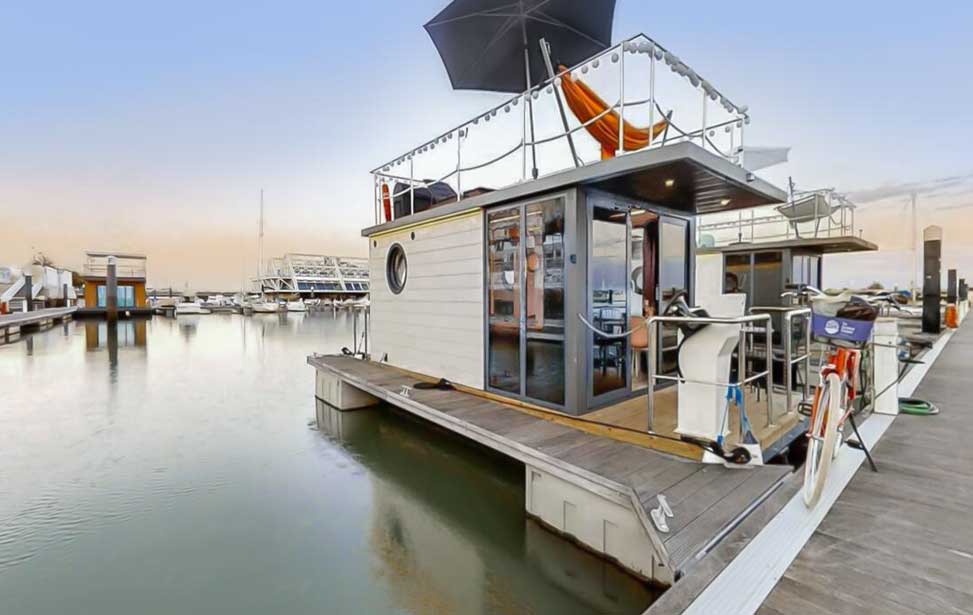 The Home boat Company Parque das Nações-Lisboa features accommodation with free private parking. The air-conditioned units are furnished with parquet floors and feature a private bathroom, a flat-screen TV, free WiFi, desk, a living room, an equipped kitchenette, patio and views over the river. There is seating and a dining area in all units. The boat offers a continental or gluten-free breakfast. The Homeboat Company Parque das Nações-Lisboa has a garden and sun terrace, which can be enjoyed by guests. 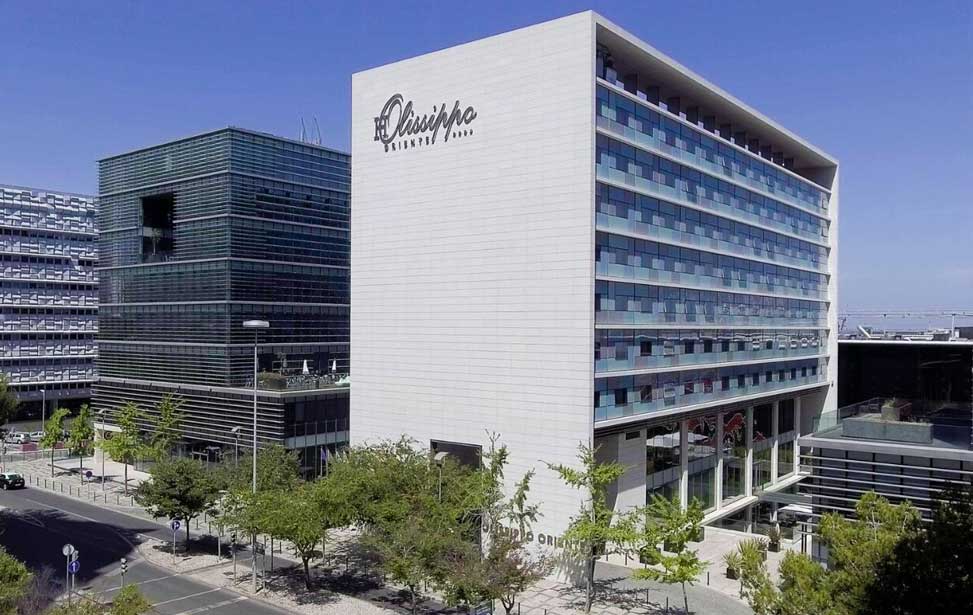 The Olissippo Oriente Hotel is a modern 4 star unit located at "Parque das Nações" in Lisbon. Stands out as one of its main features, the proximity to the Oceanarium, the Exhibition Centre (FIL), the Vasco da Gama Shopping Centre and the Lisbon Casino. 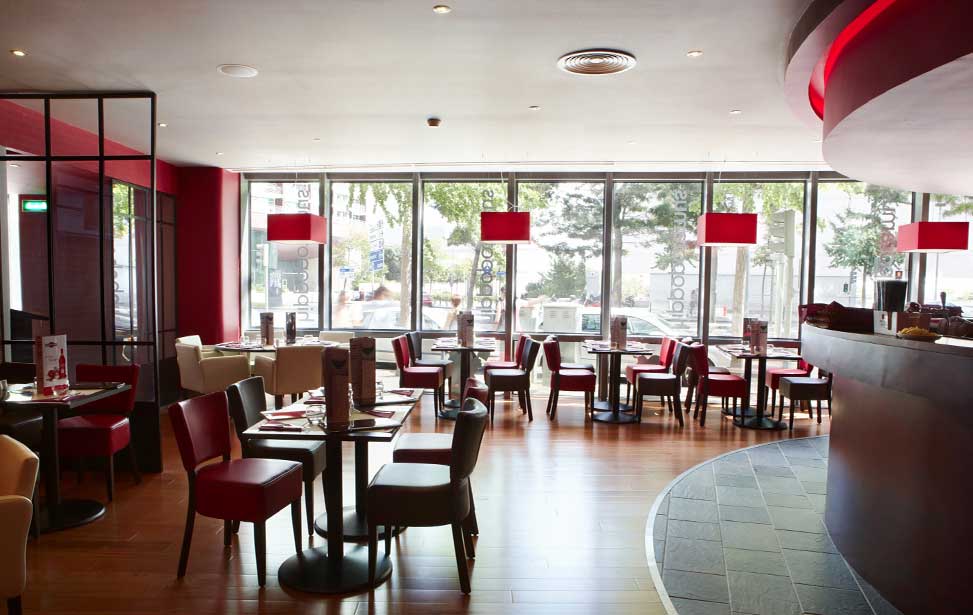 The Hippopotamus restaurant, the most recent development at the Tivoli Oriente in Lisbon, promises to surprise true fans of grilled meat. With relaxed decoration and a family atmosphere, this Lisbon restaurant is now the place to meet in Parque das Nações in Lisbon, for anyone looking to enjoy the best in grilled meat, done to perfection. The menu is varied with different meat and fish dishes, but without doubt, beef takes pride of place, which true devotees will appreciate. Located on the ground floor and with direct outside access, it is ideal for a quick lunch or a relaxing dinner with family or friends. 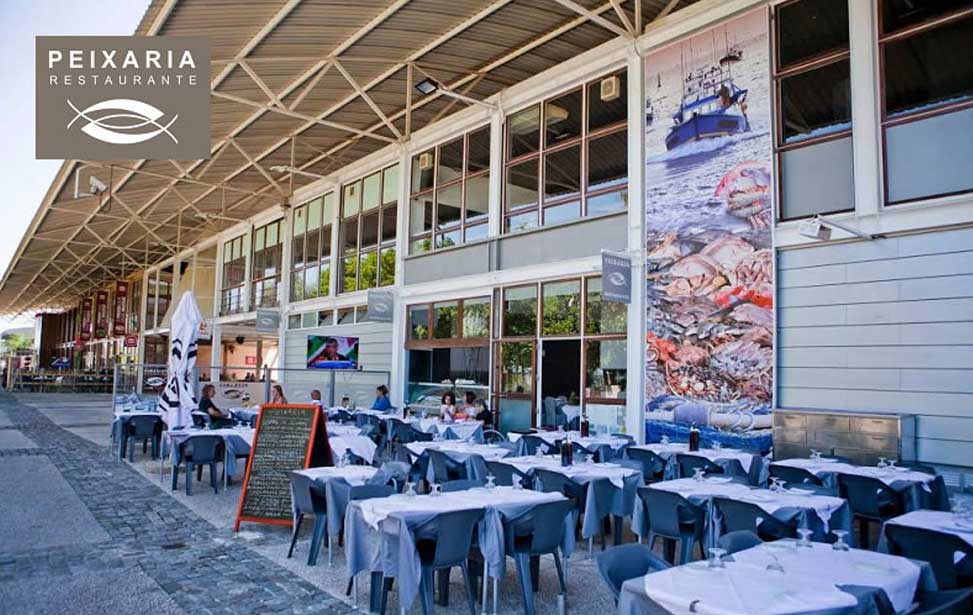 A Peixaria Restaurant opened recently, offering a wide range of top-quality fish, delivered daily from the best fishing ports. This great restaurant is located in the Expo Zone, a privileged location next to the River (Mar dal Palha) and at the bottom of the Torre Vasco Gama. The restaurant seats 350 diners, with three dining areas, overlooking the esplanade at the river's edge. 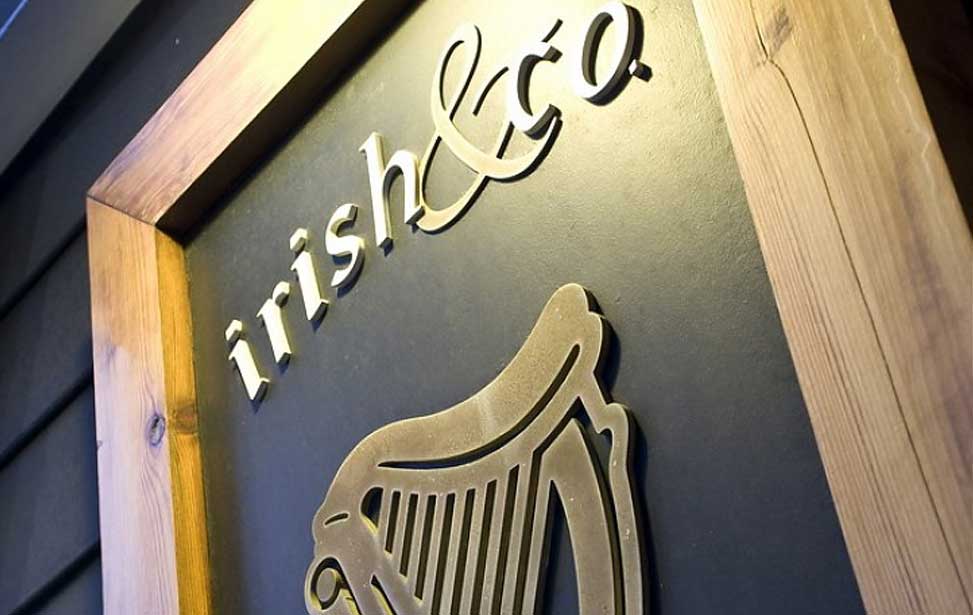 Irish and Portuguese people have a lot in common: good humour, joy, companionship and friendship at the table. Irish & Co. in Parque das Nações invites you to experience the Irish way and to make a toast to life.