On the northern slopes of the Serra do Buçaco mountain 25km (15.5 miles) north of Coimbra, lies the Parque Nacional do Buçaco (formally "Bussaco") famed for its scenic beauty and richness of vegetation. Within the three miles long perimeter, a network of footpaths takes you through 105ha/260 acres of the semi-cultivated park leading you past picturesque fountains, ponds, chapels, follies, and amazing vistas. Cars are allowed through the three entrances of Porta das Ameias, Porta da Serra or Porta da Rainha and all roads lead to the magnificent Palace Hotel do Buçaco. 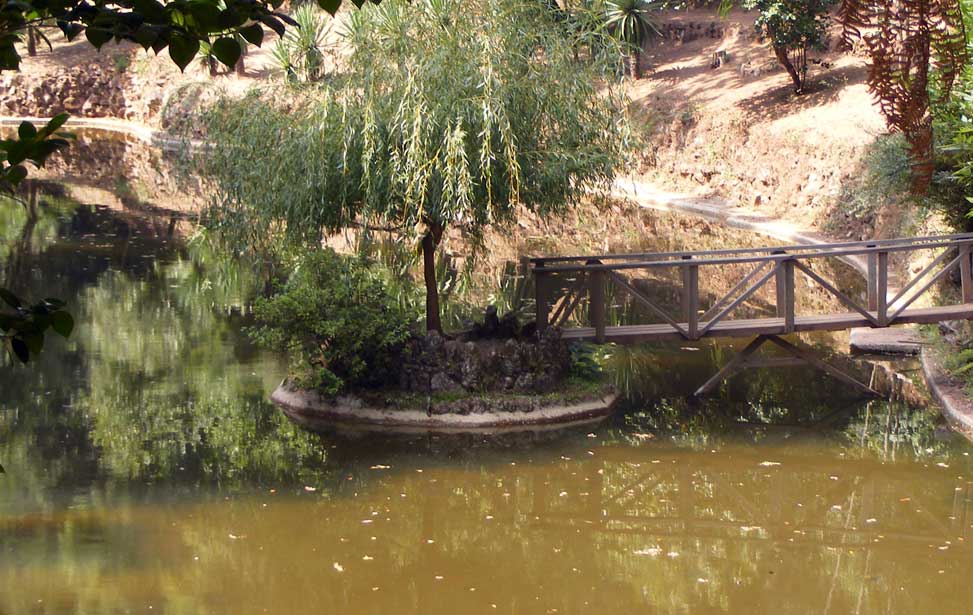 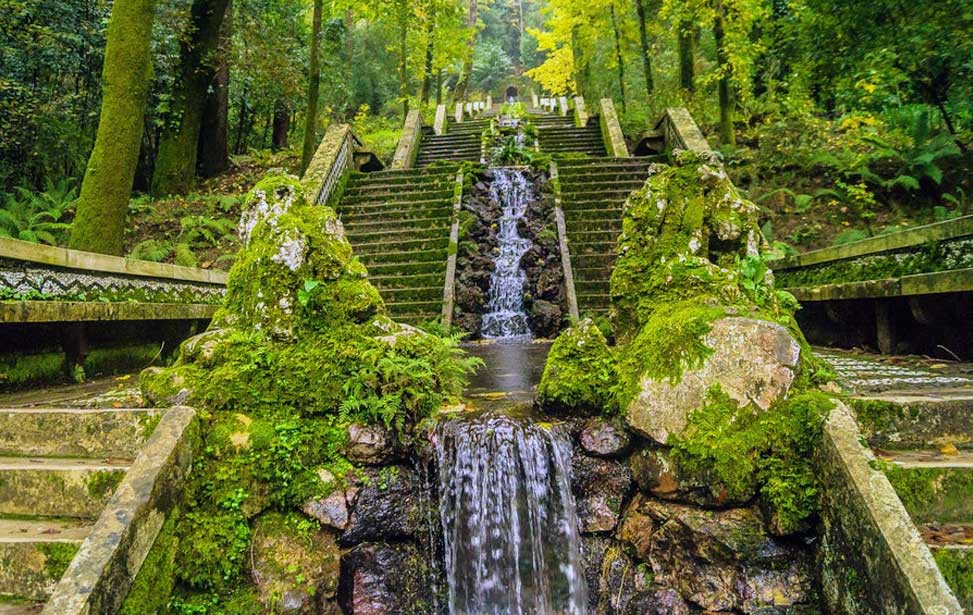 The park is a genuine botanical marvel boasting 400 native and 300 exotic species of trees, including tall cedars of Lebanon, Mexico, India and Africa; along with impressive cypresses, ancient ginkgo trees, sequoias, araucarias and palms, brought by Portuguese explorers from the New World and Asia. The trees are protected by a Papal Bull issued in the seventeenth century threatening anyone damaging the trees with ex-communication. Within this landscape the visitor wanders the footpaths and left to explore, encountering hidden grottoes, ponds, fountainheads, chapels, hermitages and oratories along the way. The Fonte Fria on the northern slope is a cascade of 144 steps, water descends to a basin surrounded by shrubs and conifers. The Fonte do Carregal flows out of a grotto on the south side. Buçaco forest was first settled in the sixth century AD by the Benedictine monks of Lorvão. They established a hermitage on the eastern slopes of the mountain.

From the Buçaco Palace Hotel, follow the stations of the cross up the hillside, you will pass a series of large shrines containing life-size terracotta figures of Christ, his disciples, and other characters in the Crucifixion story. At the end of the path at an altitude of 541 metres (1,775ft) stands the Cruz Alta which commands excellent panoramic views extending as far as the Serra da Estrela and the Atlantic Ocean.

Found on the northern side of the park is the Fonte Fria. Mountain springs water cascade downhill over 144 steps within the cool shaded forest. At the foot of the Fonte Fria is a pond home to waterfowl surrounded by beautiful flowering shrubs and several thuja trees.

At the heart of the park, surrounded by flowerbeds complete with a garden maze, stands the former summer residence and hunting lodge of Dom Carlos I. Built between 1888 and 1907 by the Italian architect Luigi Manini in an impressive Neo-Manueline style. It is an architectural folly, with influences from Lisbon's Jeronimos Monastery, Venice's Doge's Palace, and Bavaria's Graustark Palaces, consisting of galleries with flamboyant arches, armillary spheres, turrets, and spires.

The interior houses a grand marble staircase and wall tiles by acclaimed artists depicting scenes from Portuguese history, including the Battle of Buçaco. Since 1909 it has been one of the most luxurious hotels in Portugal. Open to non-guests, the restaurant sports a carved Gothic ceiling and a famous Manueline terrace, under which one can enjoy fine cuisine and Buçaco's own wine.

The individually decorated rooms have a classic décor and a satellite TV for a modern twist. They all include period furniture, ranging from 18-century to Art-Nouveau pieces, and some rooms overlooks the hotel’s extensive gardens. 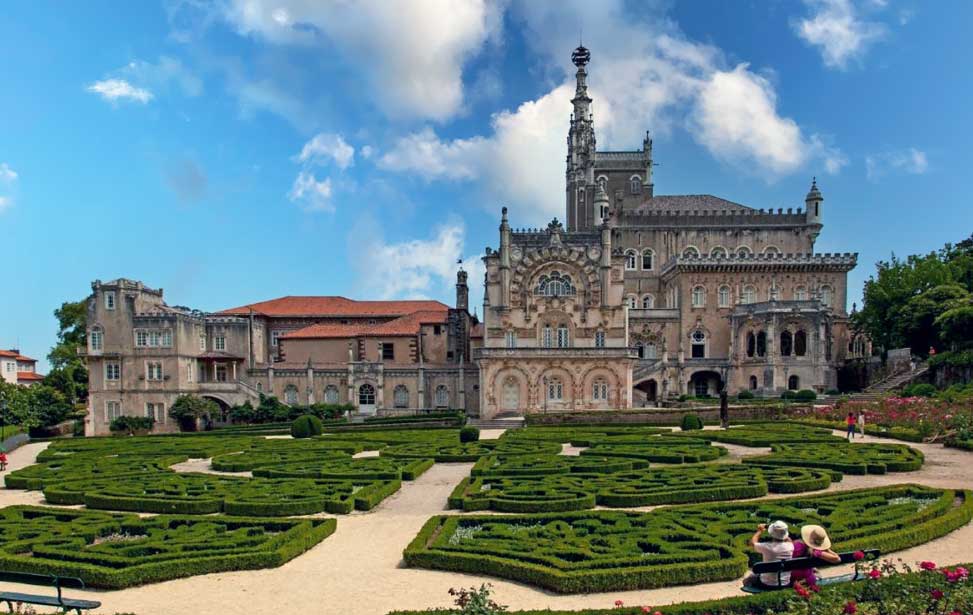 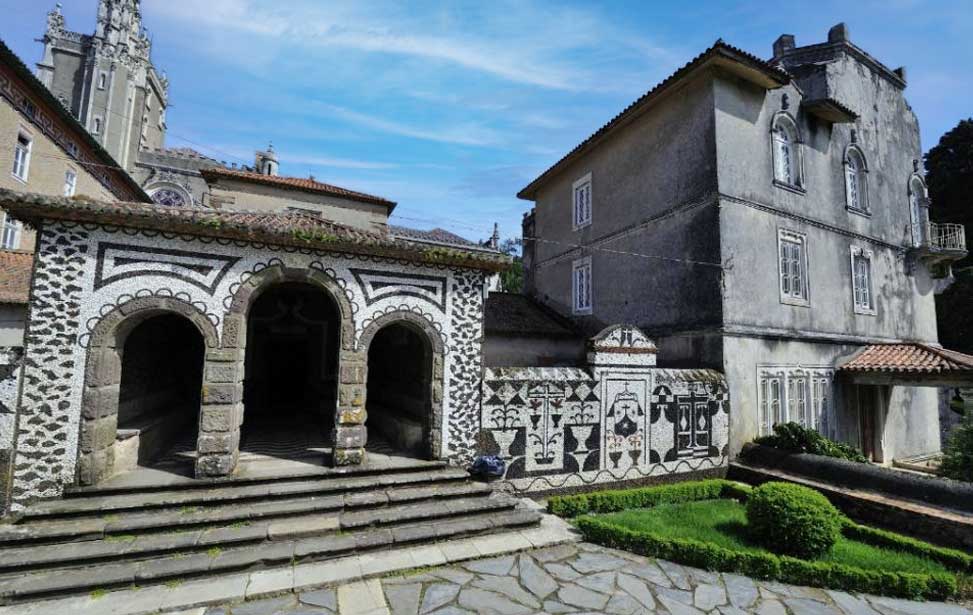 The Palace Hotel stands over the grounds of a small monastery, one of many religious retreats found scattered around the area. During the sixteenth century the Vicar General of the Barefoot Carmelites considered this to be the ideal spot for building a retreat. A place where the friars could devote themselves to a life of contemplation in contact with nature. Today, the only parts of the original monastery that can be visited are the cloisters, the small church containing sculptures and paintings illustrating the history of the monastery, and some of the monks' cork-lined cells. 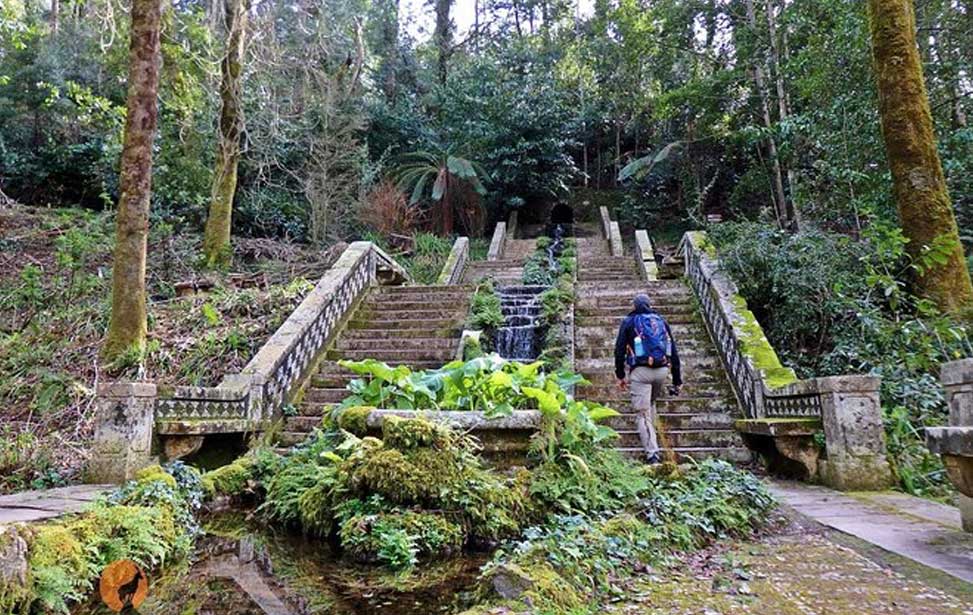 An adventure through the Buçaco National Forest

Buçaco is a forest where every nook and cranny has a story to tell. Venture out from Coimbra or Mealhada and discover the magical nature of this forest. Get to know the area through an interpretive visit, all its history, discover the biodiversity and importance that Buçaco National Forest has. An adventure where you will have the opportunity to visit a dense and unique forest with autochthonous species, presenting characteristics typical of a primitive landscape. Lowest Price Guarantee. Transport with collection in the area of Coimbra or Mealhada for an additional €5. Photos of the tour are included. 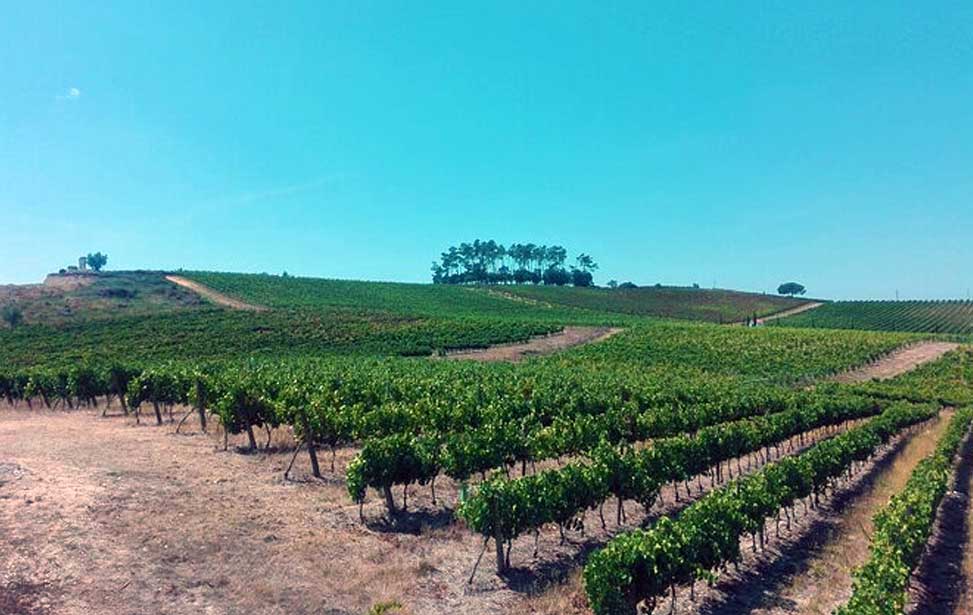 Bairrada is one of Portugal’s most prestigious wine regions and lies just north of Coimbra. On this tour, learn more about Portuguese wine and Bairrada’s wine-making heritage as you visit one of two wine cellars and sample the region’s famous sparkling wine. Afterwards, explore the natural landscapes of the Buçaco Forest and perhaps stop at a local restaurant to sample the local delicacy, Roasted Piglet - Leitão (own expense). Private tour: customise your itinerary and make extra stops. Guided wine tasting, including sparkling wine. Choice of morning or afternoon tour departure from your Coimbra hotel. 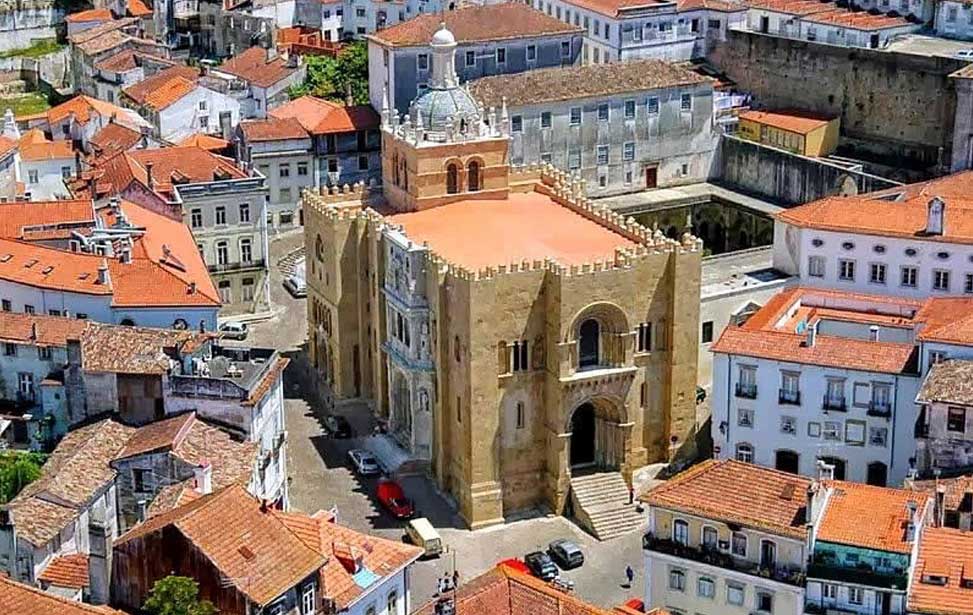 Tour the student city of Coimbra and the royal palace of Buçaco with a private guide on this tour from Porto. Make the most of sightseeing on an excursion that includes hotel pickup and drop-off and in-depth commentary about the history of each site. A private tour of Coimbra and Buçaco from Porto. Visit one of the oldest universities in Europe. The narrated tour provides insight into every landmark. Tour accommodates one to eight passengers. Hotel pickup and drop-off from Porto included.

Sitting 380 metres above sea level in the little spa town of Luso nestled in a picturesque setting in the northwestern foothills of the Buçaco National Park. Famed for its chalybeate and radioactive mineral springs. Their healing powers are used to treat rheumatic and bronchial disorders. The waters supply the many spa hotels in the area. The water is also bottled and is highly regarded within Portugal. Indeed the spa waters are what transformed the fortunes of the 11th-century town after its discovery in the 1800s. Rainwater is filtered through the quartz bedrock of the Serra do Buçaco mountain before emerging through a spring in the centre of the town. The main drinking fountain is popular with those who treasure the waters of Luso and it's not uncommon to find people filling bottles. The town is characterised by the art nouveau houses and mansions which date back to the town's heyday. 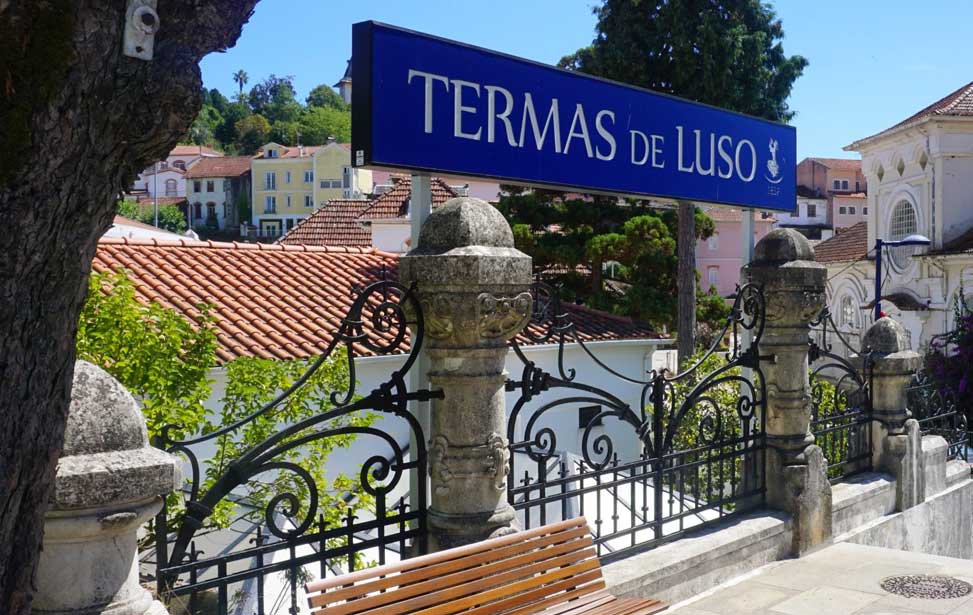 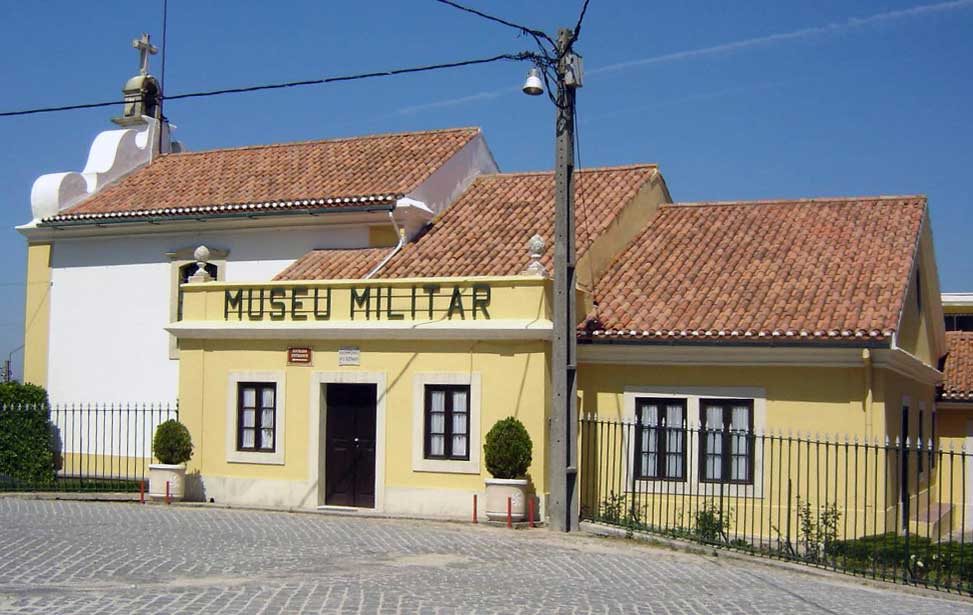 Close to the Porta da Rainha entrance to the Buçaco forest park, stands an obelisk that commemorates the battle of Buçaco. Napoleon's third attempt to take Portugal was thwarted by Wellington and his Anglo-Portuguese allied troops on the 27th of September 1810.

Here too is a military museum (Museu Militar do Buçaco). Inside there is a valuable collection of weapons, uniforms and equipment used in the battle, as well as paintings depicting this decisive battle of the Peninsular War. The museum was officially opened in 1910 on the centenary anniversary of the battle. It was later enlarged in 1962. On the 27th of September each year, during the Festa da Senhora da Vitrem festival, the battle is commemorated with a lively reenactment. 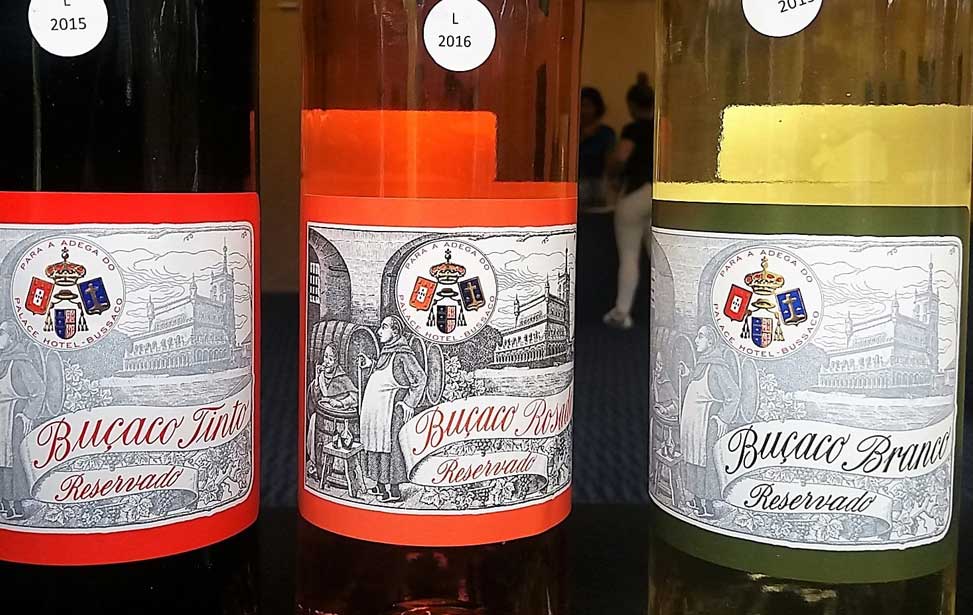 Since its inception in 1917, Buçaco wine was designed to be a blend of two designated wine regions, Dão and Bairrada. From Dão come the Touriga Nacional grape and from the Bairrada region, Baga. White wines are made from Encruzado, Bical and Maria Gomes but the reds are the most special. The grapes are fermented separately. The ageing takes up to 12 months in 50% new 300L French barrels and 50% used barrels (2nd year). The wine is usually released 4 years after bottling. In 2010, the decision was made to start bottling this wine from Vinha da Mata, a unique Bairrada vineyard in the heart of the Bussaco forest. It is bottled only in exceptional years. The wine is available to try and buy from the Palace hotel. Their current vintage list in the palace's dining room goes as far back as 1944.. 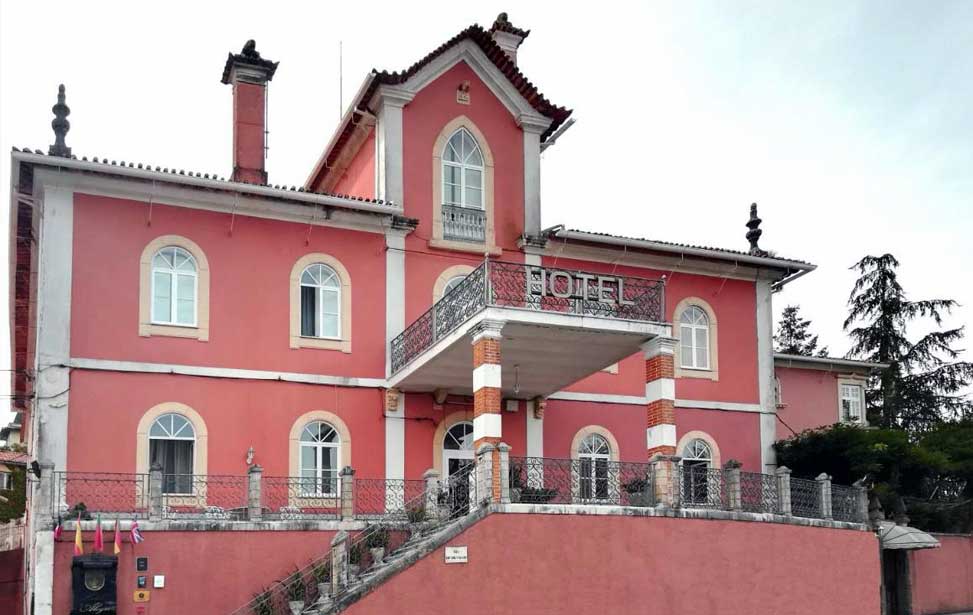 The Alegre Hotel is a delightful, intimate boutique hotel nested in the exquisite woodlands of the Bussaco national forest, just 150 meters from the main entrance to the woods. Located in Luso, just 200 meters from the SPA, in the Historical Palace of the Count of Graciosa. The hotel is equipped with Swimming Pool, Private car parking and all the rooms are decorated in a 19th Century style with modern facilities and comfort. 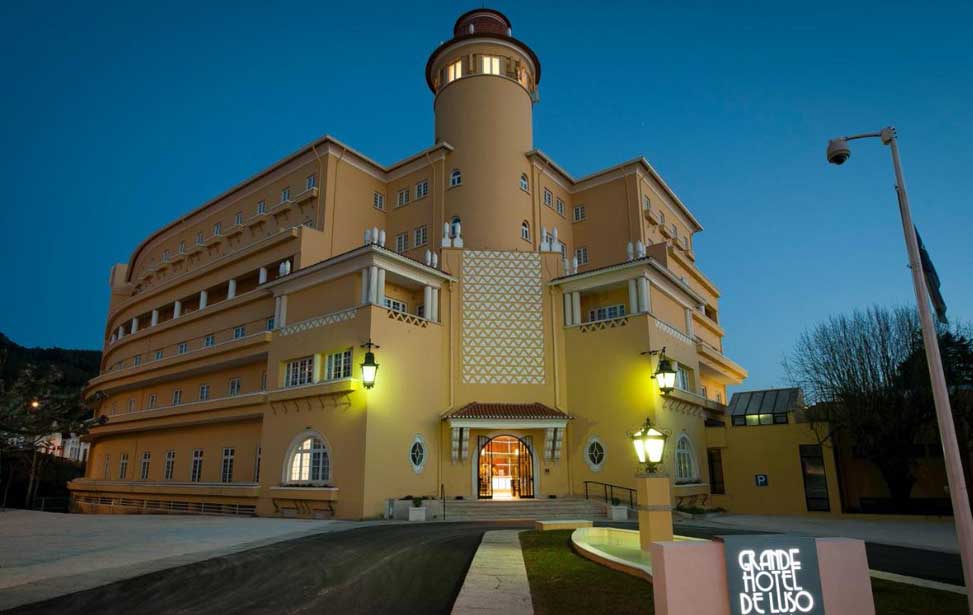 Located on the hillside of the famous Serra do Bussaco, the Grande Hotel de Luso is a symbolic hotel that for almost 70 years is a meeting point of choice for any occasion. The building is a project of the Portuguese architect Cassiano Branco and dominates the landscape of the village of Luso, it is also rightly famous for the excellent quality of ultra-pure water that is born here. 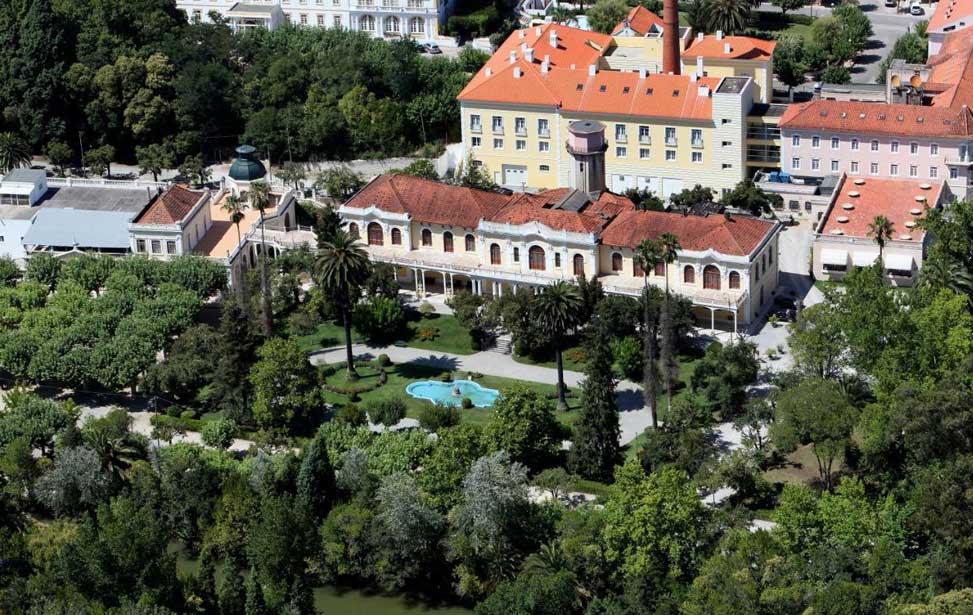 The Hotel das Termas - Curia, Termas, Spa & Golf is a thermal, health and spa hotel located in Curia which includes benefits from the green and relaxing landscapes of Curia Park and Golf Course. With 105 comfortable rooms with views over Curia Park, four meeting rooms, restaurant, bar, coffee-shop, and a summer bar to support the outdoor swimming pool, the Thermal Centre, the Spa and the golf course only 250m away. 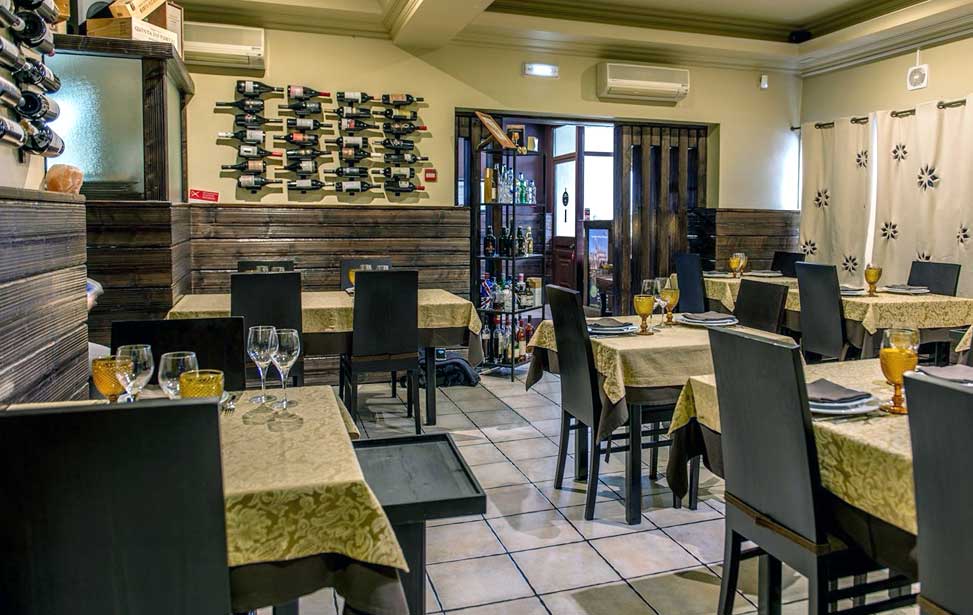 This small and romantic restaurant is welcoming and friendly. The food is traditionally hearty, typical of the Beiras region and good value for money. The roasted black pig is worth a special mention. A good choice of local wines is also available. 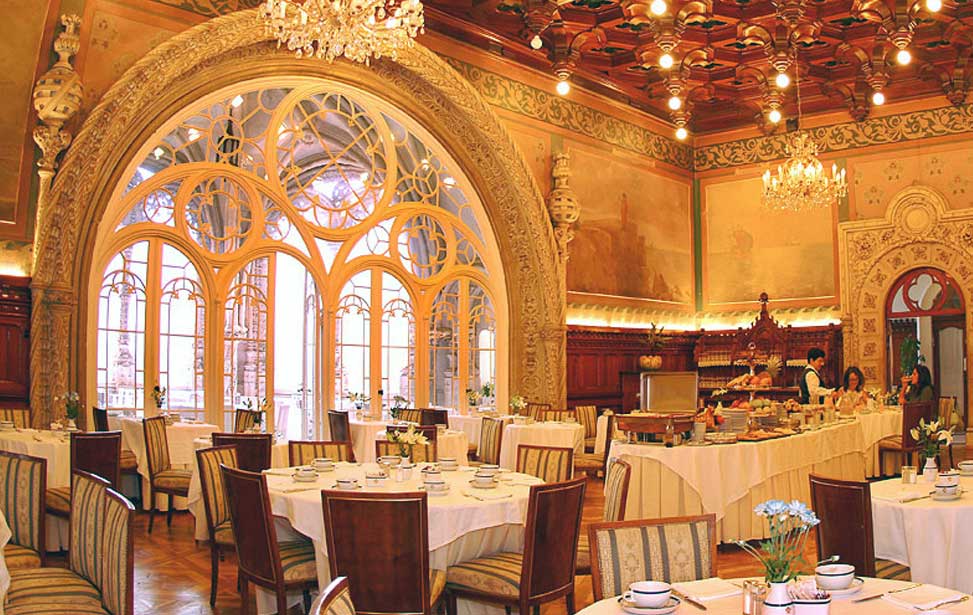 An opportunity to dine in style within a former royal banquet hall. With chandeliers, intricately carved ceiling, ornate Neo-Manueline design, impressive paintings and beautiful doors opening onto the terrace, housed inside the Palace Bussaco hotel.

The restaurant serves cuisine that fit for the Royal Family. Choose between classic French high cuisine and traditional regional Portuguese cuisine, such as the famous roast suckling pig and kid. It would be a shame not to accompany this with the exceptional Bussaco wine, exclusive to the hotel group.

Afternoon tea or a relaxing drink can be enjoyed the impressive Salão Nobre (Noble Hall) in equal luxury. At the end of the hall is the bar, where one can enjoy the huge selection of Portuguese and international drinks. What about settling down in a comfortable armchair and making the moment perfect by sampling the fine regional wines and liqueurs, or a rare Vintage Port? 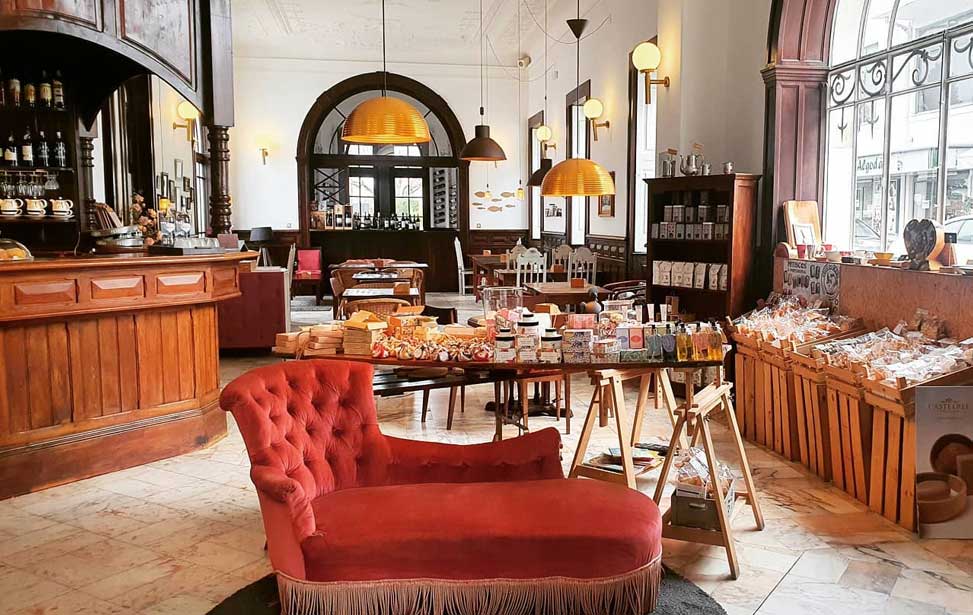 Found within the centre of Luso, close to the town spa fountain is this charming friendly tapas restaurant. Eating here is a dining experience to be savoured and not rushed. A good selection of tasty delights on the menu including a selection of vegetarian options, salads and light meals. Also a great place to enjoy a coffee and something sweet. If possible take advantage of the outdoor seating and watch the world go by.