There has been a settlement here spanning the Tãmega river since Roman times. Its agricultural history is probably much older. The local hot springs first attracted the Romans here and today the town still retains its baths, famed for their effectiveness against rheumatism and internal ailments. At a temperature of around 70º C, they are the hottest Springs in Europe.

The Roman town (known as Aquae Fluviae - named after Emperor Titus Flavius Vespasian) became an important staging post on the road between Asturica Augusta (Astorga) and Bracara Augusta (Braga). The evidence of this road takes the form of the remaining Roman bridge that dates back to the emperor Trajan (98-117AD), its 16 arches and two milestones lay a testament to ancient engineering.

Since the formation of the Portuguese state, this beautiful town has found itself on the border with Spain and gained much importance as a strategic city is reflected in the town's name meaning "Keys". During the sixteen century, Chaves withstood annexation by the Spanish and later in the nineteenth century, invading Napoleonic troops suffered their first defeat on Portuguese soil at Chaves. For this reason, the medieval town remained enclosed within its defensive walls forcing buildings to become taller to generate more living space. It's these hodgepodge tall houses and the narrow streets between them which add so much charm to the older parts of the city. Today the city is much quieter and more renowned for its richly varied cuisine; in particular for its sausages, cured Presunto hams, delicious meat cakes (bolas de carne), and strong red wine. Every year in mid-August Chaves hosts the ten-day Feira de Artesanato, held in the Jardim Público as well as the winter fair, held at the beginning of November. 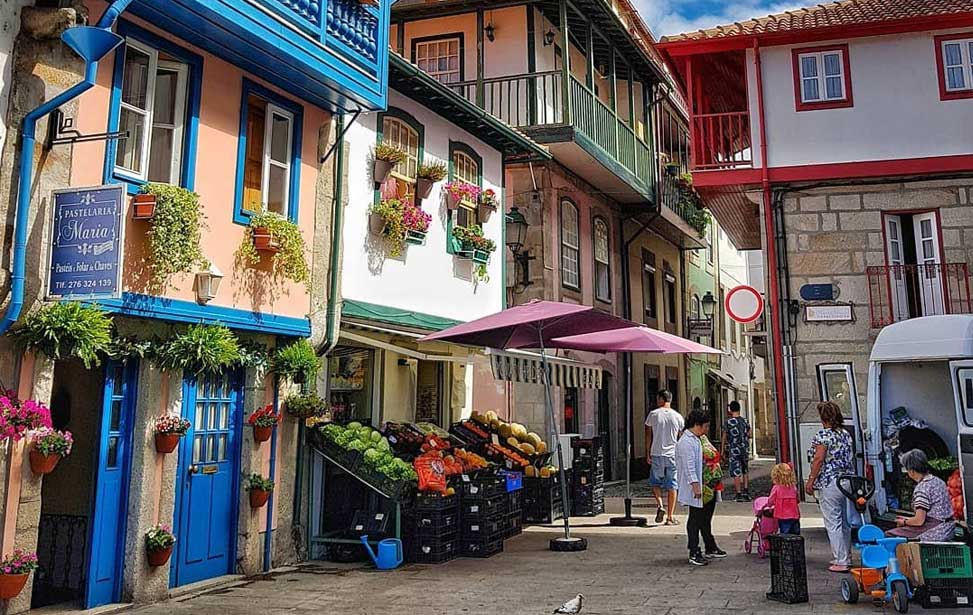 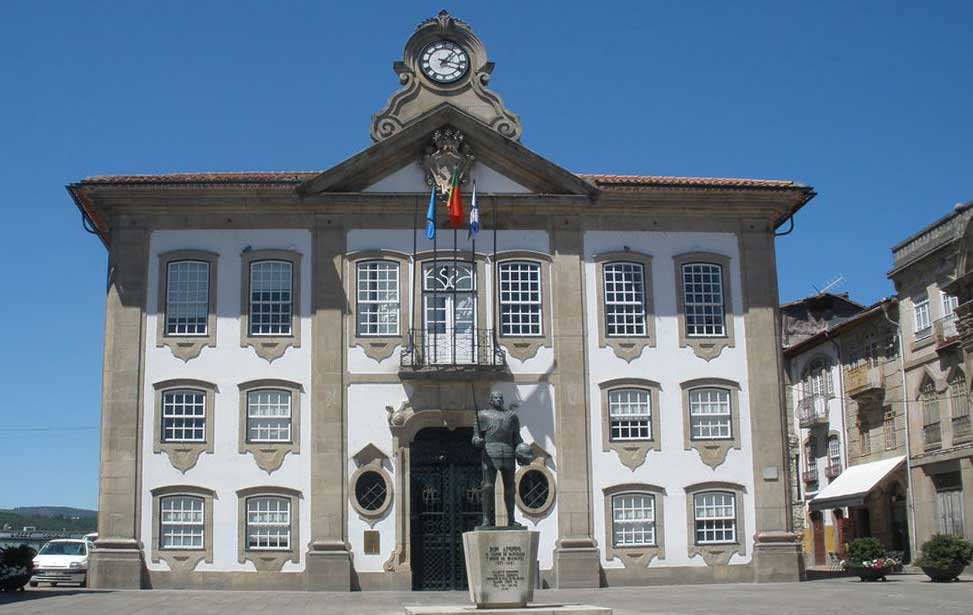 Narrow streets lined with authentic old houses elegantly adorned with wooden balconies await the visitor to the old town. This part of Chaves would have been the original city crammed within the defensive walls, the limited space resulted in taller buildings and narrower streets. As more floors were added to these buildings the more they overhang the previous levels leaving houses opposite in shade. The main artery through the old town leading your away from the river is the Rua Direita which passes the pretty square of Praça de Camões.

This square retains much of its original charm with no modern intrusions to spoil its appeal. At one end a statue of Dom Afonso, the first Duke of Bragança stands sentinel in front of the town hall. On the opposite side of the square stands the Igreja de Santa Maria Maior (church of Saint Mary) whose origins date back to the Visigoth era sometime in the 12th century. It sustained major damage during the Arab occupation but it's believed the bell tower and medieval portal are original features. The church was restored during the reigns of Dom Jõao III utilising the romanesque style, its gabled entrance is typically Italian in influence. Inside can be found preserved the medieval structure composed of three naves and robust stone columns. The wooden ceiling however is the 19th century.

Located on one side of the square is the seventeenth century Igreja da Misericórdia, which is typically Baroque in style. The granite facade, preceded by a stone staircase, is detailed and lavishly decorated with pilasters and windows. The interior of a single nave, the walls are decorated entirely with tiles from the eighteenth century, illustrating various biblical scenes. The wooden ceiling is lavishly painted and dates from the mid-eighteenth century (l743). Finally, the altar of gilded wood is richly decorated.

Next to the Igreja da Misericórdia and house within a lovely 17C building is the Museu da Região Flaviense which houses a chaotic assortment of archaeological and ethnographic pieces from Chaves' chequered history. The collection includes a room of prehistoric lapidary objects containing Roman items (sculptures, military posts) and the star attraction - a megalithic human-looking figure (2000 BC). There are ample remains from the old Roman spa settlement including coins, statuettes and fragmented mosaics. Upstairs you will find coins, an ancient minting plate, a magic lantern, radio receivers. On this floor too there are also temporary art exhibitions. The entry ticket to the Museu da Região Flaviense also included admission to the Museu Militar in the Torre de Menagem.
Daily: 09h00 – 12h30/14h00 - 17h30 | Praça de Camões, 5400-517 Chaves, Portugal.
41° 44' 23.§" N | 07° 28' 17.6" W | +351 276 340 500 | municipio@chaves.pt

The road running along the town hall leads you to the site of Chaves' old castle where the only remaining feature is the 14th-century keep. Constructed from local granite it was built for Nuno Álvares Pereira. A national monument since 1938, the castle was built during the Christian Reconquista and helped strengthen Dom Jõao's claim as king. Within the four-floored building can be found a small military museum exhibiting uniforms, arms and regalia. More modern exhibits include displays focusing on Portugal’s involvement in WWI and its 20th-century colonial entanglements. From the top, there are fine vistas over the River Tâmega, the historic centre of Chaves and the pretty gardens which surround the keep. The entry ticket to the Torre de Menagem also included admission to the Museu da Região Flaviense. 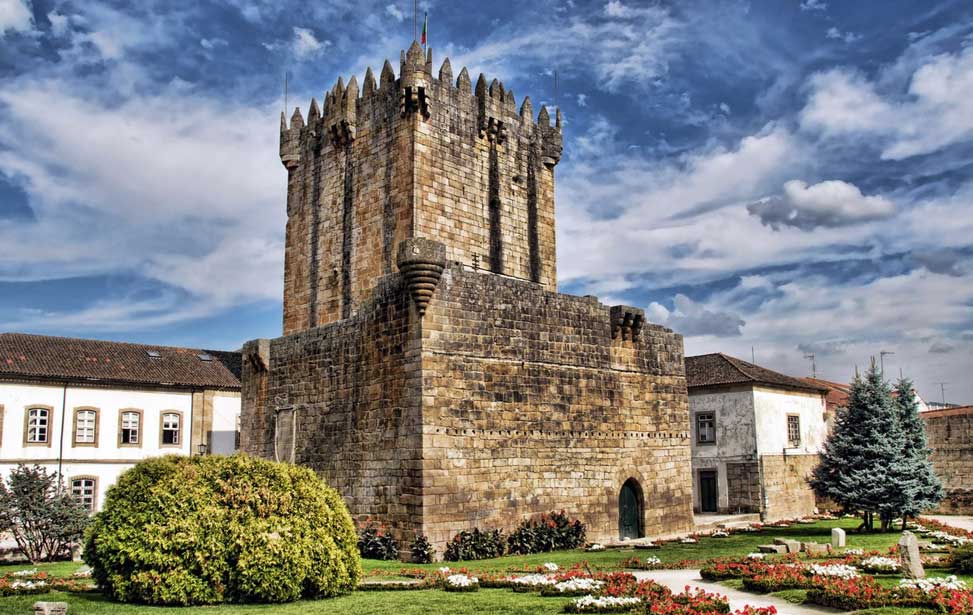 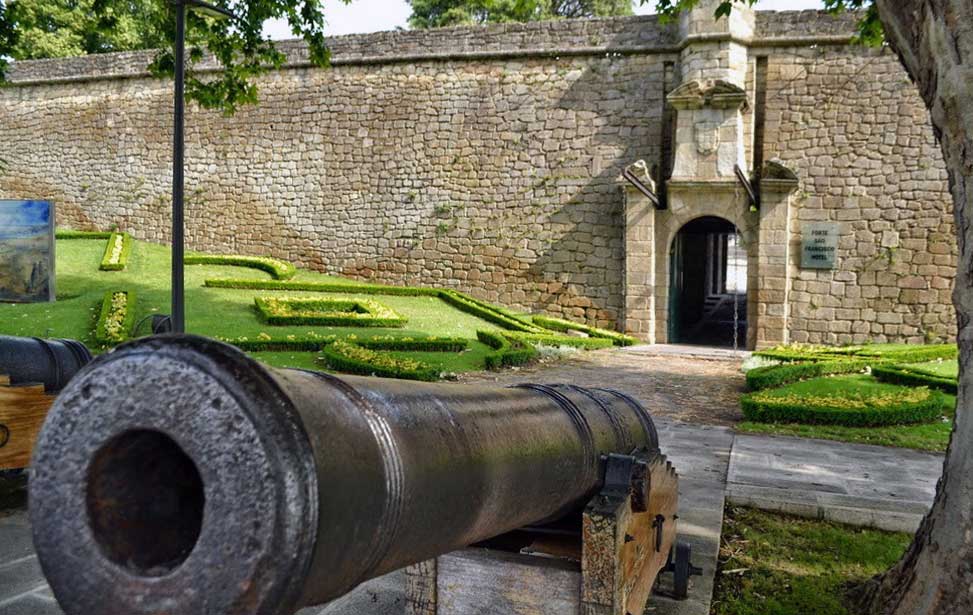 Built during the middle ages during the period of the Restoration War to defend Portuguese territory against Spain in the north. Built on top of a 16th Century Franciscan Convent, the Convent of Our Lady of the Rosary, gave the fort its name. The structure has a four-pointed star shape based on the Vauban system. The fort was captured by Marshall Soult during the Napoleonic invasions but was soon retaken. Later in 1910, the fort was embroiled in the pro-royalist revolts of the early 18th century. Forte São Françisco was classified as a National Monument in 1938.

In 2012 Forte de São Françiso was totally renovated and tastefully transformed into a beautiful hotel. Located in the historic centre of Chaves, the Forte Sao Francisco hotel is situated inside imposing walls and is surrounded by almost 15,000 sq. metres of beautiful, landscaped gardens and terraces. The estate also houses a private Church and Chapel. This hotel is the perfect location for those who wish to get away from it all and relax and unwind in a beautiful location. The swimming pool with sun loungers and Pool Bar is set in the garden, festooned with palm trees, and wonderful, panoramic views over the town and surrounding mountains. 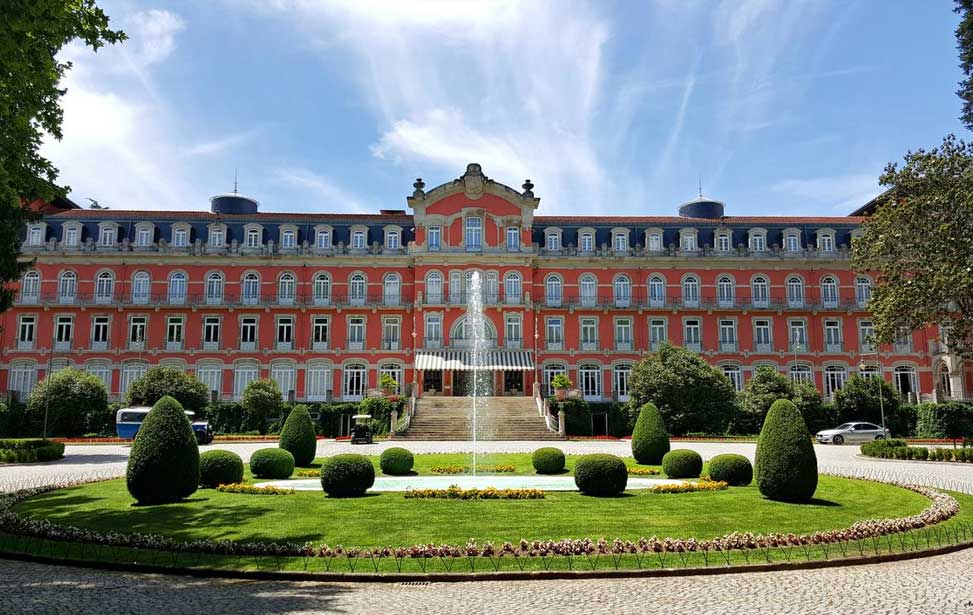 Vidago's mineral water is key to The Spa's character and is used in exclusive signature treatments. Aromatherapy Associates & Clarins provides many of the fragrant essential oils used for body treatments. Therapists have been trained to the highest standards and will leave you feeling properly cared for and thoroughly pampered. The Spa features 20 treatment rooms including hydrotherapy & couple suites, a 15m indoor swimming pool, outdoor vitality pool, hammam with steam room, sauna & ice fountain, relaxation room, yoga area and a fully equipped, state-of-the-art gym. The Spa Bar is open daily from 09h00 to 20h00. It serves light meals and refreshments. A selection of spa products can be purchased from The Spa's reception desk. Everyday 09.00 – 21.00 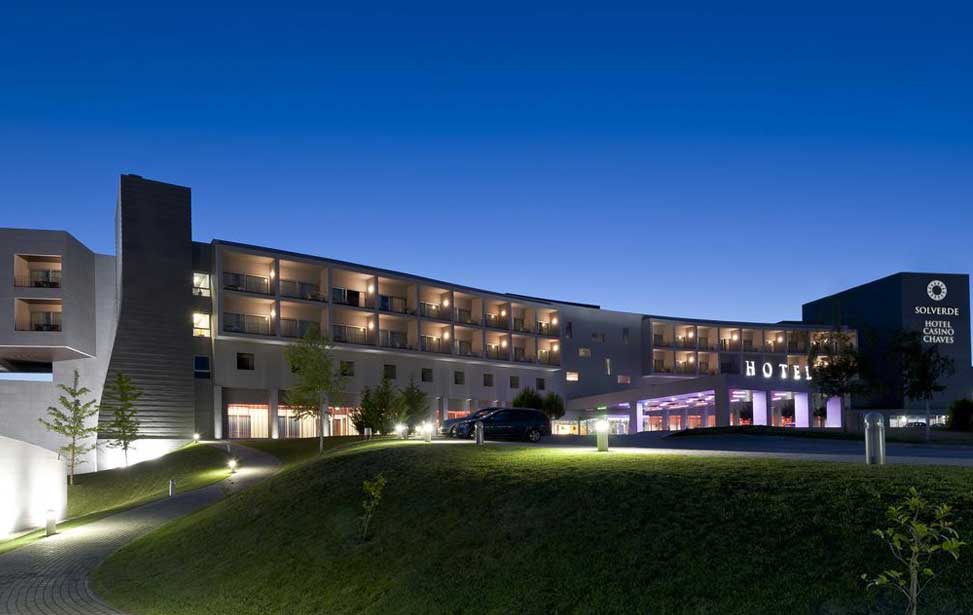 Situated near the exit of the A24 to Chaves, and only 8km from Spain, the Hotel Casino Chaves rises majestically over the city in a green area, which invites one to days of rest and leisure. Overlooking the city and the mountains, in a unique environment of tranquillity, the four-star unit is the ideal setting for those travelling for leisure or on business, looking for comfort, refinement and quality. The Casino, situated next to the Hotel, complements the offer by opening its doors to fun with a wide variety of games and slot machines, the best cuisine and cultural events and shows filled with national and international artists. 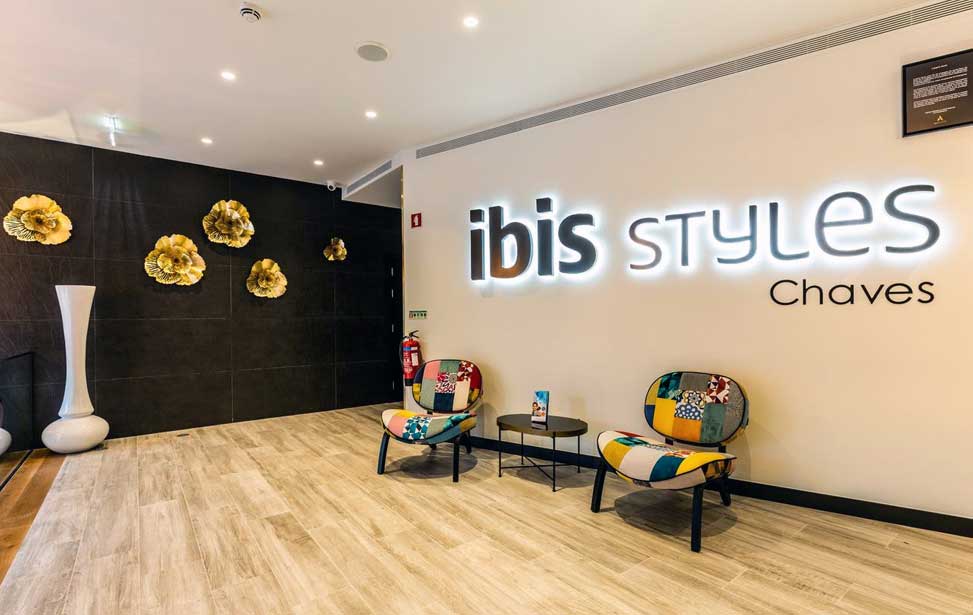 Featuring a terrace and views of the city, Ibis (pronounced ee-bish in Portuguese) Styles is located less than 550 yards from Chaves Thermal Spa. Featuring a bar, the three-star hotel has air-conditioned rooms with free WiFi, each with a private bathroom. Private parking can be arranged at an extra charge. At the hotel, each room includes a flat-screen TV with cable channels. A continental breakfast is available daily at ibis Styles Chaves. 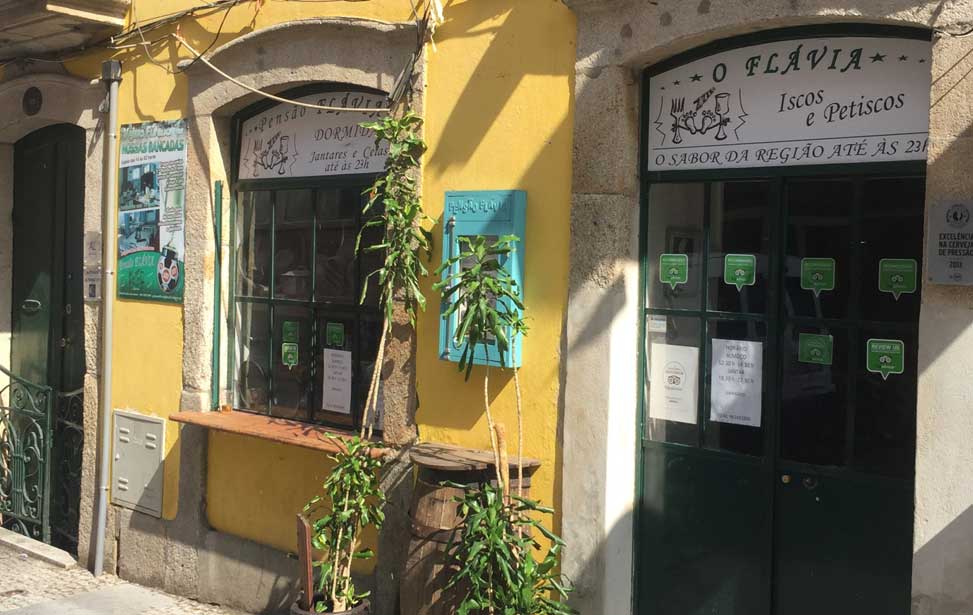 A great dinning experience that should not be rushed but savoured. Traditional local cuisine served by attentive and smiling (and sometimes singing) staff . The atmosphere is jovial and portions very generous, food is presented at your table you decide the dishes you wish to try and at the end you pay what you consider is a fair price. 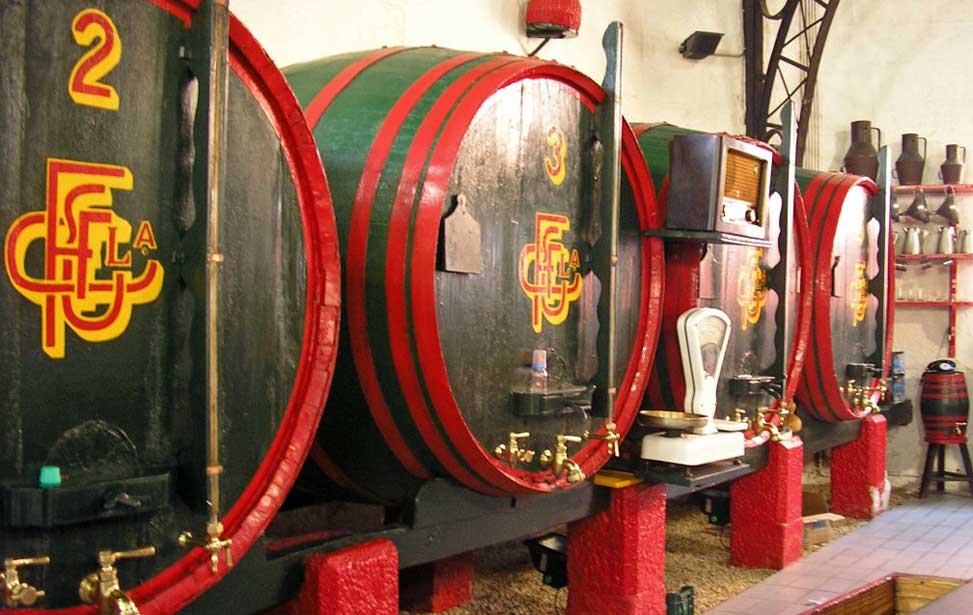 The décor recreates an ancient wine cellar with the use of wine barrels, Adega do Faustino is more than a novelty restaurant. It is ideally located in the old town of Chaves. Serving traditional local cuisine to a high standard. The Adega Faustino is not only a traditional restaurant, it also has a small museum describing its history, an art gallery and sometimes the restaurant hosts wonderful Fado nights.

Good ol' hearty meals crafted from locally sourced ingredients cooked to perfection. A warm friendly welcome awaits you and portions designed to share between two. Considering its prime location just off the Roman bridge the prices are reasonable.