Thirty-two kilometres (22mi) east of Faro and three kilometres (2mi) inland, the charming little town of Tavira straddles both banks of the Rio Gilão river in the quieter eastern Algarve. It has so far, resisted development and maintains much of its Moorish charms, albeit being rebuilt after the tragic 1755 earthquake. The region is the centre of Algarves' tuna fishing trade and salt panning. Indeed there is a feeling of the "Authentic Algarve" about the town. There is a heritage of Roman, Arab and Christian influences with unspoiled scenery of the Ria Formosa and islands found just offshore. 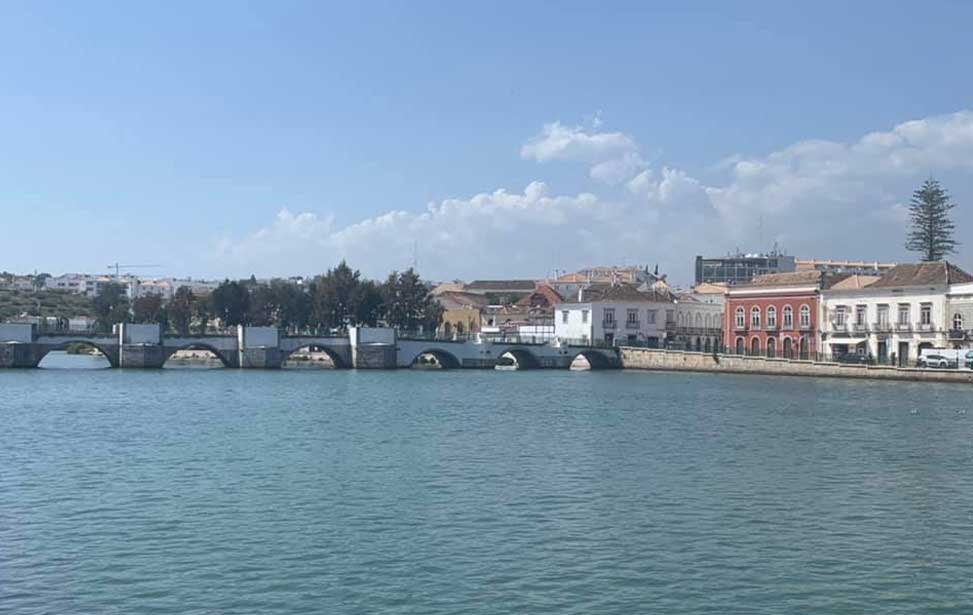 The origins of Tavira go back as far as 400 BC when the town was an important port that traded throughout the Mediterranean and North Africa. Tavira suffered badly from the Great Earthquake of 1755 and was largely rebuilt. Elegant eighteenth-century townhouses and mansions beautify the town today on both sides of the river. Many houses retain fine old doorways with traditional knockers in the shape of hands.

Joining the two halves of the town is the 17th-century bridge which is a reconstruction of the original bridge on the main route from Mértola to Faro. Modern scholars now believe the bridge is of 12th-century Moorish origins rather than Roman. Following damaging floods in the winter of 1989-90, it was pedestrianised. Its seven arches are often mirrored in the waters underneath where you'll often find people searching for clams at low tide.

Grand buildings, palm-lined gardens and the occasional seafood restaurant line the banks of the river Gilão and make a picturesque place for a leisurely stroll. The small boats moored up on the southern edge of town are a testament to Tavira's fishing heritage.

On the west bank you can find the arcaded Praça da República, with its little modern amphitheatre. Following the river south are the public gardens. Amongst the fine buildings that adorn its perimeter is the old town hall and its arches as well as a handful of cafés and restaurants. In the centre is a First World War memorial whose modern style seems ill at ease with its surroundings.

Tavira's old town market building was built in 1887 and occupies a dominant spot on the western bank of the Rio Gilão. Its original use was discontinued in 1999 and has now become a cultural centre, with boutique shops, cafés, temporary exhibitions and cultural events. The Mercado da Ribeira is the focal point for the Baixa District of Tavira where you'll find the largest concentration of restaurants.
37° 07' 30.8" N | 07° 38' 49.9" W

A short climb up into the old town following Rua da Galeria stands a 16th-century church with a fine stone doorway carved by André Pilarte (1551) depicting a series of mermaids, angels and saints. The Igreja da Misericórdia is commonly considered the finest church in Tavira. Through the ornate doorway are 18th-century azulejos, magnificent carvings and scenes from the life of Christ. Originally built in 1541 and rebuilt after 1755, it is still one of the finest examples of Renaissance religious architecture in the Algarve.
37° 07′ 35.2″ N | 07° 39′ 02.9″ W 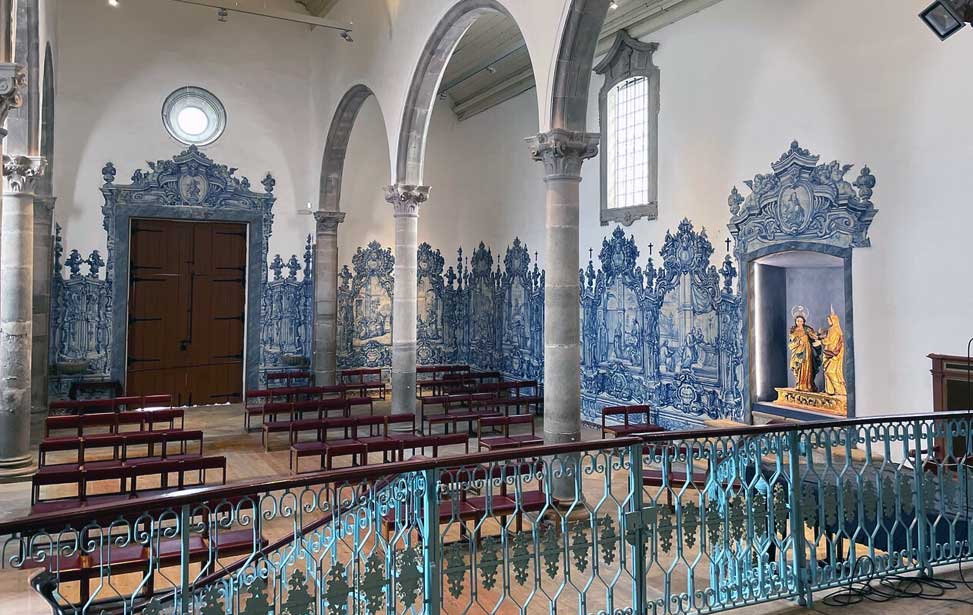 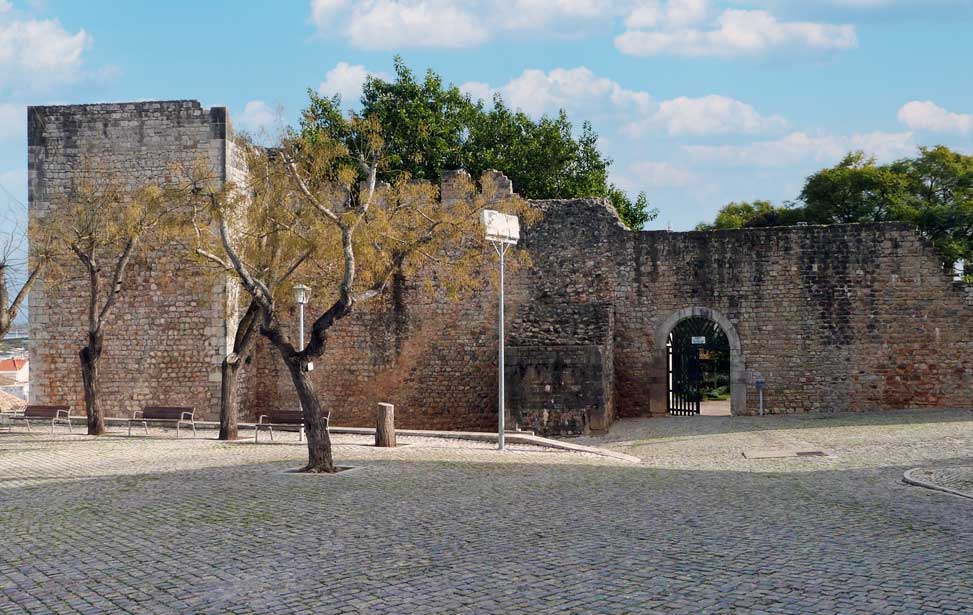 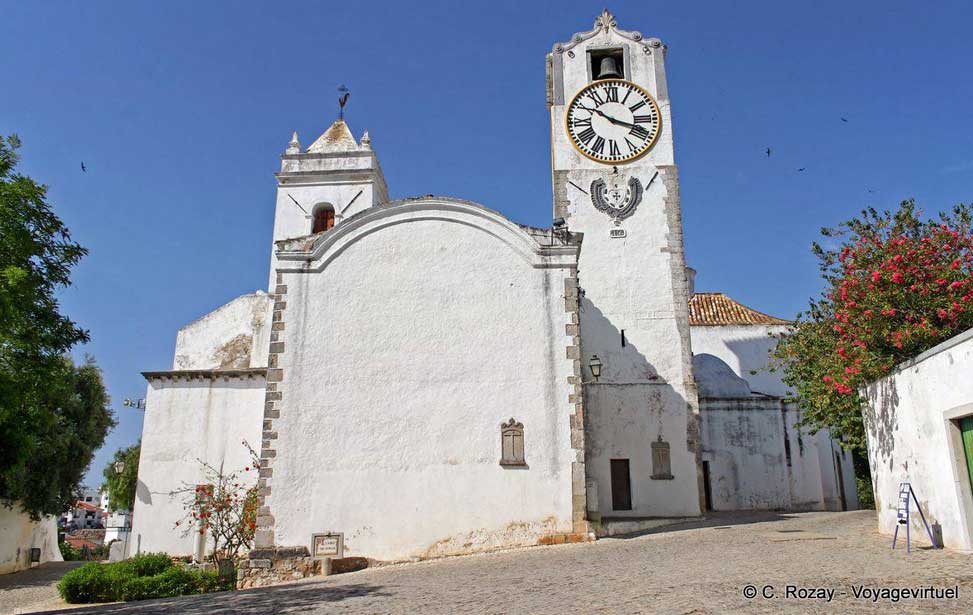 The remains of Tavira's castle can be found on a short stroll up the Travessa da Fonte from the Praça da Repúblic to the top of a small hillock. It's believed a defensive structure has been on this spot since the town was a Phoenician trading post in the 4th century BC. The Romans who resided here afterwards made their enhancements to the fortress. A later Moorish castle stood here too but was sacked on the 11th of July 1239 by King D. Paio Peres Correia during the Reconquista of the Algarve. After passing ownership to the Order of the Knights of Santiago, the Castle was reconstructed by King D. Dinis in 1293 to help defend the area from pirate attacks. It was to the power of nature that the castle finally succumb, the earthquake of 1755 that devastated Lisbon reduced the structure to the ruins we see today.

Tavira Castle now consists of two square towers, one octagonal tower and three rampart walls. Inside is a tranquil landscaped garden that offers welcome shade from the midday sun. A climb up the ramparts and towers is rewarded by impressive views of Taviras distinctive terracotta-hipped rooftops, church spires and the Rio Gilão. Since 27th August 2012, it is classified as a National Monument.

Some of the Algarve's finest churches can be found at Tavira the town and surrounding area contain over 20. Santa Maria do Castelo has stood opposite the castle since the 13th century, however it was built on the foundations of a Moorish mosque. Its façade maintains some of its original gothic design, notably the ornamentation around the main portal, and the ogival and rose windows. Its distinctive clock tower also belongs to the original construction, albeit with some alterations. Following the reconstruction, after the 1755 earthquake, the church took on a more neoclassical appearance.

Inside one can find the tombs of crusading knights belonging to the Order of St. James and Dom Paio Peres Carreira who took the town from the moors in 1242. Also inside are some impressive pieces of art including 18th-century tiles found in the Chapel of Santissimon.
37° 07' 32.0" N | 07° 39' 07.5" W 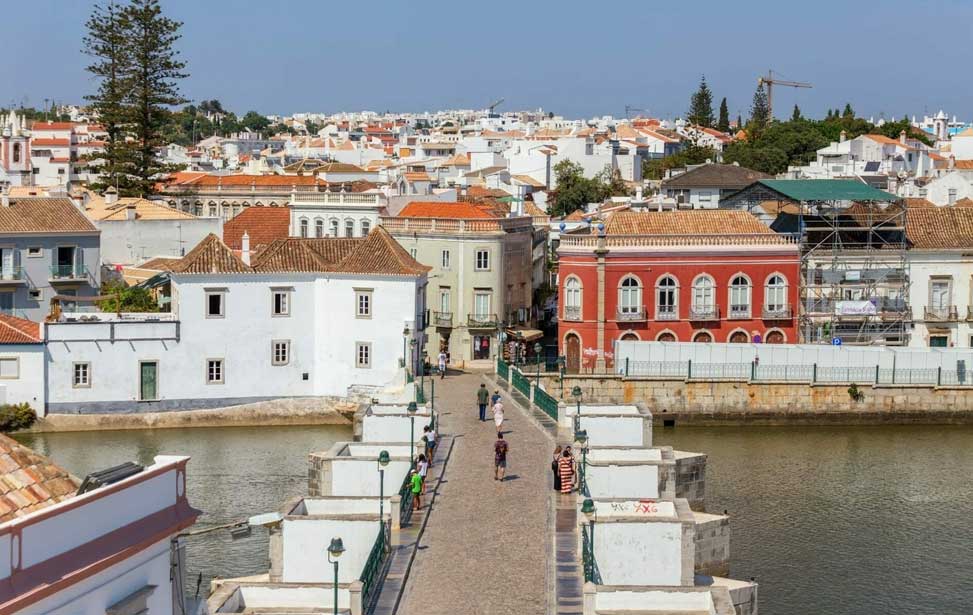 Embrace the magic of the East Algarve during a guided day trip to Faro, Olhão, Tavira, and Cacela Velha, leaving from the Algarve region. This tour visits the charming Old Town in Faro, the elegant capital of the Algarve. Explore architecture like Tavira Castle, a ruin considered to be from the Neolithic era. Then, enjoy free time to relish the mellow atmosphere in the fishing town of Olhão. Finally, pass by the Gilão River and absorb panoramic views in Cacela Velha, where your tour concludes. Make use of a hotel pickup and drop-off service that covers the Algarve region. 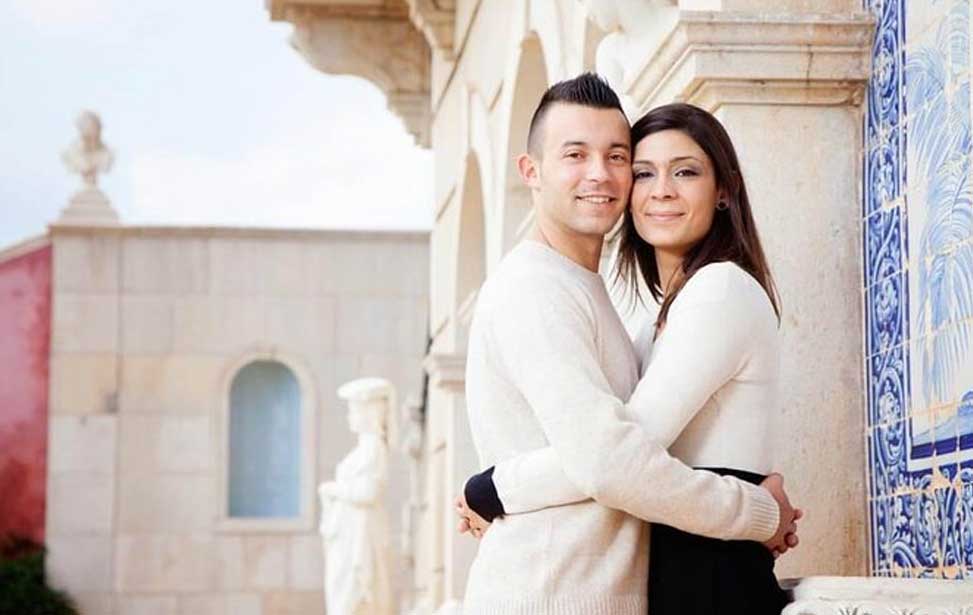 Private Photo Session with a Local Photographer in Tavira

Want to capture your amazing honeymoon? or a family holiday while the kids are still small? or maybe your perfect couples retreat from everyday busy life? Stop searching, we got you here! We are the largest network of local holiday photographers in the world! We always make sure that every special moment of each client is captured well. Free money-back guarantee. 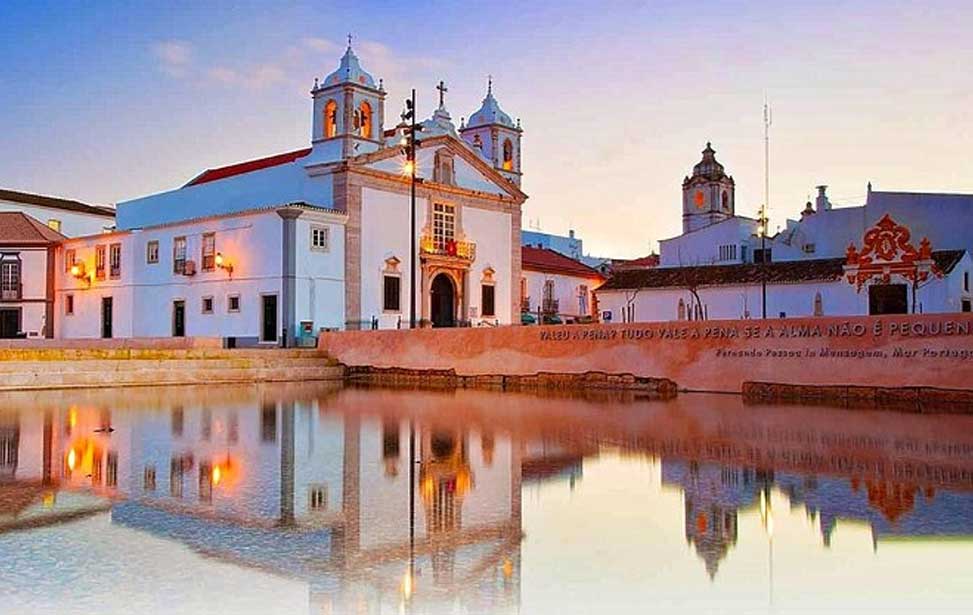 Two-Day Private Tour In the Algarve from Lisbon

Two-day private tour in the Algarve from Lisbon, perfect for those who wish to visit the Algarve region, but do not know exactly where or how. During these two days we suggest the visit to some of the most important places among them; Faro, Tavira, Albufeira, Lagos and Sagres, always with the historical accompaniment of each place and their main curiosities, this private tour can still be adjusted according to your interests or curiosity.

The mouth of the river (Rio) Gilão spills into the Ria Famosa lagoon and nature park which runs parallel to the coast. On the opposite bank is the loverly Ilha de Tavira (Tavira Island) which spans almost seven miles along the Algarve coast and its breadth varies from 1000 metres at its widest to only 150m at its narrowest. As part of the Ria Famosa Nature Park, it's a draw for wading birds and flamingos. The island is also considered to be the best beach in the eastern Algarve which, although popular during high season, never feels crowded.

This Blue Flag beach has a range of facilities such as restaurants and toilets, and during the high season is patrolled by lifeguards. The Ilha de Tavira is reached by ferry which has departures from Tavira centre on the Rua Jose Pires Padinha and the other departure point is just over a mile south of town at the end of the Estada das Quatro Aguas where you'll find ample space for parking. Both services traverse the Ria Famosa and land at the same jetty from where it is a short stroll through a pine forest to the beach.
Tavira Ferries Timetables & Tariffs 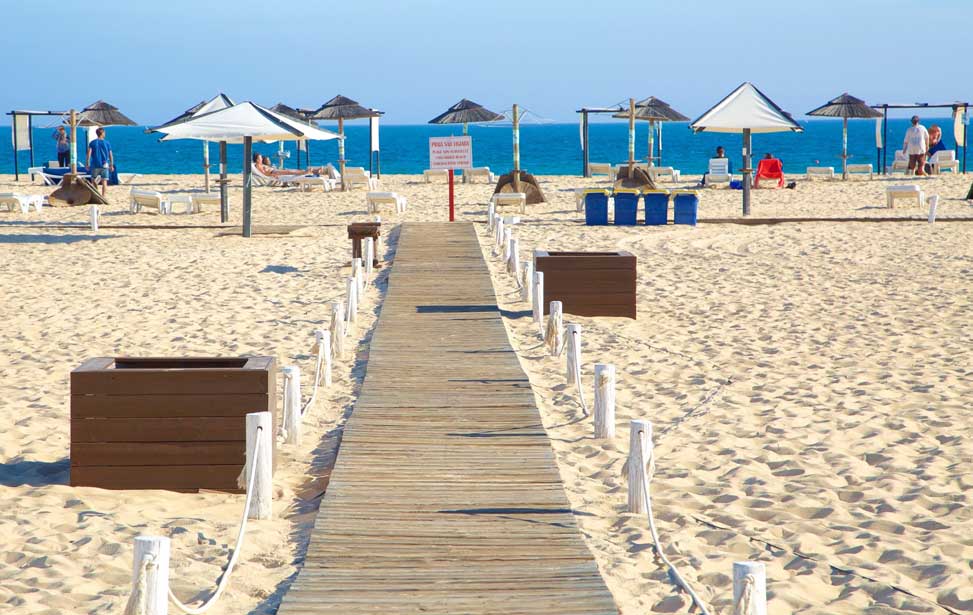 WHAT TO DO IN TAVIRA 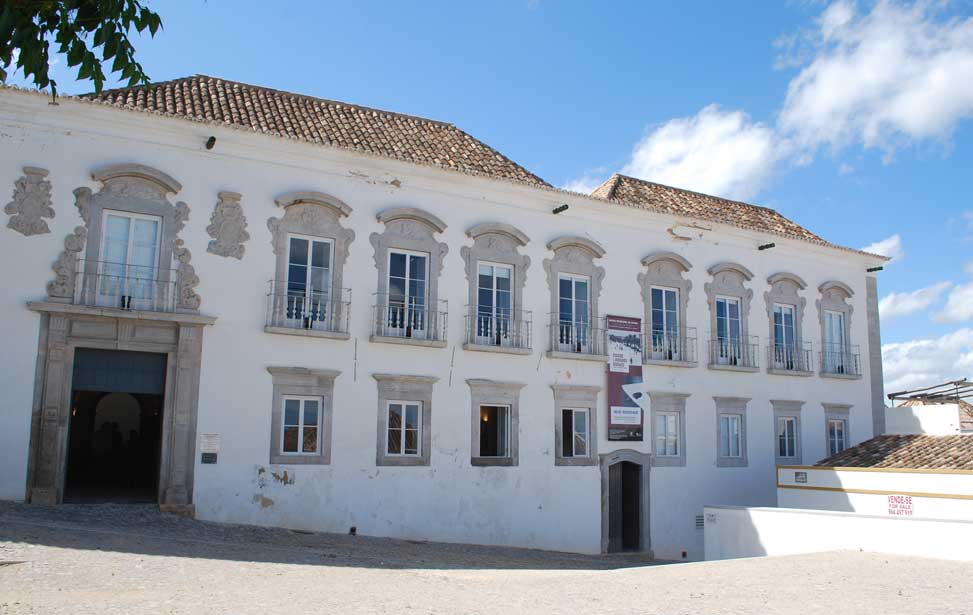 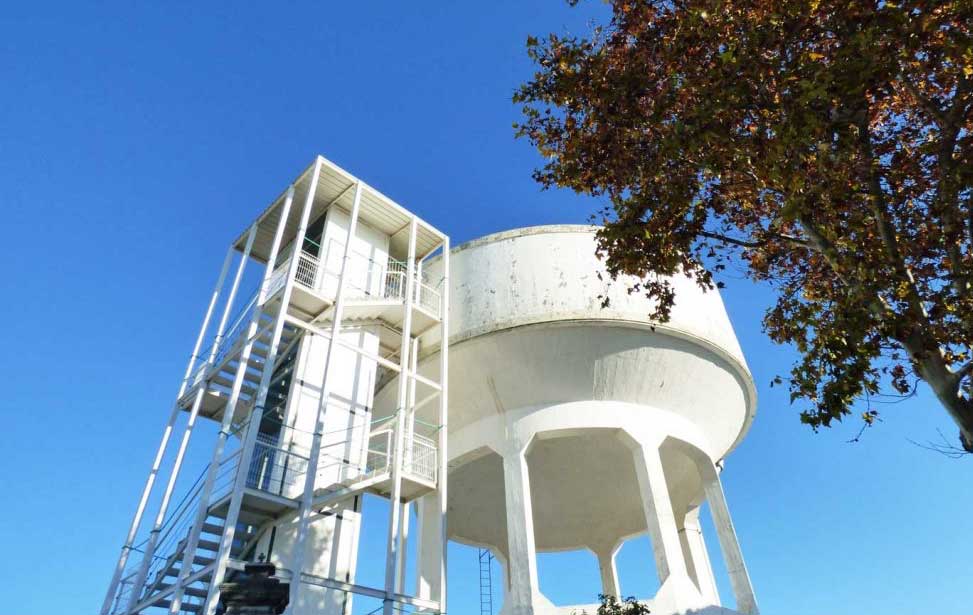 Close to the castle and Igreja de Santa Maria church is this former water tower which has cleverly been converted into a Camara Obscura. A lift carries you 100 metres to the top where a rotating mirror projects a 360º image of the town and area onto a large horizontal screen. The tour lasts for around 20 minutes and has commentary in English. 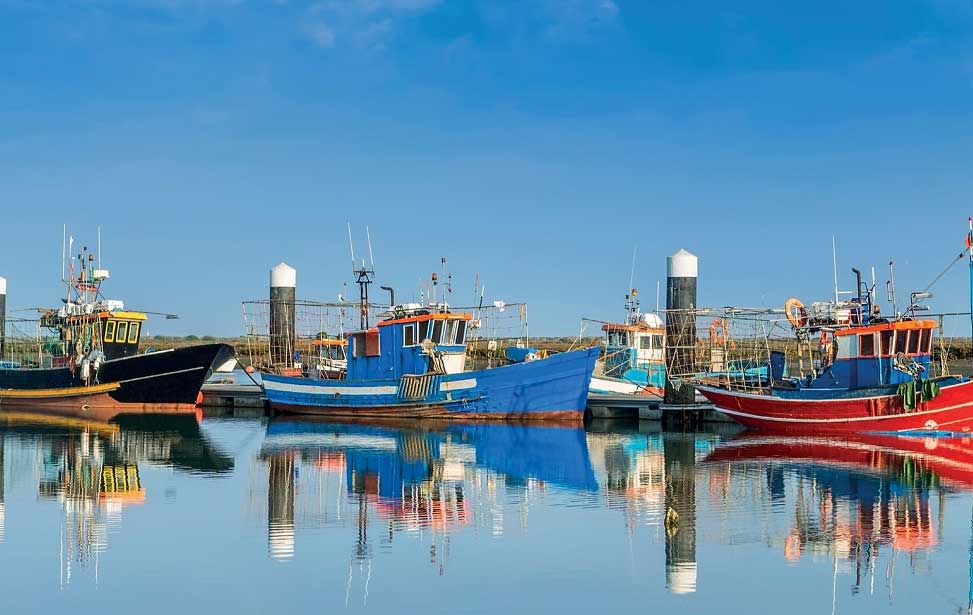 Sequa offers a range of boat trips including dedicated bird-watching tours, and introductory and detailed tours of the Ria Famosa. Boat hire with driver and water taxi services are also available. 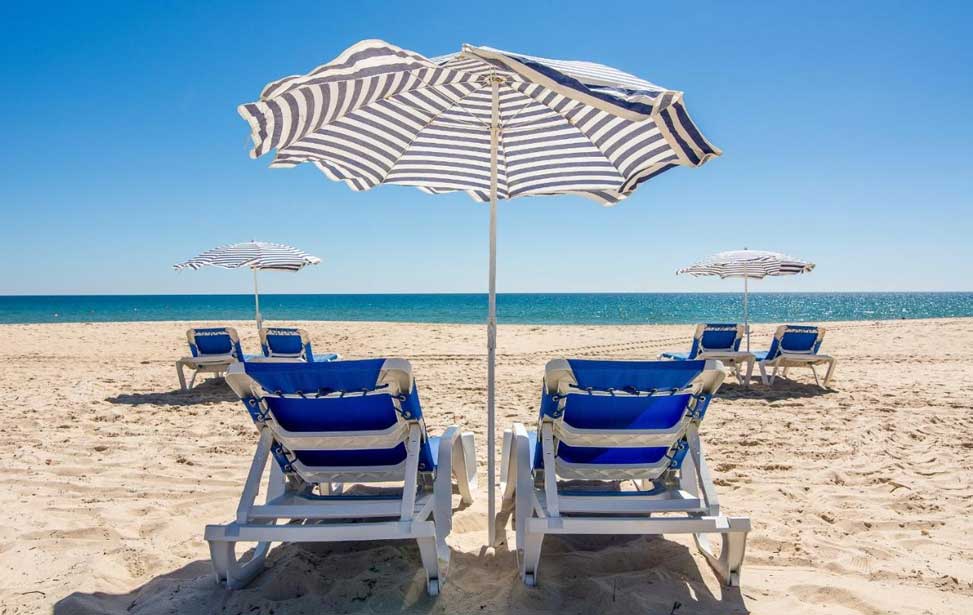 The Pedras D'el Rei resort is a short walk from the Barril Beach in the heart of Ria Formosa Natural Park and has all amenities on site. It has several restaurants, an outdoor pool and massage services. The rooms at the Pedras D'el Rei have a TV, a private bathroom and a kitchenette. Some rooms have a seating area or a balcony. The Pedras has a burger house, a pizzeria and a creperie. There is a free mini-train service to Barril Beach. The hotel's staff can also provide maps and special routes around the area. Algarve golf courses are just 10 minutes away by car. Free parking is available. 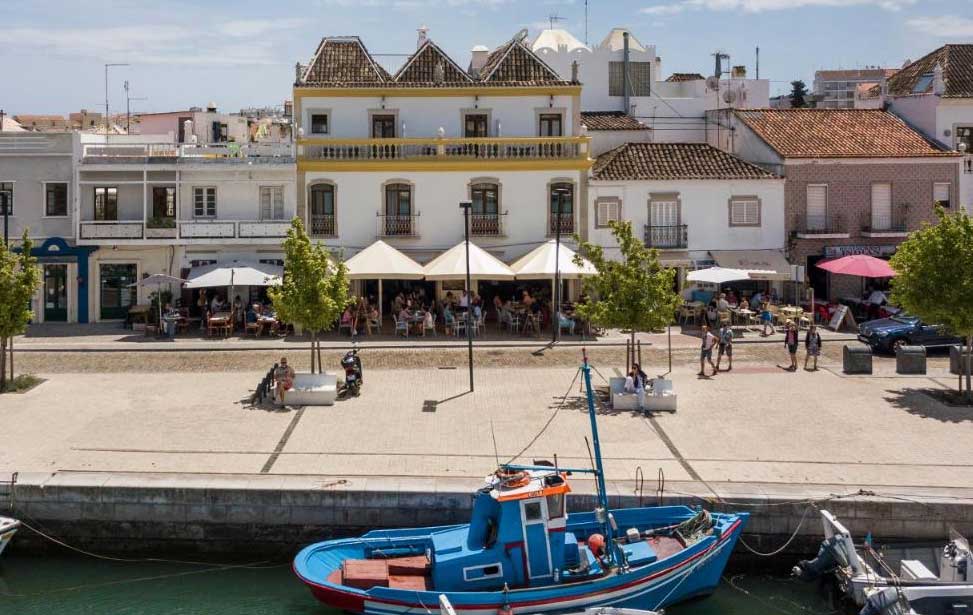 Located right on the riverside the Residencial Marés offers a basic yet homely accommodation, in an ideal setting to explore the old town. Air-conditioned rooms are simply decorated and include en suite bathrooms. They are all equipped with a TV set and telephone and some open out onto private balconies with panoramic views. Marés Residencial offers, also, a relaxing sauna, a sunny terrace with lounge chairs, free Wi-Fi connection, bike and car rentals on location. 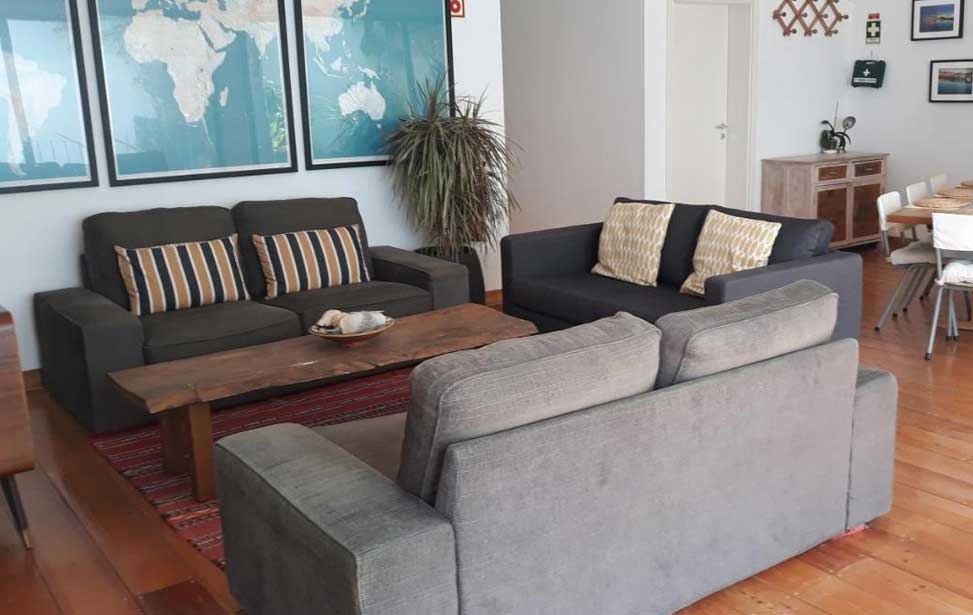 Hidden away amongst the ancient streets of Tavira, the Calçada Guesthouse combines a rustic exterior with a modern interior. It offers well-lit rooms, each with a private bathroom, and some come with river views. The individually decorated rooms at the Calçada feature a seating area and modern bathrooms, all with a shower and hairdryer. There is a communal area with free WiFi and seating areas with complimentary tea and coffee facilities. Guests can relax on the furnished sun terrace, or enjoy the local and international cuisine in the many restaurants and café’s less than 10 minutes walk away. 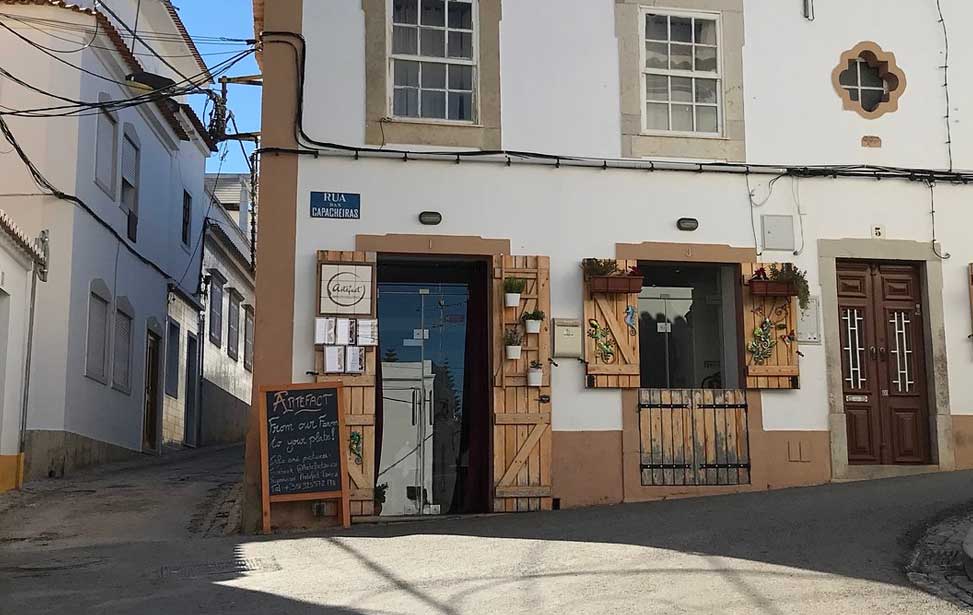 One of the newest eating establishments has risen to the ranks to be one of the best around. Utilising products from their own farm ensures the highest quality and freshness. Their passion and dedication to great food can be found at each stage with amazing results. Their attentive and knowledgeable staff are happy to go that extra mile for your convenience. 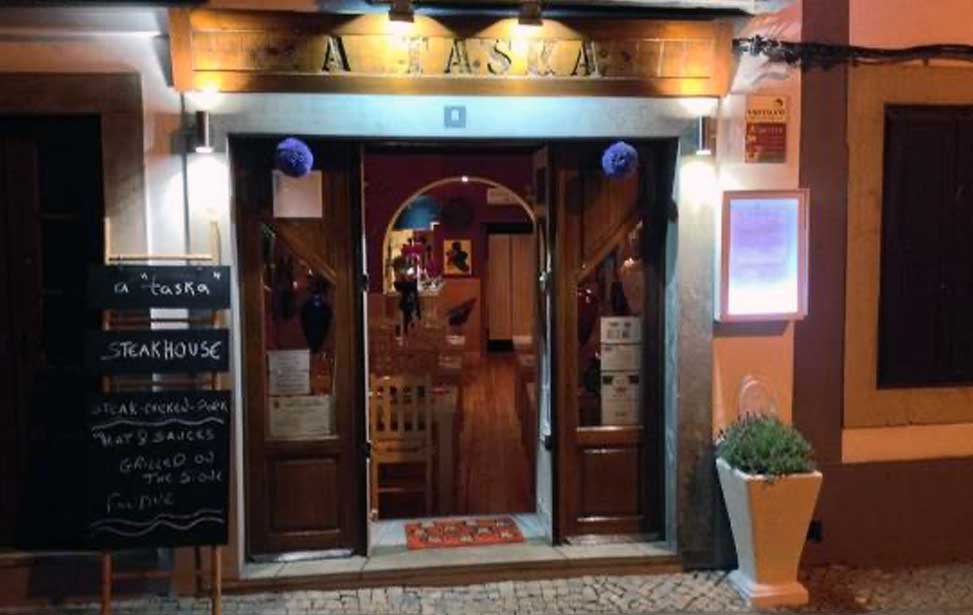 taying in a town full of good fish restaurants after a while one could be forgiven for having a craving for meat, A Taska then should be your place of choice. This small restaurant is a little quirky yet nicely decorated. From within the novelty menus choose from sirloin steak, pork chops and chicken and then choose which sauce you wish it served with. The food arrives well presented with the same in-house quirky style. All in all a great night out you'll certainly remember and quite possibly repeat. 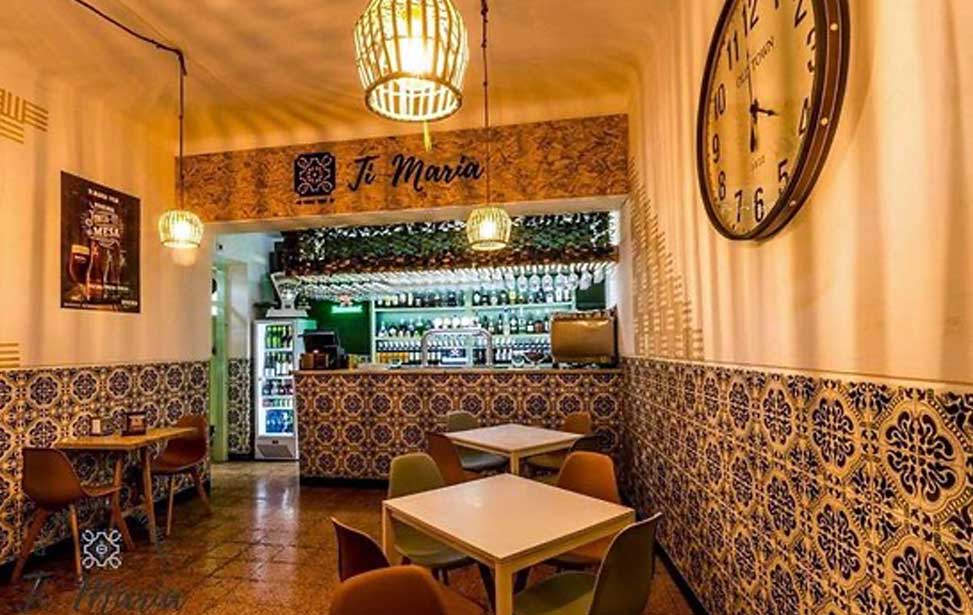 Tapas and small dishes are the mainstay here, each lovingly prepared for your delight. A fantastic option for a light lunch or to spend a couple of hours sampling the best cuisine the area has to offer.