Often referred to as the Garden Town, Mirandela sits on the right bank of the Tua River 66km (40 miles) east of Vila Real. It's said when people see Mirandela, they inevitably want to stay. Famed for the pedestrianised Roman bridge straddling the river and jet skiing – Mirandela hosted the world championships in 2004. Mirandela is also well known for its regional cuisine, most notably the traditional "Alheiras" sausages. At the end of July, festivals are held in honour of Nossa Senhora do Amparo and characterised by an awe-inspiring candlelit procession and a magnificent firework display. 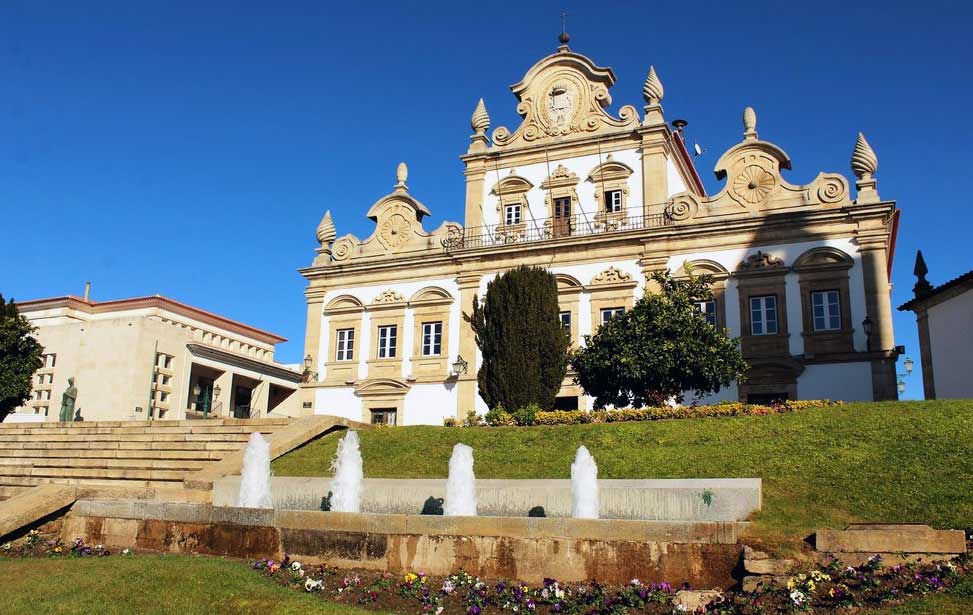 During the Roman occupation of the area, Mirandela was heavily populated due to the fertility of the land. The town was once enclosed within defensive walls dating back to the 13th century and was one of the finest castles found in the Trás os Montes region. Following the expansion of Portuguese territory, Mirandela's strategic status diminished. Amongst the few remnants of the castle is the Porta de Santo António. This roman arched gateway faces west towards the Tua River. Originally it would have been the main gate of the castle. In May 2000, a plaque was erected on the keystone to mark the 750 anniversary of the towns elevation.

Mirandela has retained much of its medieval centre, although being encroached slightly by the modern world. A former 18th-century palace, the Paço dos Távoras, is now the town hall. Its impressive granite Baroque facade dominates the square it's situated in. It's one of several exuberant Baroque townhouses associated with the Távora family, who controlled Mirandela between the fourteenth and seventeenth centuries.

There's a fine municipal market held each Thursday and is a great place to purchase local produce, delicacies and even a souvenir to take back home. Down by the riverside, there are some gardens and lawns and are pleasant places to chill out. It's also possible to hire kayaks or a pedalo. There is also a river beach where you can take a dip in the Tua River.

Mirandela's beautiful bridge spans the river where once stood a Roman crossing. What you see today dates from the 15th and 16th centuries. There's been many repairs and alterations over the centuries. Most recently in 1910 after four arches were washed away by floods. There were replaced by two wider ones. The remaining eighteen asymmetrical arches span over 200 metres across the River Tua. For most of its existence, the bridge was the only way to enter the town of Mirandela. It was originally conceived to allow rapid troop movement and allow precious ore from local mines to enter the town. New granite flagstones have been laid to replace the concrete road surface and gaslights added to create a majestic ambience in the evenings. The Medieval bridge today only allows pedestrian traffic to traverse the river and makes an idyllic, if not romantic, sightseeing stroll. Mirandela's Medieval Bridge is one of two National Monuments of the town. 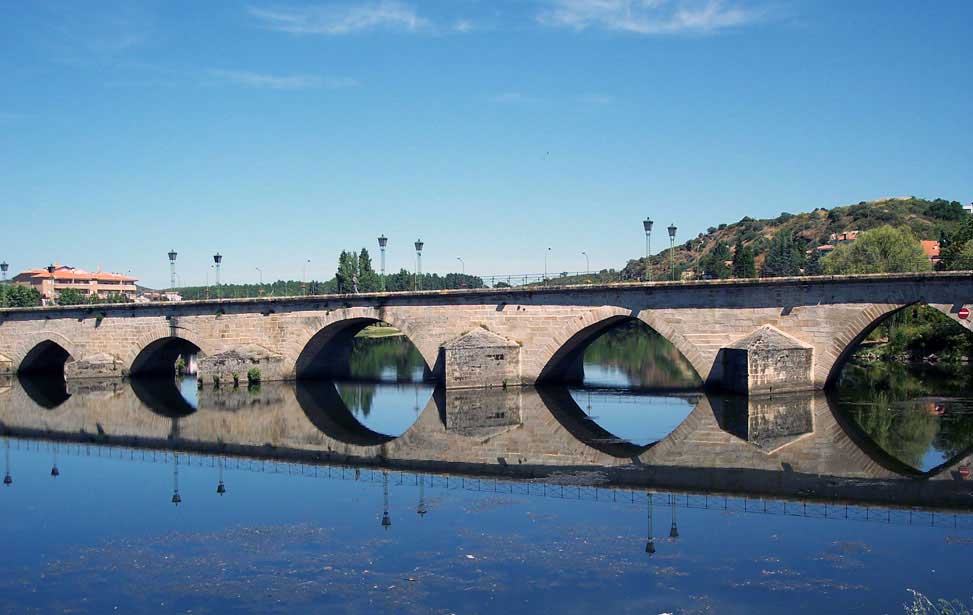 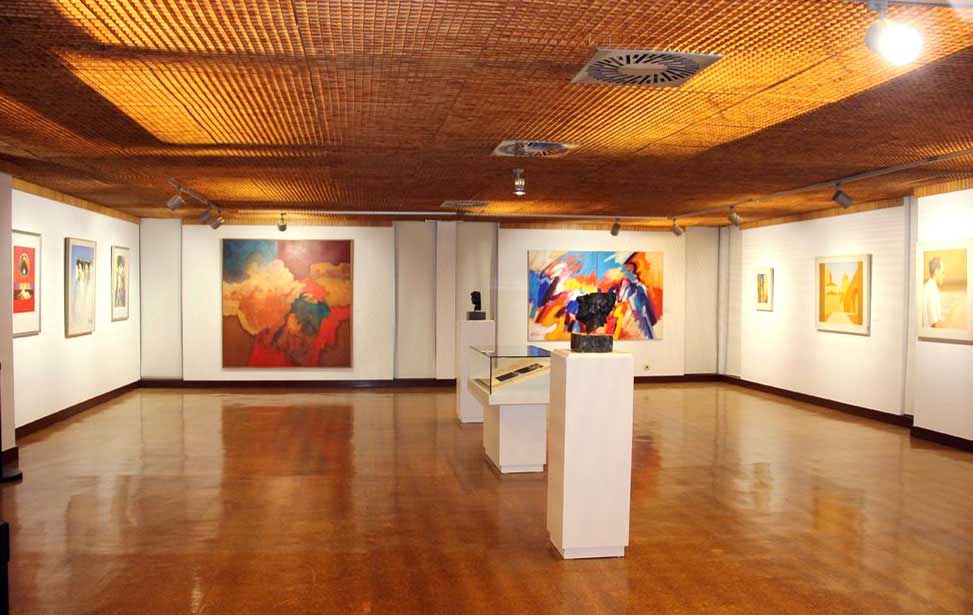 This 20th-century painter Armindo Teixeira Lopes was born in Mirandela. Following his death in 1976, his two sons donated a selection of his work to the town. By 1981 the collection had become large enough to warrant the creation of a dedicated museum located in the centre of Mirandela. Since it opened, the museum has acquired works by many other Portuguese 20th-century and contemporary artists, including João Hogan, Graça Morais, Nadir Afonso and Júlio Pomar. Over 500 pieces of art are contained within the museum. Encompassing disciplines such as painting, photography, prints, sculpture, drawing and engraving from the 1800s to the 21st century. 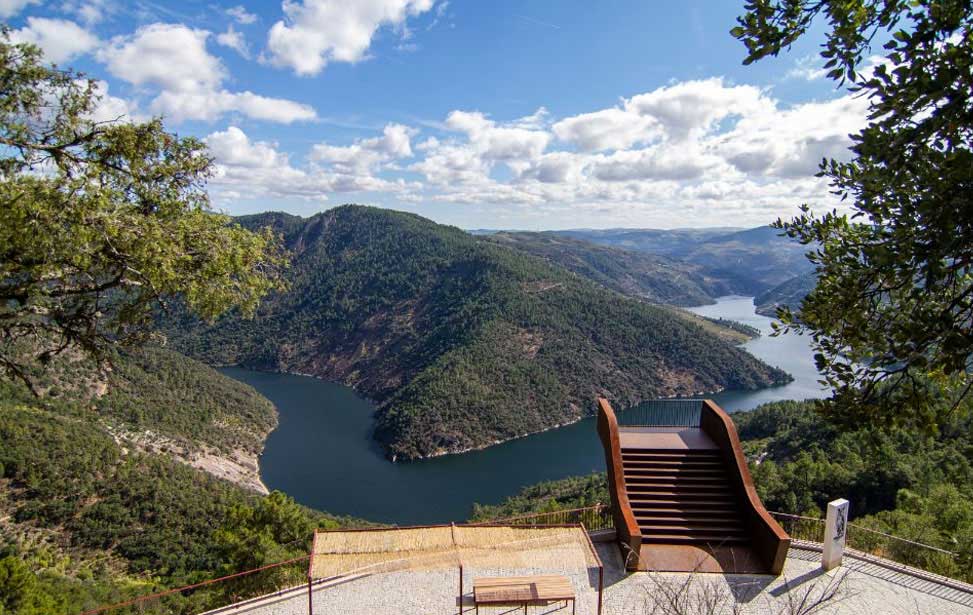 There's a new National Park southwest of Mirandela town between the districts of Vila Real and Bragança. It integrates the municipalities of Alijó, Murça (right bank of the Tua river), Vila Flor, Carrazeda de Ansiães (left bank of the Tua river) and Mirandela. It was established in 2013 to preserve the wildlife and scenery in the Tua Valley. Millions have been invested in this 25,000-hectare area to prevent devastating forest fires and allow safe access across a network of footpaths and trails.

Marvel at the dramatic gorge and steep valley sides where the torrent waters of the River Tua have sliced their way through the bedrock. The wildlife found here includes 15 fish species, 20 reptiles, and 29 mammal species. There are also 14 types of bats and over 120 species of birds. The fauna is equally diverse. 700 species of vascular flora and trees include trees such as boxwood, maples and Portuguese oaks.

Olives and olive oil production has been the mainstay of the local economy for centuries. It is this industry the museum is dedicated to. Housed within a former mill the museum's focus is the history and cultural impact fine olive oil has had on Mirandela's fortunes. The museum was designed by Architect Graça Dias and housed in the old Mirandelense's Milling facilities. Following a long period of construction, it opened its doors to the public in 2014. Within the museum one can find a mill room, an olive tree yard, a field and fruit Room, olive grove sounds, an olive processing and labouring room, olive oil and its uses room, a gallery of temporary exhibitions and an auditorium. There’s an ancient millstone in the central pavilion, and video projections detail the biology and natural history of this ancient plant.

In addition to being an interesting insight into the olive oil production industry, there's also the obligatory gift shop where you'll have the opportunity to purchase some Azeite de Trás-os-Montes olive oil which has DOP status. The area is one of six DOPs in Portugal and the country’s second-largest area of olive oil production. Typically the oils are very refined and complex with a scent of spices, almonds and other dried fruit. 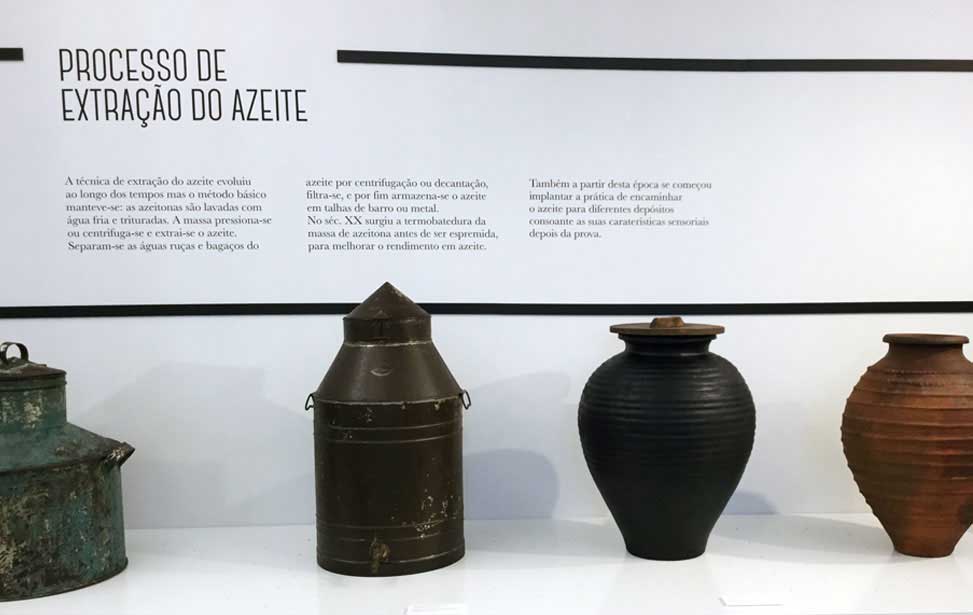 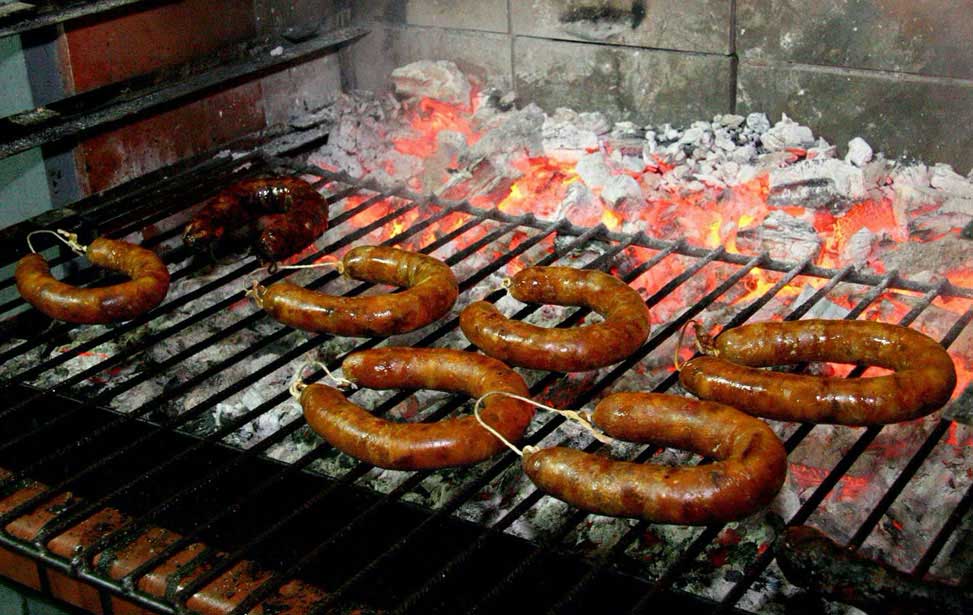 One of the best attractions of Mirandela and the surrounding area is the cuisine. Mirandela is known for the Alheira smoked sausage, which can be eaten hot or cold or added to the array of stews the region offers. Its name is derived from the Portuguese word Alho, meaning “garlic”. Originally the sausage was mainly made from poultry and game. During the time of the inquisition, the Jewish population were forced to convert to Christianity but as a defiant gesture, they still refused to eat pork and devised this tasty delicious delicacy. The Alheira from Mirandela has an IGP certification (“Product of Geographic Indication”) and is bound to strict regulations.

Situated in the heart of Mirandela, Grande Hotel Dom Dinis offers views over the Tua River. It features an outdoor pool and free private parking on site. Each room is air-conditioned and offers a TV. Some have a scenic view overlooking the river. Guests can spend the day exploring picturesque Mirandela or some of the other small villages in the district of Bragança. Hotel Dom Dinis offers a 24-hour front desk and free private parking on site. Regional and international food is served in the hotel’s restaurant. Guests can enjoy refreshing drinks at the bar. 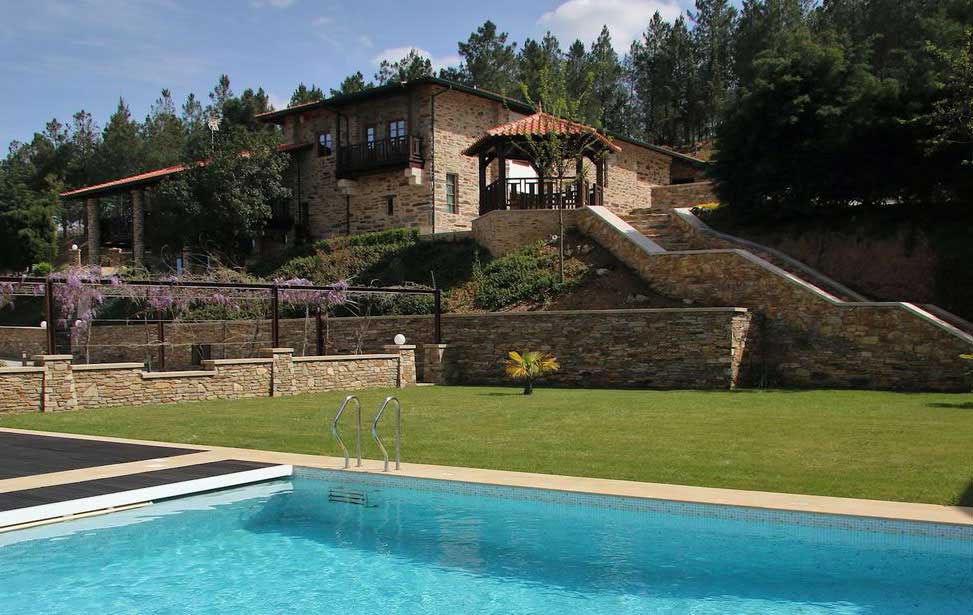 Boasting a swimming pool, a shared lounge, a garden and views of the garden, O Casario is situated in Mirandela and features accommodation with free WiFi. The bed and breakfast offer a flat-screen TV and a private bathroom with a hairdryer, free toiletries and a shower. Continental and buffet breakfast options are available each morning at O Casario. The accommodation offers a sun terrace. Guests at O Casario can enjoy billiards on site, or go hiking or cycling in the surroundings. 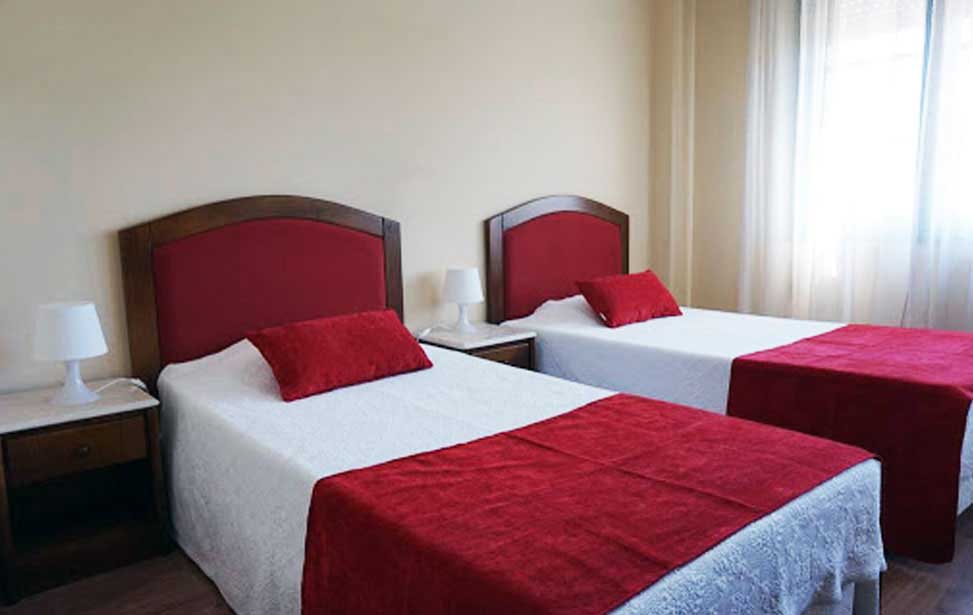 Set in Mirandela, Comfort Tua offers free WiFi and river views, 450 yards from Mirandela Medieval Bridge. The units have parquet floors and include a seating area with cable TV, a fully equipped kitchen with a dining area and a shared bathroom. A microwave, a fridge and an oven are also offered, as well as a kettle. Guests at the apartment can enjoy tennis on-site, or go hiking or cycling in the surroundings. 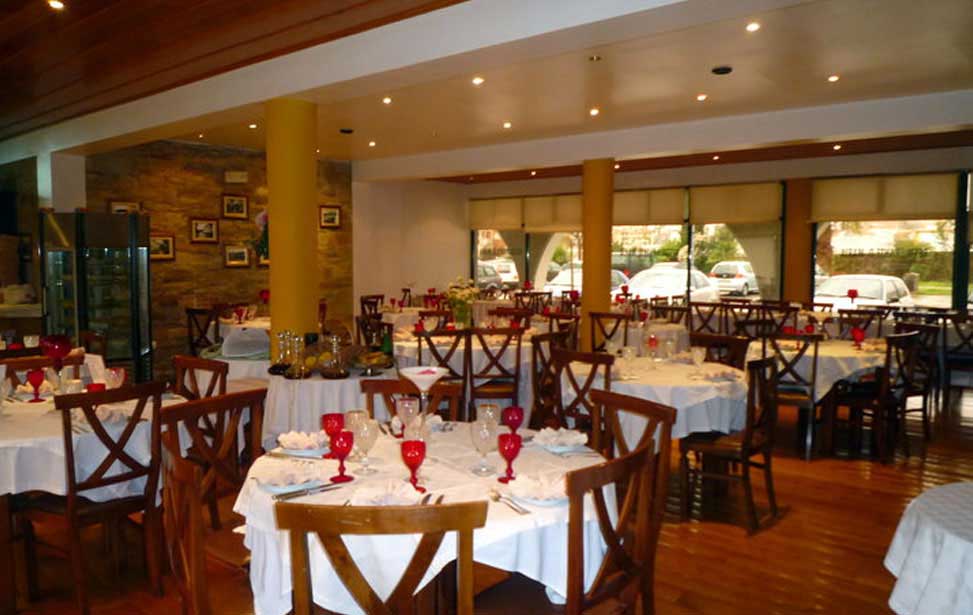 Very much a locals establishment, those who appreciate good local fare take a walk across the bridge to the Restaurante Dona Maria. If you're keen to try the renowned Alheira sausage this would be a good choice. Other Transmontana specialities are on offer here and prices reflect the non-touristy location. The decor is stylish yet the atmosphere feels homely thanks to the welcoming and friendly staff. 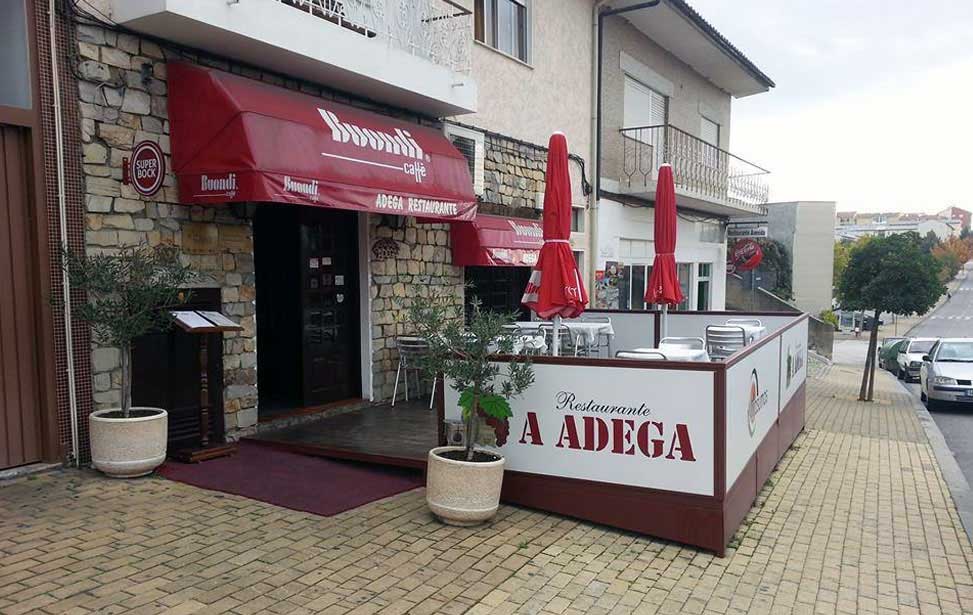 A warm welcoming dining environment where you can enjoy excellent local cuisine in comfort and have it served by friendly staff. It probably the best restaurant in the area to try Posta Miranesa, a local veal dish or an Alheira smoked sausage. Prices are reasonable enough and if you have room try one of their great desserts. 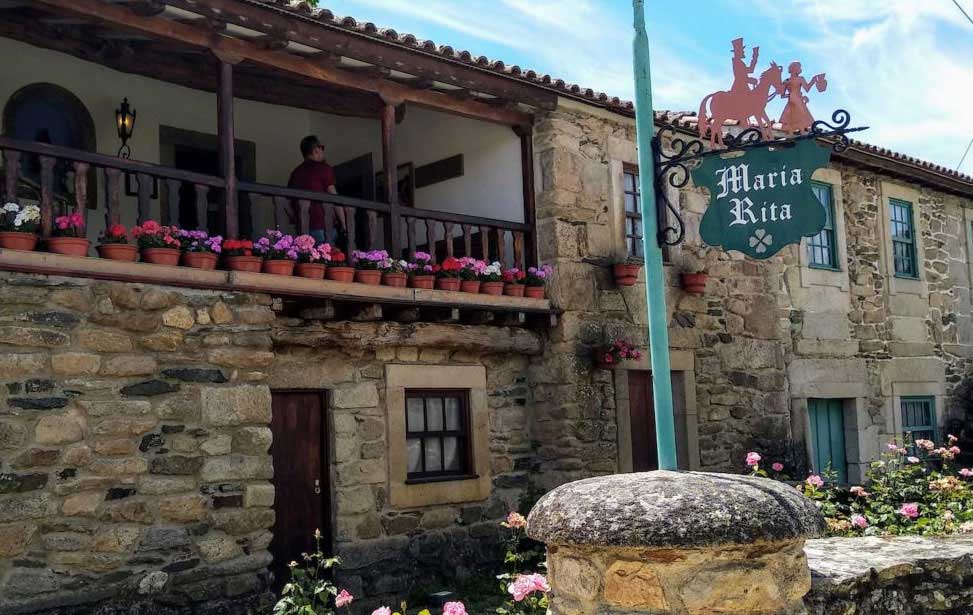 This fabulous restaurant is part of the Menéres Family Estate which produce olive oil and wine on their estate. Following their organic ethos, the food cooked on their chargrill is locally sourced and naturally produced. The restaurant has an idyllic location within the village of Romeu inside a restored ancient building, bursting with character and charm. Staff are typically warm and friendly who will make sure you'll leave satisfied and full. Food is cooked with their own Olive Oil and accompanied by wines made in their Quinta. A truly unique dining experience.