Covilhã is a mountainous town located in the foothills of the Serra da Estrela between the river streams of Carpinteira and Goldra. Vestiges of the 12th-century town walls can still be seen in some areas. Most of the architecture found in Covilhã’ dates to its heyday when it was the heart of a thriving woollen industry. The region has a long history of wool production dating back to Lusitanian shepherds who worked this land before the Romans came. The role the city had as Portugal's main textile producer began with the large Jewish community in the middle ages. Following the opening up of trade routes to the far-east in the 16th century, the production methods and styles began to reflect more oriental influences. In 1681, D. Pedro II, Count of Ericeira, opened the Factory-School on the banks of the river Carpinteira, the ancient Fábrica d’el Rei D. Sebastião, later called “Fábrica Velha”.

The old town is blessed with narrow streets and Manueline windows, the Chapel of São Martinho, the Chapel of Santa Cruz and the Wool Museum. Here too you can find the Jewish quarter or "Judiaria". Covilhã is now a pleasant base for winter skiing and summer hiking in the Parque Natural da Serra da Estrela.

One of the city’s most famous sons was the famous Pêro de Covilhã. He was commissioned by João II in 1487 to explore the lands of Western India and as a consequence paved the way for Vasco de Gama's later voyage. 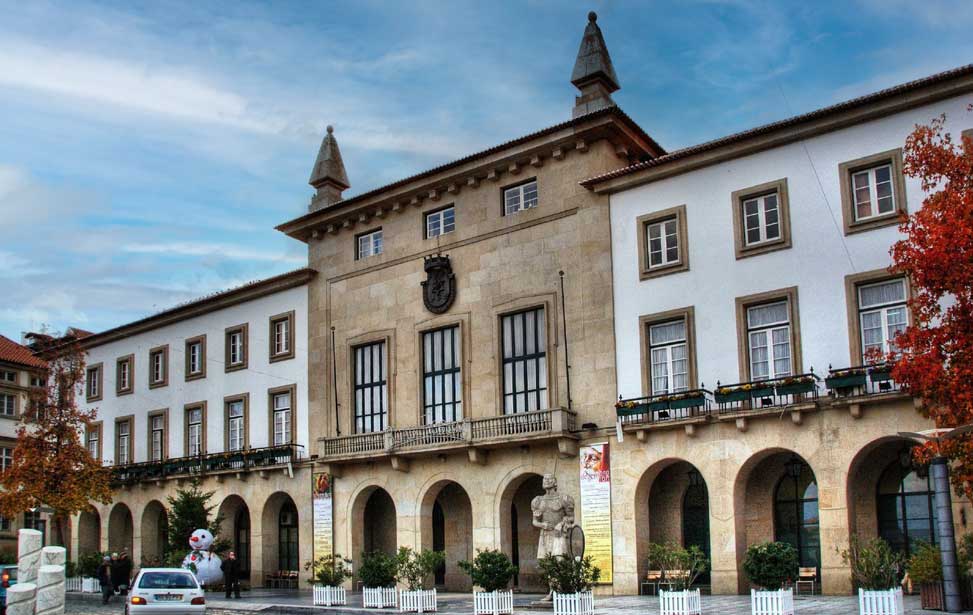 The town was granted royal status by Dom Manuel, who gave it a new charter in 1510, and it was also a land of discoverers. Prince Henry the Navigator was given the title Lord of Covilhã by his father, King Dom João I, after conquering Ceuta in 1415. The oldest part of town occupies the high ground a brisk climb up from the bus and railway station. The walk to the old town centre will take you past the Universidade de Beira Interior and the Museu de Lanificios. The heart of the old town is the Praça do Municipio where urban buses terminate, including those with services to the bus station. Standing in front of the city hall is a statue of Pêro de Covilhã whose quest to locate the legendary Prester John in Ethiopia in 1487 ended in tragedy. The Museu de Arte e Cultura is located close by and exhibits both modern and classical Portuguese art.

The little Romanesque chapel of São Martinho was built in the 12th or 13th Century and is Covilhã's oldest church. Through the double-arched semi-circular portal one finds stylised capitals with their vegetable motifs, traces of fresco painting with representations of holy figures on the altar tables, suggesting medieval decoration, and the Hispano-Arabesque azulejo tiles laid down in the 16th century. Here too are two precious panel paintings, representing St Christopher and St Lawrence, which belong to the treasury of the Chapel of São Martinho.
Rua Marquês de Ávila e Bolama 44, Covilhã, Portugal. | 40° 16' 40.4" N | 07° 30' 28.4" W

Behind the Praça do Municipio is a flight of steps that leads to a small square that contains the 16th-century Igreja de Santa Maria church. The ornate azulejos tiles that cover its façade were added in the 1940s. The tiles depict various scenes from the life of the Virgin Mary, the patron of the church. The church itself dates back to the 16th-Century when it was known as the Capela de Santa Maria do Castelo. Following reconstruction work between 1872 to 1876 the church obtains a Baroque appearance.

Inside the single nave, you can find a few paintings by São Francisco de Sales and Santa Teresa de Jesus, as well as the Relic of the Holy Cross, donated to the Chapel of Santa Cruz by Dom Luís. There are eleven altars, five of which are dedicated to the Virgin Mary.

The buildings in close proximity to the church had received a more contemporary makeover and sport some controversial murals. At least the colours match the church. 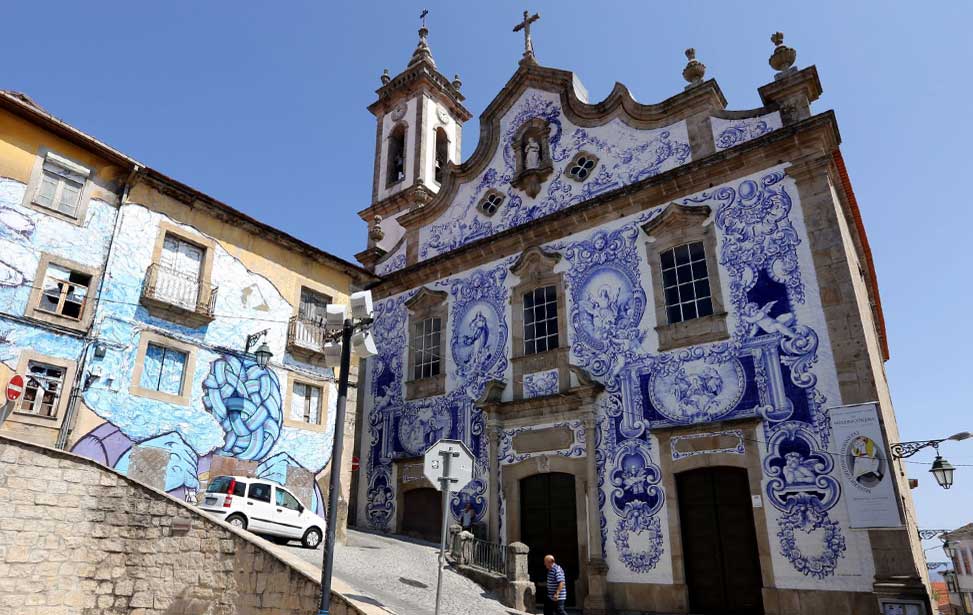 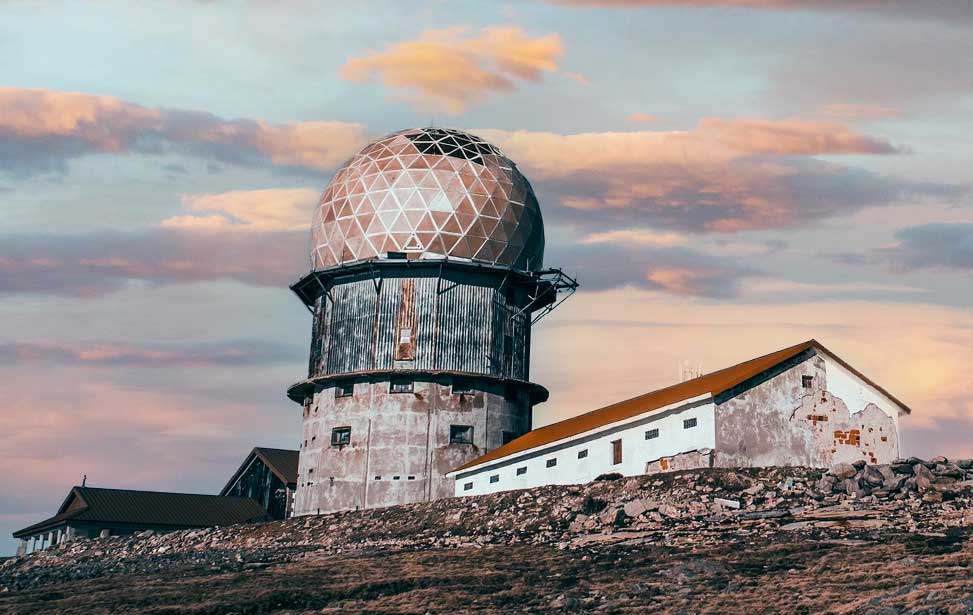 The Serra da Estrela is Portugal's highest mountain and offers visitors clean air, crystalline streams and an abundance of fauna. The slopes of the foothills make ideal pasture lands for sheep and goats. The highest peaks receive snow each year and are a playground for winter sports. Covilhã sits in the shadow of the Serra da Estrela within an ancient glacial valley and makes an ideal base for exploring the region.

The highest summit in the range is called Torre and stands at an elevation of two kilometres above sea level. The name Torre refers to the seven-metre tall tower built on the order from King João V in 1816 so that the official height can be exactly 2,000m.

The towns famous wool museum is housed inside the former Real Fabrica de Panos (Royal Textile Factory), which dates back to the 17th-Century after being established by the Marquis of Pombal. The mill was powered by the area's mountain streams. The museum was founded in 1982 and in three separate departments covers all the processes involved in the regions textile industry. The Royal Textile Factory Nuclei focuses on the period before the industrialisation of the wool production (18th-Century), the Veiga Royal Factory/Wool Interpretation Centre with valences of the Wool Industrialisation Museum Nuclei (19th and 20th centuries) and the Documentation/Wool Historical Archive Centre, and also the Râmolas de Sol, an open-air space made up of a set of sun strips used for drying and drawing wool fabrics outdoors, after passing through washers, floors or dyes, and a drying rack to spread and dry the wool in the sun, after washing.

Next to the Real Fabrica de Panos is the Real Fábrica Veiga, once the headquarters of an 18th-Century wool company and now an interpretation. centre. This establishment was involved in the dyeing of cloth. In addition to the old factories, you can see a wide collection of machines, equipment, fittings, textile products (wool, strings, textile samples, fabrics and garments).
Tuesday to Sunday: 09h30 - 12h00/14h30 – 18:00. Monday: CLOSED 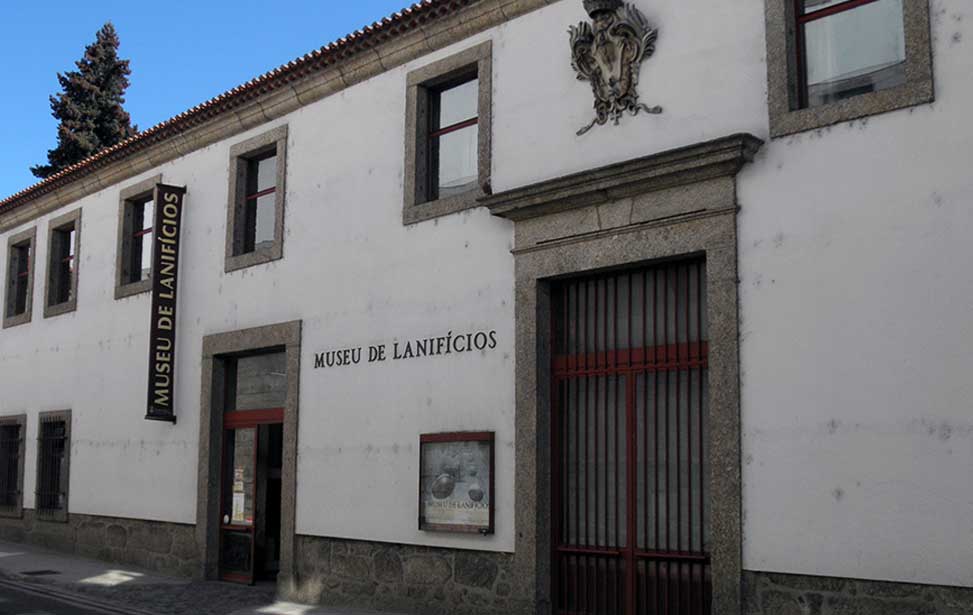 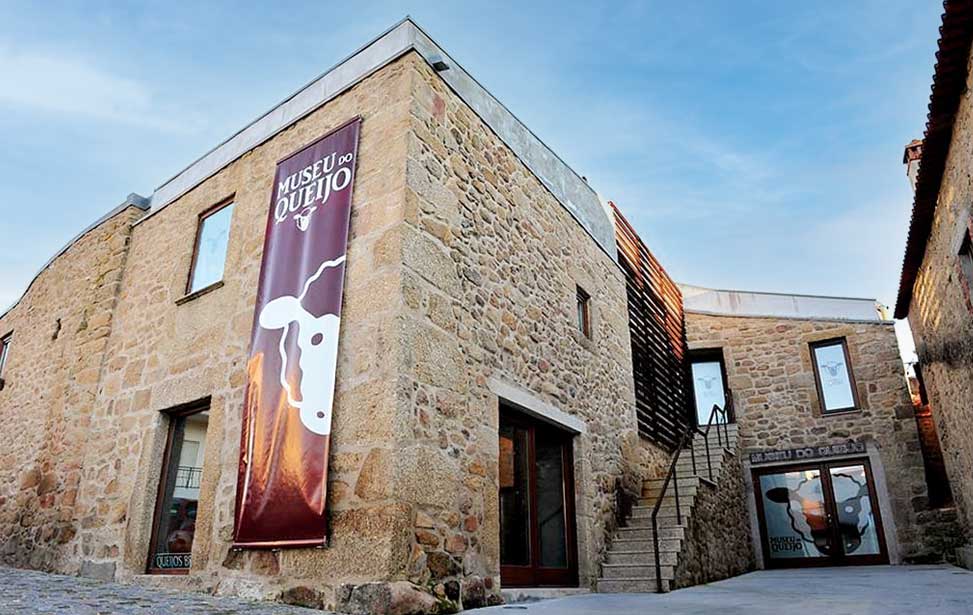 In the sleepy village of Pêraboa, 14km from Covilhã is the museum dedicated to one of the region's best loved products – Queijo de Serra da Estrela. The perfect pasture lands in the area are ideal for sheep farming that not only support the regions wool industry but also produces one of the finest cheeses you'll ever encounter. Within the Museu do Queijo you'll discover the long history of cheese making in the mountains, its legacy, history and heritage, manufacturing techniques as well as enjoying tasting the cheeses. As soon as you enter the museum your senses are bombarded by the aromas of the various cheeses.

Through the use of various types of media, you will about the age-old shepherd traditions that have survived centuries. See how ancient methods are still used to curdle the milk and make the delightful wheels of cheese. The end result is what is fondly known as the king of Portuguese cheese. Queijo de Serra da Estrela is prized for its soft rich texture with distinct nutty and intense flavours. During the spring months, you can even participate in milking the ewes and pressing the cheeses into moulds. 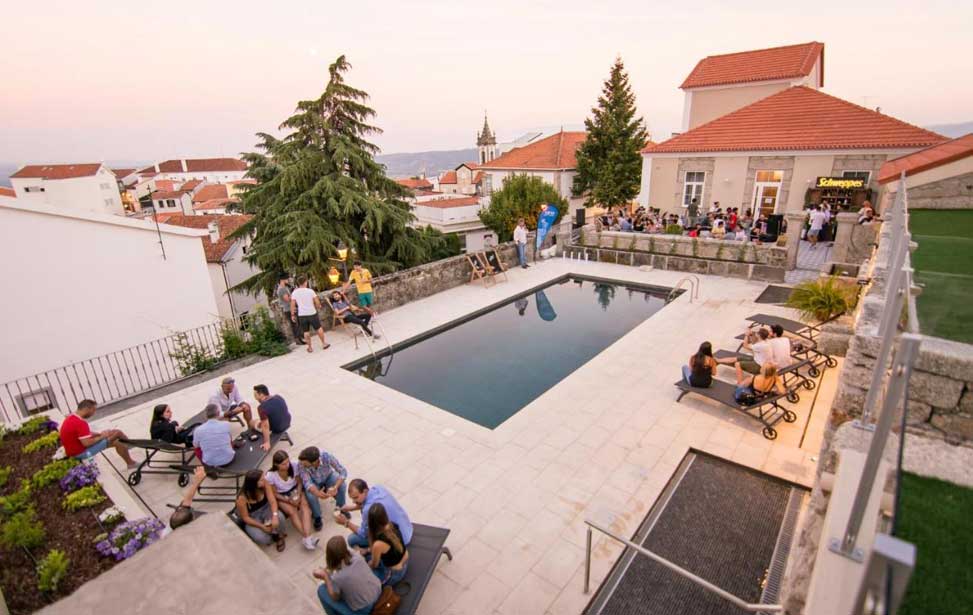 Casa das Muralhas features a restaurant, a seasonal outdoor swimming pool, a bar and a shared lounge in Covilhã. 12km from Parque Natural Serra da Estrela, the property features a garden and a terrace. The accommodation offers room service and free WiFi throughout the property. At the hotel, every room includes a desk, a flat-screen TV, a private bathroom, bed linen and towels. Guests at Casa das Muralhas can enjoy a continental or a buffet breakfast. 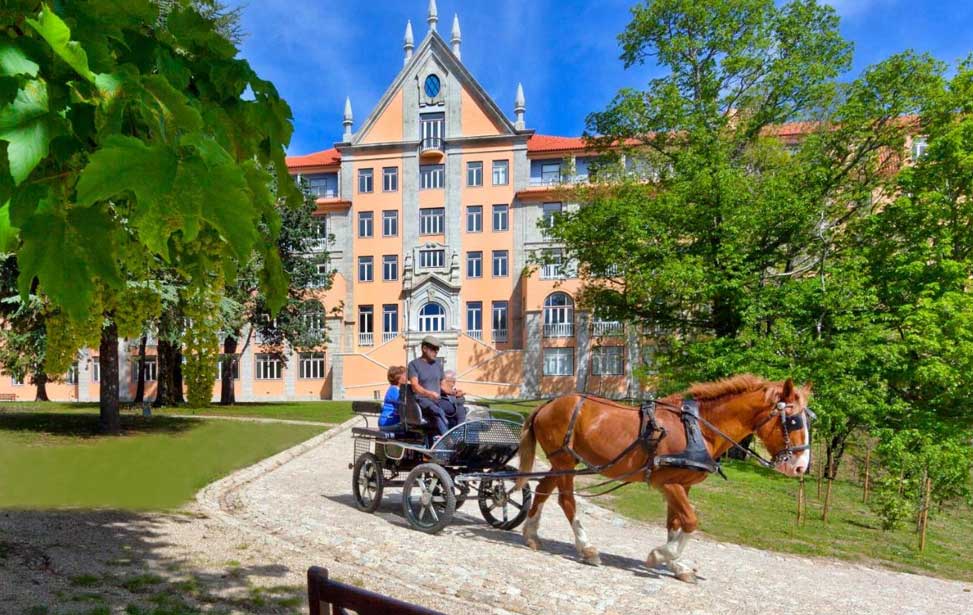 Offering an outdoor and an indoor pool, Pousada da Serra da Estrela is located in Covilhã. Featuring panoramic views of the surrounding landscape this hotel provides free WiFi access. Rooms provide guests with a flat-screen TV, air conditioning and a minibar. Featuring a bath and shower, private bathrooms also come with a hairdryer. Extras include a desk, a safety deposit box and linen. Guests can enjoy their breakfast in the room. In addition, an à la carte restaurant with a varied menu is available. A bar is also available where guests can relax while enjoying a beverage.

At Pousada da Serra da Estrela guests will find a spa, a wellness centre and a fitness centre. Other facilities offered include a shared lounge, a games room and luggage storage. An array of activities can be enjoyed on-site or in the surroundings, including skiing. The property offers free parking. 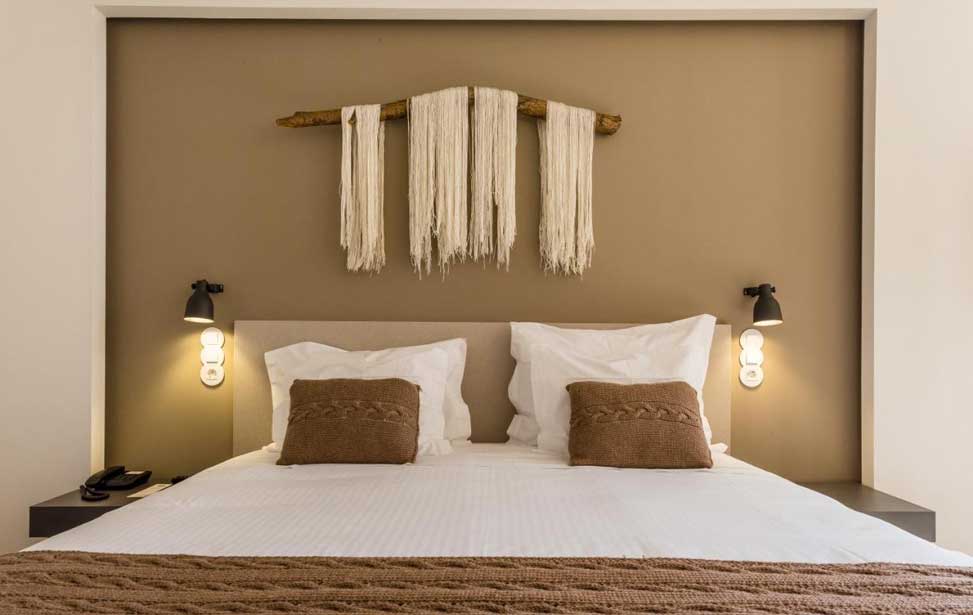 Puralã - Wool Valley Hotel & Spa offers air-conditioned rooms and a buffet-style breakfast. It features Nature Club and Spa which offer various beauty treatments and massage therapies. Puralã offers suites and rooms which have en-suite bathrooms. Some rooms have a private spa bath. Guests can enjoy à la carte dishes or a complete buffet at the hotel’s restaurant. Leisure facilities include indoor and outdoor swimming pools with seating areas along the side. The hotel also has a kid’s club. 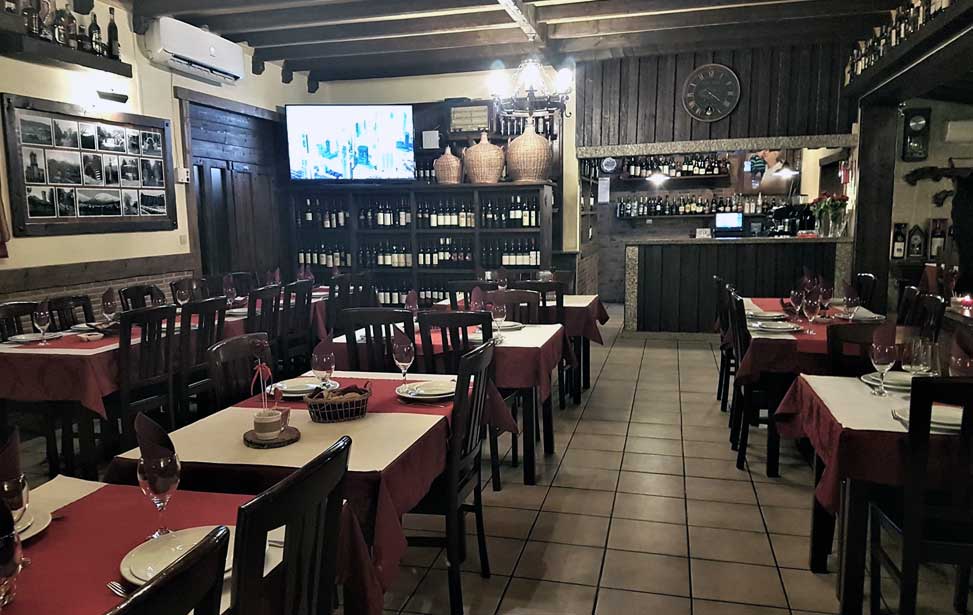 Tucked away off the beaten track in a small village called Paul, this family run restaurant is well worth the detour if in the area. Using the best produce the region provides the food here is as local as local can be. Cooked in the traditional way to a high standard and served with a friendly welcome. The portions are very generous especially when you take into account the reasonable prices. Restaurante O Helder is very popular with local people, that has to be the best recommendation a restaurant can have. 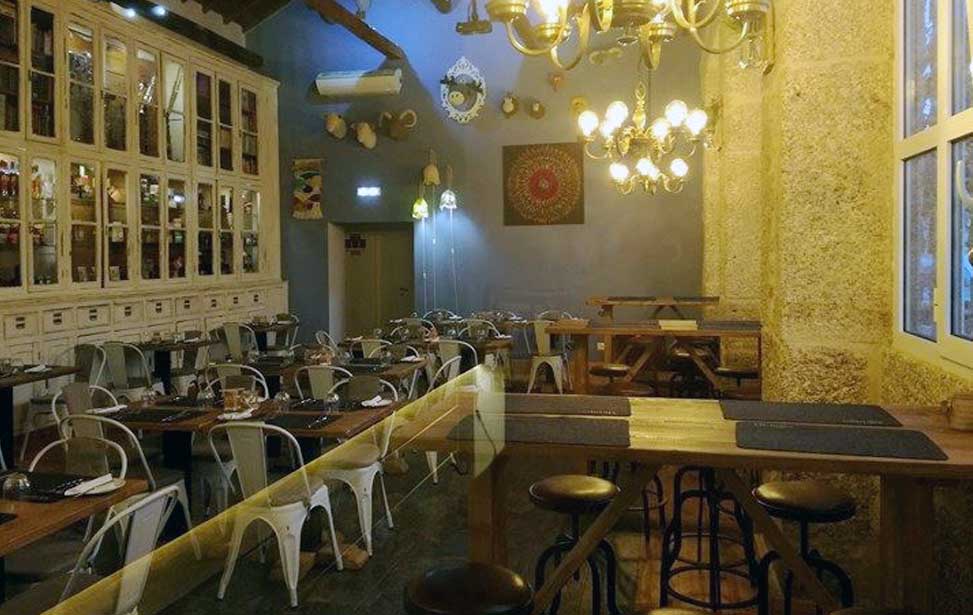 Traditional Beiras dishes receive a creative contemporary reinvention. The decor is bright, clean and quirky. However the service is good old fashioned jovial-polite. 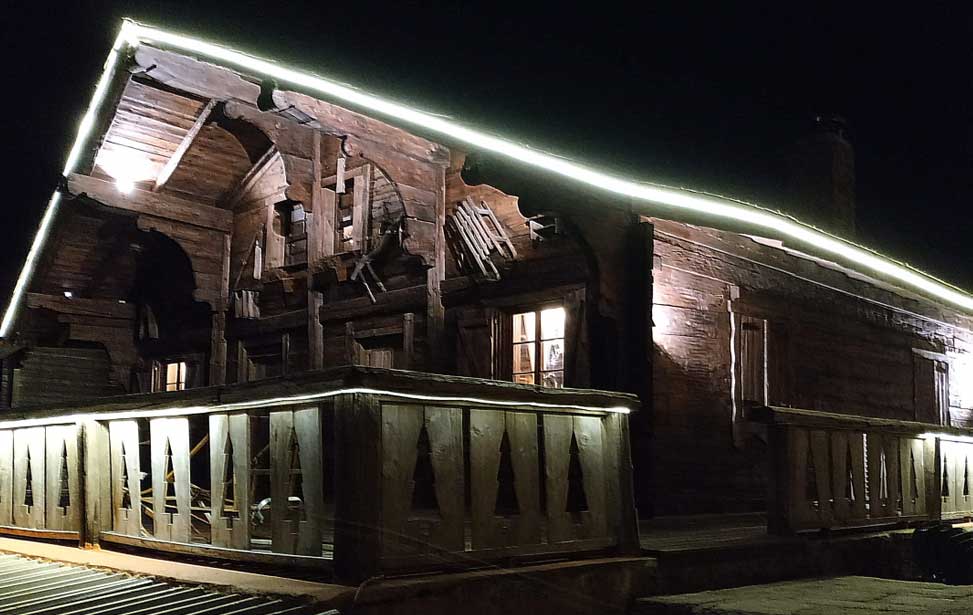 The views the restaurant is well worth the trek out of Covilhã up a winding road. Here you will encounter great local produce prepared and served perfectly. The staff are very friendly and take joy from helping their patrons.