The Parque Natural do Douro Internacional covers a long strip of land that follows the western bank of the River Douro which forms the border between Spain and Portugal. The area has a special Mediterranean microclimate which has warmer winters than other areas in the Trás os Montes region. This in combination with the sparse human population of the area has led to the survival of several animal and plant species that are now extinct in the other regions of Portugal. 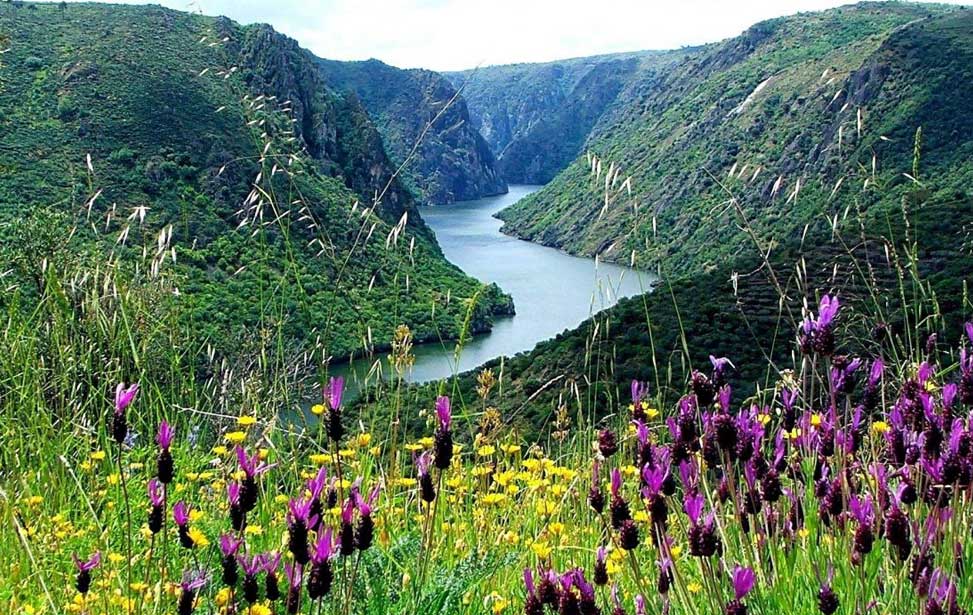 Beginning at the ancient town of Miranda do Douro in the north, the park Parque Natural do Douro Internacional covers an expansive swathe of land hugging the West Bank of the Douro River, following the border with Spain. 122km to the South the park ends at Barca d’Alva where the Douro officially enters Portugal territory. The Douro Internacional Natural Park covers part of the Portuguese municipalities of Miranda do Douro, Mogadouro and Freixo de Espada à Cinta. On the Spanish side of the border, this protected area continues as the Parque Natural de Arribes del Duero.

Geographically the park has two distinct regions; the upper Douro region has a distinct Mediterranean microclimate whereas the lower regions are more mountainous with a harsher climate, thus earning it the name Terra Fria. During February and March, the land is enveloped in light pink as the region's almond trees come into blossom.

A local legend describes the origins of the numerous almond trees. A young Moorish prince married a princess from Northern Europe and brought her to live in the area. During the summer months, the princess was happy enough yet during the winter she longed for the snow which covered her mountainous homeland. Eager to appease his wife the prince had almond trees transplanted from the Algarve so once a year the princess could see the land covered in white.

The towns/cities of Miranda do Douro, Mogadouro, Freixo de Espada à Cinta and Figueira de Castelo Rodrigo lie on the fringes of the park and make great base when visiting the Parque Natural do Douro Internacional.

The ancient town of Miranda do Douro sits high on a hill overlooking the cavernous valley of the river Douro on the northeast border of Portugal. The region is remote, sparsely populated and seemingly lost in time. Ancient customs and handicrafts, such as weaving and pottery are preserved here with immense pride. The "Língua Charra" dialect, indigenous to Trás os Montes and Alto Douro regions, is widely spoken here, known locally as Mirandese (Mirandês). This vulgar Latin language possibly originates directly from the Roman occupation of the area. In 1999, the Mirandese dialect was officially recognised by the Government as Portugal's second language and is now taught in schools across the Trás os Monte region.
[ More About ► ] 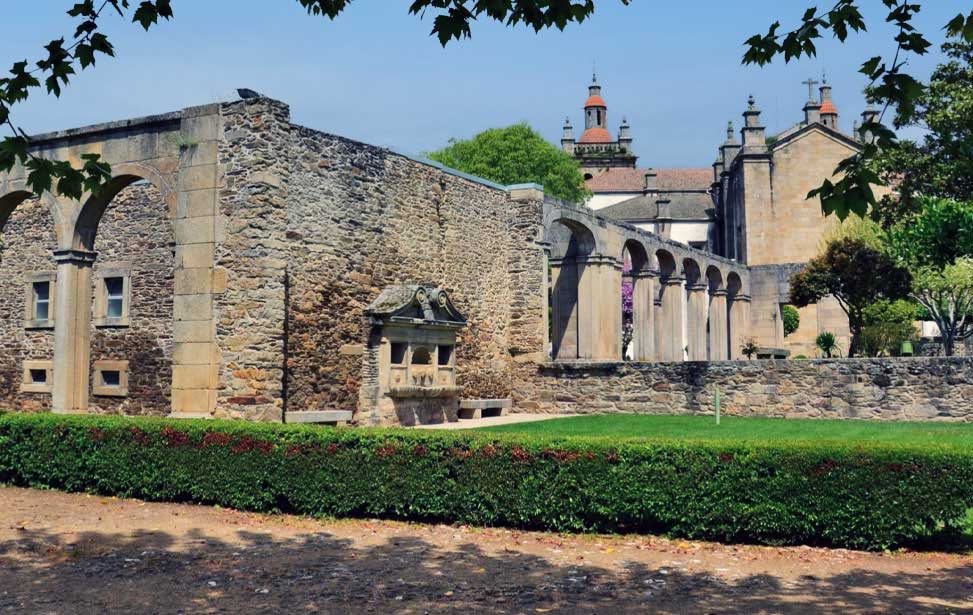 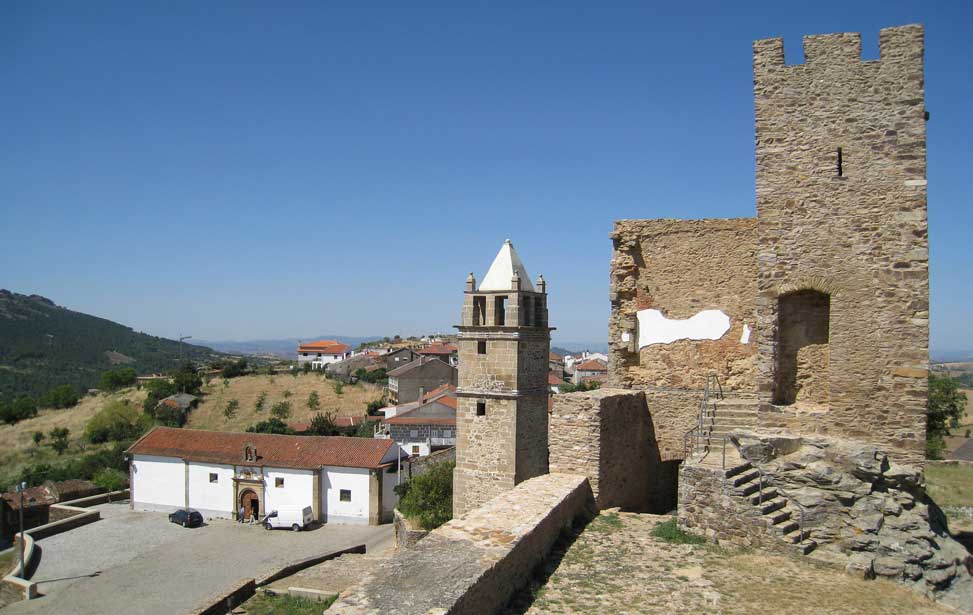 Mogadouro became part of the expanding Portuguese kingdom in the 13th century after it was wrestled from the Moors. The job of defending this newly gained land was given to the Order of the Knights Templar who soon set about constructing defences, including the town's castle. To the east, the land rises, the Parque Natural do Douro Internacional, where the young Douro River flows to form the border with Spain. The surrounding undulating landscapes are beautifully rugged and agricultural. In early spring, almond trees bloom and the fields turn white with blossom. As part of the Mirandese Plateau, the land rises to an average height of 700m above sea level.
[ More About ► ]

The town dates back to the time of Alfonso Henriques, Portugal's first King, who built upon the original ancient defensive works. The town became a centre of trade between the old kingdoms of León and Castile before becoming part of the newly formed country of Portugal.

There's some contention about the origin of this beautiful town's name, which oddly literally translates as "a sword strapped to an ash tree with a belt". Indeed outside the town's parish church, you'll find exactly that. Some believe this is derived from the heraldic symbol that belonged to the town's founder. Other myths include a story of a Leonese nobleman called Espadacinta who, after doing battle against the moors, rested under an ash tree where he tied his sword. Another legend attributes the sword to King Dinis, who rested here after warring with his illegitimate son Afonso Sanches in the 14th century.

The equally odd-named Tower of the Rooster (Torre do Galo) is a remnant of the 13th-century fortress which once stood here and still dominates the landscape. Only a small scattering of the ramparts still stand. The gothic castle walls are long gone but the 25 metres (82 ft) high irregular heptagonal keep has been preserved and renovated. Accessed through a small door, the interior is divided into three floors connected by a dimly lit staircase. A climb to the top will reward you with stunning panoramic views over the surrounding countryside.
Daily: 08h00 – 17h00 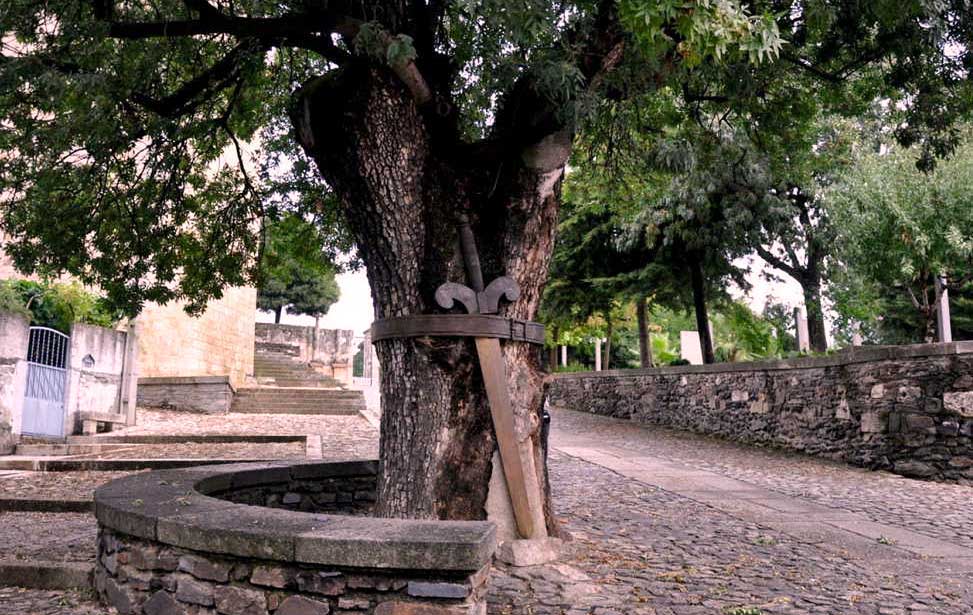 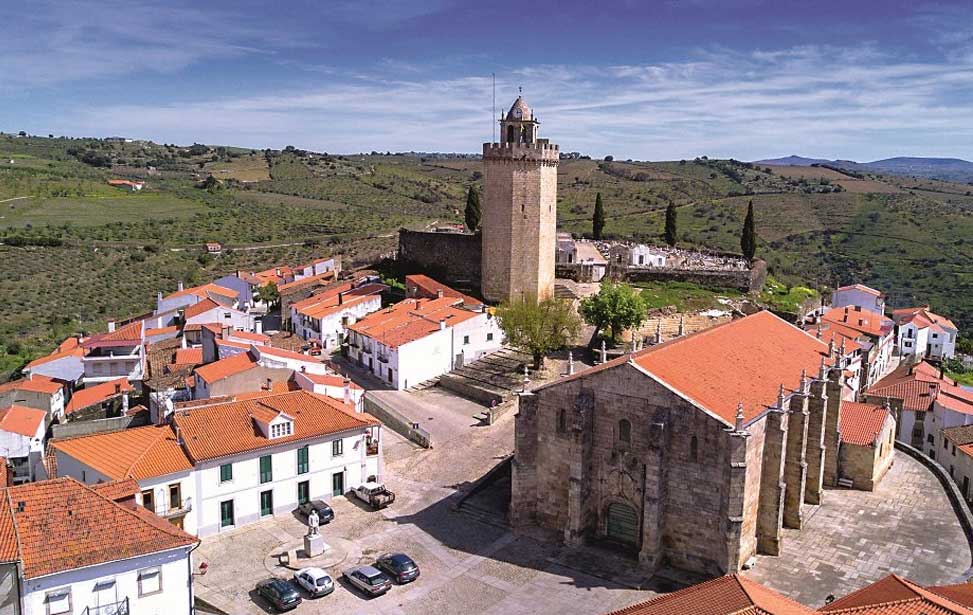 Church of São Miguel de Freixo de Espada à Cinta
Construction of this fine Late Gothic church began during the reign of King Manuel I and incorporates the architectural style which bears his name – Manueline. Work was completed by his son Jõao III when the vault was added. Although it's uncertain who the architect was, it is commonly agreed the building is a masterpiece. Of special note are the intricately carved portals.

The Manueline style can also be found in the buildings which make up the medieval old town. Within the warren of narrow streets, the dwellings are decorated with finely carved window frames and doorways. During the 16th century, there was a large Jewish community here with several fine stonemasons and artisans amongst them. Their mason's marks can still be seen carved into their work around town.

Miradouro de Penedo Durão
A ten minute drive south from Freixo de Espada à Cinta is the Miradouro de Penedo Durão view point which overlooks the Douro gorge. The amazing vistas here are well worth stopping for. It is here too you'll have the best chance of spotting birds of prey, especially at sunset when they return to their nests to roost. There's plenty of seating, picnic tables and shaded areas to keep the whole family happy.

TOP TOURS IN THE DOURO 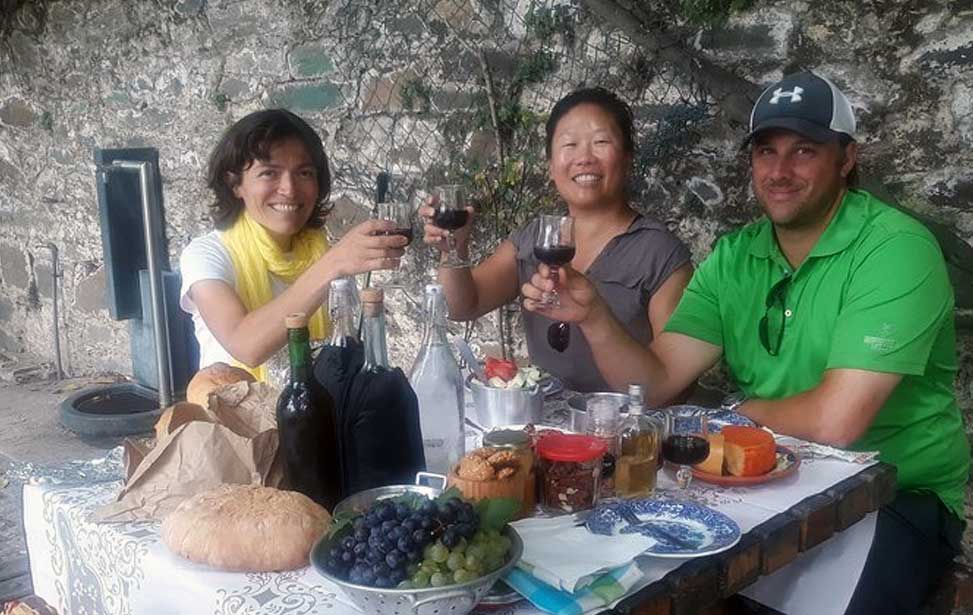 This walk allows us to visit two small but beautiful villages in the Douro. Our route will be towards Pinhão, through traditional paths that allow us to enjoy the valley. It is an accessible route, with a descending direction, with a total of seven km and that gives us an image of what the Douro is - an enchanted valley with its vineyards, olive groves and fruit trees and, at the same time, a region of hard and difficult work due to its slopes. At the end of the walk, we can have a picnic with homemade and local products - homemade bread, cheeses, smoked meats, olive oil, sweets, almonds… Douro table wine and Port wine are also included. Extra option to take a boat trip on the Douro river after the picnic. 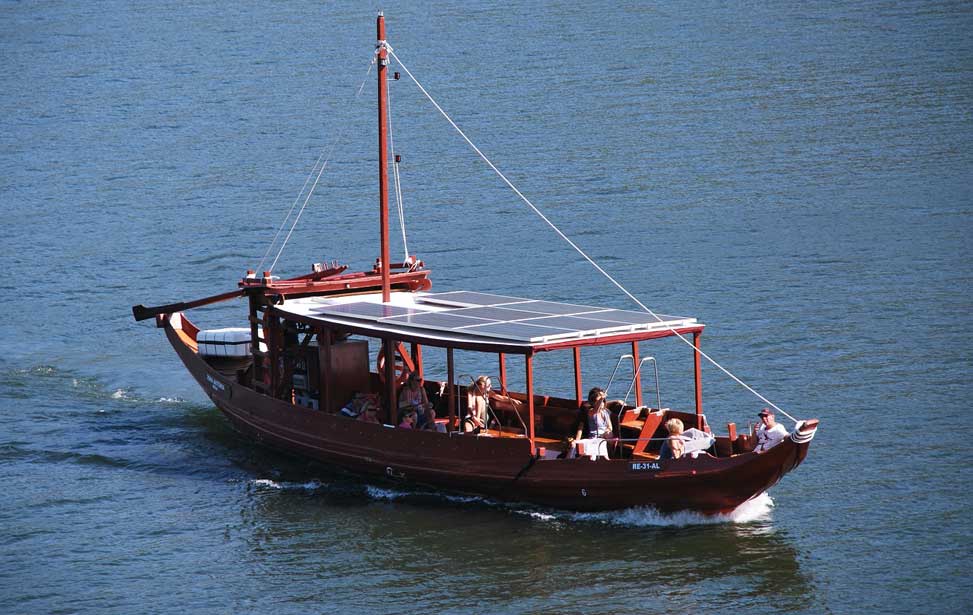 Set sail on a unique river cruise in the heart of the oldest demarcated wine region in the world and also a UNESCO World Heritage Site. Start your adventure in Pinhão, passing under the Eiffel iron bridge towards the area of Tua, where you will turn around to return to your starting point. Along the way, contemplate the hills from terraced vineyards to the river, without going through national highways and without encountering any traffic in sight. Although you travel the same route on the way back and forth, the impression will be that you have gone through two different paths, since the views provided and the landmarks seen are completely different. The traditional Rabelo boats have open and closed areas so that navigation will be totally comfortable in all types of weather, all year round. 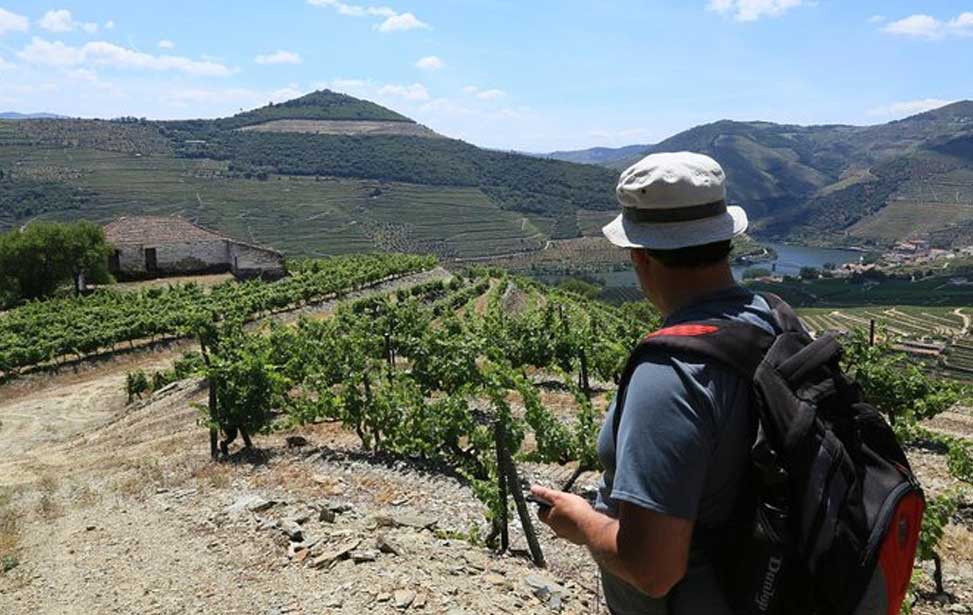 From Favaios to Pinhão Walking Tour

Spend half a day exploring Portugal’s famed Douro Valley on a private walking tour. After meeting your guide at Pinhão train station, enjoy experiences that include a tasting/tour at an olive oil museum, strolling through vineyards, stopping at Croft’s Quinta da Roeda for a Port tasting and tour, and enjoying a delicious picnic lunch at Quinta do Bomfim. Take a guided walking tour through Portugal’s Douro Valley wine region Get an insider’s view on the valley’s wine culture from an informative guide Enjoy wine tastings and a picnic lunch—they’re included in the tour price Get outside and take a walk through the region’s spectacular scenery. 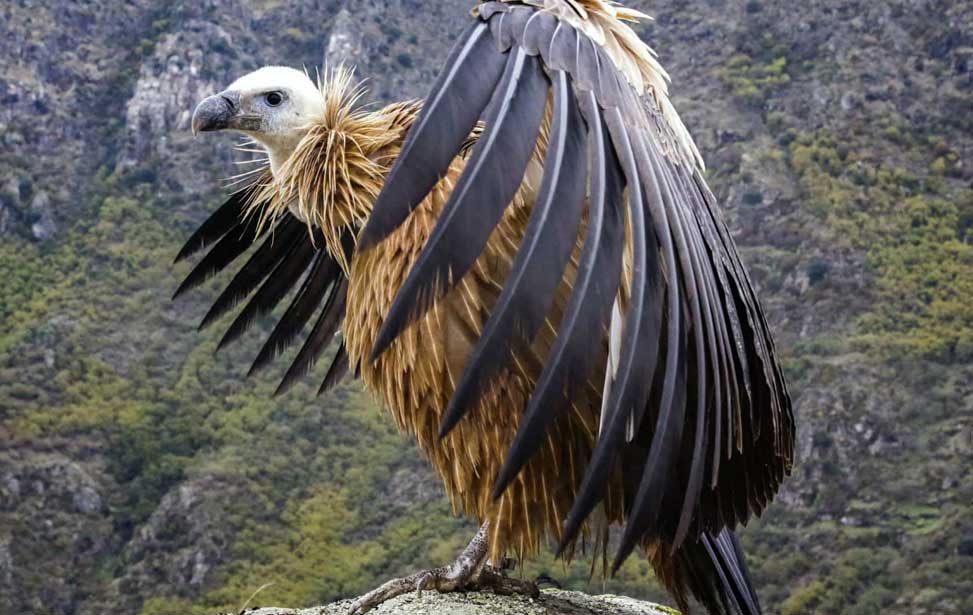 The remoteness of the Parque Natural do Douro Internacional makes it a haven for wildlife, including many species of rare fauna and flora, not found elsewhere in Portugal. If you're lucky you can encounter wolves, wild cats and otters, as well as various species of bats and amphibians. Birdwatchers flock here to admire the 170 species of wild birds who make this area their home. Species such as falcons, black storks and, during the summer season, griffon vultures (Gyps fulvus) and Europe’s densest concentration of Egyptian vultures (Britango).